Around 1850 rifled barrels were becoming popular. Rifled bores greatly improved the accuracy of firearms, both rifles and artillery pieces. This extended the effective range

2 Where the BALLISTIC COEFFICIENT Came From In 1742 Benjamin Robins, an English mathematician, invented the BALLISTIC pendulum. This device made direct measurements of bullet velocities possible. Up until then bullet velocities in flight had been calculated using an analysis of projectile trajectories published by Galileo in 1636. Galileo had thought that air drag was very small compared to gravity, so that a bullet traveled as if it were in a vacuum. This was because Galileo's experiments were with early firearms and the muzzle velocities of those arms were much less than the speed of sound in the air. The BALLISTIC pendulum immediately led to two momentous discoveries, (1) muzzle velocities of bullets were much higher than previously thought, and (2) bullets slowed down in flight much faster than had been predicted by Galileo's work. Both discoveries resulted from the fact that muzzle velocities at that time had increased to above the speed of sound.

3 These discoveries showed that air drag greatly affected bullet trajectories and could not be neglected. It was to be another century and a half before air drag was understood well enough to calculate bullet trajectories that were even approximately accurate. During that time countless experiments on air drag were made, together with a great deal of theoretical developments in mathematics and physics. But the situation around 1850 was that air drag on a projectile had to be measured; it could not be calculated from scientific knowledge in that day. [This situation is still largely true today for bullets.]. Up until about 1850, aiming a shoulder arm or handgun was little more than pointing the barrel at the target and pulling the trigger. Almost all arms were smoothbores and not very accurate. Targets were encountered at short ranges. Game animals were plentiful and were taken by hunters at very short ranges (typically 20 to 40 yards).

4 In warfare armies marched up to within point blank range of their muskets before firing ( Don't shoot until you see the whites of their eyes. -- Colonial Colonel William Prescott, Battle of Bunker Hill, June 17, 1775). Around 1850 rifled barrels were becoming popular. Rifled bores greatly improved the accuracy of firearms, both rifles and artillery pieces. This extended the effective range of fire well beyond 100 yards for rifles and several hundred yards for artillery. Weapon and ammunition technology advanced rapidly in the mid-1800s. Rifled barrels, elongated, pointed bullets, and improvements in the quality of black powder further improved muzzle velocities and the effective range of fire. This in turn created a need for precise aiming. To aim a weapon precisely it was necessary to know where the bullet would hit when the shot was made at a target, and then adjust the weapon sights or the hold so that the bullet would strike the target.

5 This means that the trajectory of the bullet had to be calculated accurately to form firing tables ( ballistics charts). Thus, aerodynamic drag on a bullet had to be measured. Many, many measurements of aerodynamic drag on a wide variety of projectiles were made from about 1850 until well after 1900. The early measurements consisted of a whole lot of data and many mysteries from the interpretation of those data. This was especially true because instrumentation was crude and the effects of different atmospheric conditions were not understood. There was a leap forward about 1870. The Reverend Francis Bashforth in England, who also was a mathematician and experimenter, had invented an early type of chronograph. Between 1865 and 1870 he made drag measurements on a variety of cylindrical artillery projectiles with different point shapes. From his observations he conceived the idea of a standard bullet.

6 This was a cylindrical flat-based bullet of a certain diameter, weight, length, and point shape. The idea was that drag could be measured on the standard bullet and then simply scaled in magnitude for practical bullets of the same basic shape but different weight and diameter. The basic shape that Bashforth chose was in fact pretty standard for all projectiles of that era, both rifle and artillery. Thus, there was to be a standard bullet with a measured standard drag.. Then each actual bullet would have a scale factor (a number) associated with it which would multiply the standard drag values to adjust them to be the actual drag on the actual bullet. The advantage of this approach was that drag measurements on each and every actual bullet could be avoided, provided that a way of determining the drag scale factor could be found. Theoretical work at that time provided a way to determine the drag scale factor, at least initially.

8 This not only avoided the necessity to measure the drag on every type of bullet at all bullet velocities, but it also led to great theoretical simplifications in calculating bullet trajectories. This in turn was wonderful, because the age of computers was still a century away. Formal Definition of the BALLISTIC COEFFICIENT Bashforth selected the diameter of the standard bullet to be one inch and the weight to be one pound. This meant that the denominator in the drag scale factor equation above was identically equal to : [dstd bullet ^ 2 / wstd bullet] = In turn this meant that, as long as the diameter of an actual bullet was measured in inches and weight was in pounds, the drag scale factor could be calculated as Drag scale factor = [dact byllet ^ 2 / wact bullet]. From this equation it appears that the drag scale factor has physical units of (sq in / lb), but this is not true.

9 It must be remembered that the right hand side of this equation is divided by (sq in / lb). The drag scale factor is a pure number; it has no physical units whatever. But, alas, a problem developed. It was discovered experimentally around 1880 that the drag scale factor computed in this manner did not give the correct answer for the drag on the actual bullet. The reason was not understood then, but today we know that even small changes in the size or shape of an actual bullet cause a different air flow around the bullet, and therefore change the drag on the actual bullet. To handle this situation a form factor (or shape factor ) was added to the equation above. This form factor is usually denoted by the letter i , and the equation is then written: Drag scale factor = [ i * dact bullet ^ 2 / wact bullet]. The form factor i was to be another constant, to be used to adjust the value of the drag scale factor so that it accurately predicted the drag on the real bullet. 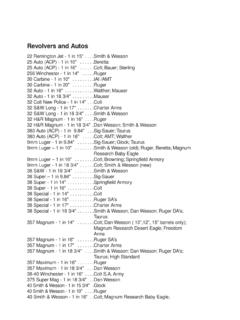 Introduction This article covers an attempt of mine to analyze some data I have come across regarding the Brown Bess Musket. Muzzle Velocity How the amount of powder loaded into the weapon affects the muzzle velocity is shown by the