The Book on The Taboo against knowing who you are

THE BOOK On the Taboo Against Knowing Who You Are ALAN WATTS Alan Watts, who died in 1974, held both a master's degree in theology and a doctorate …

2 By Sphere Books Ltd 30/32 Gray's Inn Road, London, WC1X 8JL. Reprinted 1976, 1977. First published in Great Britain by Jonathan Cape Ltd 1969. Copyright 1966 by Alan Watts This book is sold subject to the condition that it shall not, by way of trade or otherwise, be lent, re-sold, hired out, or otherwise circulated without the publisher's prior consent in any form of binding or cover other than that in which it is published and without a similar condition including this condition being imposed on the subsequent purchaser. Set in Monotype Times Roman Printed in Great Britain by Hazell Watson & Viney Ltd Aylesbury, Bucks To my Children and Grandchildren Joan Tia Ann * Mark *. David Richard Myra Elizabeth Lila Michael Christopher Diane ACKNOWLEDGMENTS.

3 The author is grateful to the following for permission to quote: Cambridge University Press for The Nature of the Physical World by Sir Arthur Eddington and My View of the World by Erwin Schr dinger; Prentice-Hall Inc. for Quantum Theory by David Bohm; William Collins & Sons Ltd for The Gospel According to Thomas, translated by A. Guillaumont and others; J. M. Dent & Sons Ltd for Collected Poems of Dylan Thomas; and Methuen & Co. Ltd for The Collected Poems of G. K. Chesterton. CONTENTS. PREFACE 9. 1 Inside Information 11. 2 The Game of Black-and-White 29. 3 How To Be a Genuine Fake 53. 4 The World Is Your Body 82. 5 So What? 100. 6 IT 125. THE BOOKS 143. PREFACE. THIS BOOK explores an unrecognized but mighty Taboo our tacit conspiracy to ignore who, or what, we really are.

4 Briefly, the thesis is that the prevalent sensation of oneself as a separate ego enclosed in a bag of skin is a hallucination which accords neither with Western science nor with the experimental philosophy-religions of the East in particular the central and germinal Vedanta philosophy of Hinduism. This hallucination underlies the misuse of technology for the violent subjugation of man's natural environment and, consequently, its eventual destruction. We are therefore in urgent need of a sense of our own existence which is in accord with the physical facts and which overcomes our feeling of alienation from the universe. For this purpose I have drawn on the insights of Vedanta, stating them, however, in a completely modern and Western style so that this volume makes no attempt to be a textbook on or introduction to Vedanta in the ordinary sense.

5 It is rather a cross-fertilization of Western science with an Eastern intuition. Particular thanks are due to my wife, Mary Jane, for her careful editorial work and her comments on the manuscript. Gratitude is also due to the Bollingen Foundation for its support of a project which included the writing of this book. Sausalito, California ALAN WATTS. January, 1966. CHAPTER ONE. INSIDE INFORMATION. JUST WHAT should a young man or woman know in order to be "in the know"? Is there, in other words, some inside information, some special Taboo , some real lowdown on life and existence that most parents and teachers either don't know or won't tell? In Japan it was once customary to give young people about to be married a "pillow book." This was a small volume of wood-block prints, often colored, showing all the details of sexual intercourse.

6 It wasn't just that, as the Chinese say, "one picture is worth ten thousand words." It was also that it spared parents the embarrassment of explaining these intimate matters face-to-face. But today in the West you can get such information at any newsstand. Sex is no longer a serious Taboo . Teenagers sometimes know more about it than adults. But if sex is no longer the big Taboo , what is? For there is always something Taboo , something repressed, unadmitted, or just glimpsed quickly out of the corner of one's eye because a direct look is too unsettling. Taboos lie within taboos, like the skins of an onion. What, then, would be The Book which fathers might slip to their sons and mothers to their daughters, without ever admitting it openly?

7 In some circles there is a strong Taboo on religion, even in circles where people go to church or read the Bible. Here, religion is one's own private business. It is bad form or uncool to talk or argue about it, and very bad indeed to make a big show of piety. Yet when you get in on the inside of almost any standard-brand religion, you wonder what on earth the hush was about. Surely The Book I have in mind wouldn't be the Bible, "the Good Book" that fascinating anthology of ancient wisdom, history, and fable which has for so long been treated as a Sacred Cow that it might well be locked up for a century or two so that men could hear it again with clean ears. There are indeed secrets in the Bible, and some very subversive ones, but they are all so muffled up in complications, in archaic symbols and ways of thinking, that Christianity has become incredibly difficult to explain to a modern person.

8 That is, unless you are content to water it down to being good and trying to imitate Jesus, but no one ever explains just how to do that. To do it you must have a particular power from God known as "grace,". but all that we really know about grace is that some get it, and some don't. The standard-brand religions, whether Jewish, Christian, Mohammedan, Hindu, or Buddhist, are as now practiced like exhausted mines: very hard to dig. With some exceptions not too easily found, their ideas about man and the world, their imagery, their rites, and their notions of the good life don't seem to fit in with the universe as we now know it, or with a human world that is changing so rapidly that much of what one learns in school is already obsolete on graduation day.

10 At the input end they even develop ganglia of nerves called brains, with eyes and ears, so that they can more easily scrounge around for things to swallow. As and when they get enough to eat, they use up their surplus energy by wiggling in complicated patterns, making all sorts of noises by blowing air in and out of the input hole, and gathering together in groups to fight with other groups. In time, the tubes grow such an abundance of attached appliances that they are hardly recognizable as mere tubes, and they manage to do this in a staggering variety of forms. There is a vague rule not to eat tubes of your own form, but in general there is serious competition as to who is going to be the top type of tube. All this seems marvelously futile, and yet, when you begin to think about it, it begins to be more marvelous than futile. 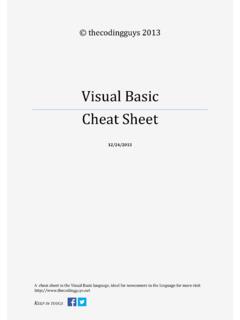 LANGUAGE BASICS INTRODUCTION Visual Basic has a simple syntax much of the language is easily understandable (that’s why it’s called Basic, doh). A few points: The language is not case-sensitive (So A and a are the same) 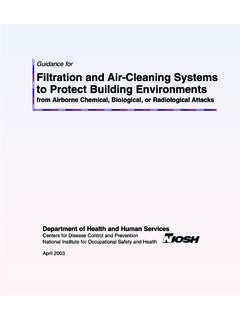 Guidance for Filtration and Air-Cleaning Systems to ...

Guidance for Filtration and Air-Cleaning Systems to Protect Building Environments from Airborne Chemical, Biological, or Radiological Attacks Department of Health and Human Services