The Chinese Medical Treatment of gout By Simon A. Becker, Dipl. Ac & CH (NCCAOM). Biomedical Disease Explanation of gout gout represents a recurrent acute arthritis of peripheral joints that results from deposition of urate crystals secondary to an increased serum uric acid level (hyperuricemia). The arthritis may become chronic and Uric acid is produced from the catabolism of purines. Purines, if not derived from diet, may stem from increased cell turnover with a high nucleoprotein (RNA/DNA) breakdown (which occurs in such diseases as lymphoma, leukemia, or hemolytic anemia) or may occur in cases where cellular proliferation and cell death is increased (such as in psoriasis).

4Ibid., 705 5He Chui-ting, “The Chinese Medical Treatment of the Quiescent Period of Gout,”Xin Zhong Yi(New Chinese Medicine) 31 (May 1999): 3-5. 6 Joint running is short for joint running wind (li jie feng).This disease was mentioned for the first time in the Jin Gui Yao Lue (Prescriptions of the Golden Coffer) and refers to redness and swelling of the …

1 The Chinese Medical Treatment of gout By Simon A. Becker, Dipl. Ac & CH (NCCAOM). Biomedical Disease Explanation of gout gout represents a recurrent acute arthritis of peripheral joints that results from deposition of urate crystals secondary to an increased serum uric acid level (hyperuricemia). The arthritis may become chronic and Uric acid is produced from the catabolism of purines. Purines, if not derived from diet, may stem from increased cell turnover with a high nucleoprotein (RNA/DNA) breakdown (which occurs in such diseases as lymphoma, leukemia, or hemolytic anemia) or may occur in cases where cellular proliferation and cell death is increased (such as in psoriasis).

2 Furthermore, ethanol consumption accelerates ATP. catabolism and slightly decreases glomerular filtration rate, thus increasing uric acid levels in the blood. Because in these instances an underlying cause for the hyperuricemia can be determined, one refers to this as secondary gout . If purines are synthesized de novo or if an unexplained decrease in urinary clearance of uric acid leads to hyperuricemia, gout is called primary gout (no underlying disease is present). A. decreased urinary clearance of uric acid is by far the more common cause of primary gout and 75% to 90%.

3 Of all cases suffering from primary gout result from an as yet unexplained impairment of uric acid excretion by the kidneys. 2. At C, plasma is saturated with uric acid at levels above mg/dL. Urate solubility at 30 C is 4. mg/dL. Therefore, urate crystals precipitate and deposit in the distal peripheral joints and in cooler tissues such as the ears. Such crystals may also deposit in the kidneys and lead to renal failure (leading to an even further decrease of uric acid clearance) and urate stones.

4 Clinically, gout is divided into four stages: asymptomatic hyperuricemia often precedes acute attacks of gout and does not manifest with any symptoms. During acute gouty arthritis, the second stage, the joints of especially the metatarsophalangeal joint of the big toe, but also the ankles, knees, and possibly upper arm joints are involved. The attacks commonly start at night and are very painful. The involved joint or joints are swollen, red, and exquisitely tender. The overlying skin is often tense, warm, shiny, and red or purplish.

5 Acute gout may be precipitated by a large and rich meal (lots of fats and purine containing foods), alcohol, trauma, emotional stress and Medical stress. The third stage is the intercritical period (henceforward referred to as the quiescent period) during which no acute attacks occur and which can last up to ten years. However, subsequent attacks tend to be increasingly severe, prolonged, polyarticular, and even febrile. 3 Initial acute attacks last only a few days but later untreated attacks may persist for weeks.

6 The fourth and last stage is termed tophaceous gout . This appears in patients with uncontrolled gout in whom the uric acid levels are not stabilized at normal or only slightly elevated levels. Tophi appear in the cartilage, synovial membranes, tendons, and soft tissues, and they represent crystal aggregates and, during the later stages of gout , can be felt as subcutaneous nodules. If they rupture, a chalky white mass of urate crystals may be discharged. The bursa walls and tendon sheaths are frequently affected and chronic joint symptoms with joint deformity and limitation of motion may develop during the later stages of disease when acute attacks are more frequent.

7 Crystal deposits in the kidneys lead to urate stones which account for 10% of all renal calculi; up to 25% of patients with gout are affected by this ailment. Furthermore, renal failure secondary to urate deposits in the renal interstitium account for 10% of deaths in patients 1. The Merck Manual, 16th ed. (Rahway, NJ: Merck & Co., 1992), 1346. 2. Emanuel Rubin and John L. Farber, Essential Pathology, 2nd ed. (Philadelphia: J. B. Lippincott Co., 1995) 704. 3. Ibid., 705. suffering from Western Medical Treatment of gout is threefold.

8 First, acute attacks need to be relieved. Colchicine is the drug of choice and is often immediately effective. However, the side effects of vomiting and diarrhea frequently prohibit or at least complicate administration. Second, serum urate levels must be lowered and dissolution of urate deposits increased. Besides avoiding foods high in purines and abstaining from alcohol, drugs such as allopurinol, which inhibits uric acid synthesis, and uricosuric drugs such as probenecid and sulfinpyrazone which inhibit urate resorption by the renal tubules are frequently administered during the quiescent period.

9 Allopurinol can actually dissolve established calculi; however, it causes GI distress, skin rashes, and leukopenia. Third, future attacks may be prohibited by administering colchicine prophylactically during the quiescent period. Furthermore, nonsteroidal anti-inflammatory drugs are often administered for 2 to 3 days during acute attacks. Here, it is important to avoid salicylates as they antagonize uricosuric drugs; acetaminophen provide comparable analgesia without interfering with uricosuric drug actions. 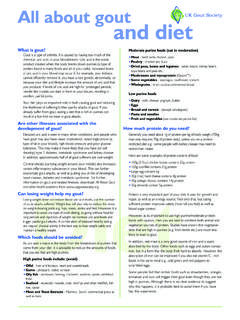 All about gout and diet - The UK Gout Society: Gout

Diet All about gout and diet What is gout? Gout is a type of arthritis. It is caused by having too much of the chemical, uric acid, in your bloodstream. 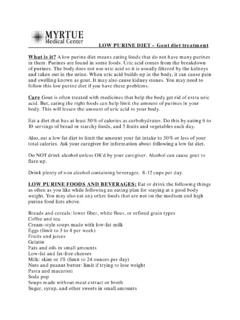 LOW PURINE DIET – Gout diet treatment. What is it? A low purine diet means eating foods that do not have many purines in them. Purines are found in some foods. 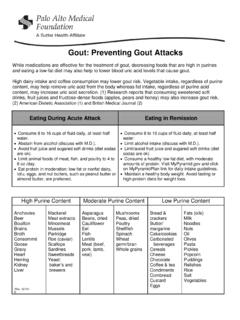 Gout: Preventing Gout Attacks While medications are effective for the treatment of gout, decreasing foods that are high in purines and eating a low-fat diet may also help to lower blood uric acid levels that cause gout. 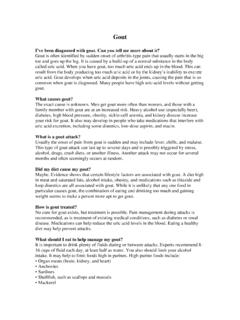 Gout I’ve been diagnosed with gout. Can you tell me more about it? Gout is often identified by sudden onset of arthritis-type pain that usually starts in the big 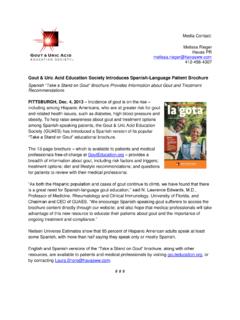 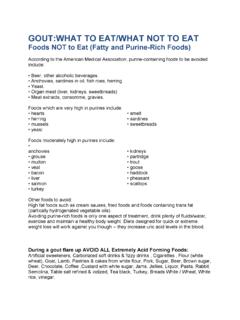 GOUT:WHAT TO EAT/WHAT NOT TO EAT Foods NOT to Eat (Fatty and Purine-Rich Foods) According to the American Medical Association, purine-containing foods to …

What, Gout, What to eat what not