The Cholesky Decomposition - Part I

2 The probability distributions associated with each random variate and the three independent random variates pulled from those distributions Table 1 - Probability Distributions and Three Independent Random Variates Symbol Description Distribution Mean Standard Deviation Random Variate 1 Revenue growth rate Normal ( ). 2 Expenses to revenue Normal 3 Cap ex to revenue Normal Example: Given that revenue for the prior year was $1,000,000 simulated cash flow for the current year using cash flow Equation (1) and the three random variates from Table 1 Ct = $1, 000, 000 (1 + ( )) (1 ) = $34, 538 (2). The correlation matrix below represents the correlations of cash flow Equation (1) random Table 2 - Correlation Matrix 1 2 3. 1 2 3 Question: The three random variates in Table 1 are independent and therefore the Monte Carlo simulated cash flow (via Equation (2)) does not reflect the correlation matrix as defined in Table 2 above.

4 Given that the random variates are independent the expected values of the product of each xi xj pair in vector ~x where i [1, 2, 3], j [1, 2, 3] and i 6= j E[x1 x2 ] = 0 .. E[x1 x3 ] = 0 .. E[x2 x3 ] = 0 (7). Adding Dependence Via A Linear Transformation We have the linear transformation T : R3 R3 such that T (~x) = A~x. The matrix A is the transformation matrix for T with respect to the standard basis and is in the following . a11 a12 a13. A = a21 a22 a23 (8). a31 a32 a33. As noted above vector ~x consists of independent, normally-distributed random variates each with mean zero and variance one. We want to apply a linear transformation to vector ~x such that the matrix:vector product of this transformation is vector ~y, which is a vector in R3 that consists of dependent, normally-distributed random variates with mean zero and variance one. 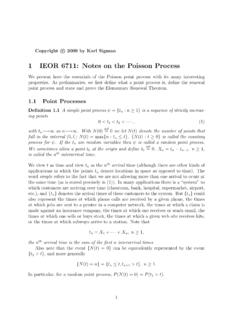 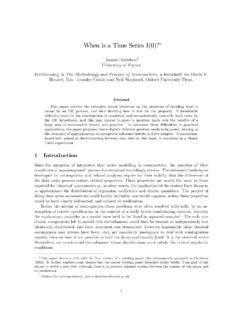 When is a Time Series I(0)? James Davidsony University of Exeter Forthcoming in The Methodology and Practice of Econometrics, a festschrift for David F.

Series, Time, When, When is a time series 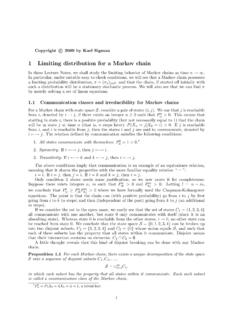 1 Limiting distribution for a Markov chain

6711: Notes on the Poisson Process, Process, When is a Time Series, Markov chain