THE COMPOSITION OF THE ADULT HUMAN BODY …

THE COMPOSITION OF THE ADULT HUMAN BODY AS. DETERMINED BY CHEMICAL ANALYSIS*. BY R. M. FORBES, A. R. COOPER, AND H. H. MITCHELL. (From the Division of Animal Nutrition, Urbana, Illinois, and the Department of Anatomy, University of Illinois, Chicago, Illinois). (Received for publication, January 19, 1953). Published analytical data on the chemical COMPOSITION of the ADULT , HUMAN body are scant, and statistically inadequate. References to the earlier Downloaded from by guest on July 29, 2018. literature may be found in a previous communication from this labora- tory (1) and in a more recent contribution by Widdowson, McCance, and Spray (2), which are the most complete reports available.

THE COMPOSITION OF THE ADULT HUMAN BODY AS DETERMINED BY CHEMICAL ANALYSIS* BY R. M. FORBES, A. R. COOPER, AND H. H. MITCHELL (From the Division of Animal Nutrition, Urbana, Illinois, and the Department of

Human, Adults, Compositions, The composition of the adult human

1 THE COMPOSITION OF THE ADULT HUMAN BODY AS. DETERMINED BY CHEMICAL ANALYSIS*. BY R. M. FORBES, A. R. COOPER, AND H. H. MITCHELL. (From the Division of Animal Nutrition, Urbana, Illinois, and the Department of Anatomy, University of Illinois, Chicago, Illinois). (Received for publication, January 19, 1953). Published analytical data on the chemical COMPOSITION of the ADULT , HUMAN body are scant, and statistically inadequate. References to the earlier Downloaded from by guest on July 29, 2018. literature may be found in a previous communication from this labora- tory (1) and in a more recent contribution by Widdowson, McCance, and Spray (2), which are the most complete reports available.

2 An important application of such data relates to the validity of met,- abolic balance studies of nitrogen, calcium, iron, etc., as measures of the daily net requirements of humans for these nutrients. If the results of such studies, conducted at various stages of growth, are integrated, and the total amount. of nutrients so calculated to be present in the ADULT are in good agreement with analytical data obtained by direct chemical anal- ysis of the ADULT ,, then the use of metabolic balances for the above purpose would appear to be a valid technique. Methods and Materials The subject was a white male 46 years of age, kilos in weight, and cm.

3 Tall. Other measurements taken were as follows: stem length (top of head to perineum) by calipers cm., shoulder (biacromial). width cm., width between iliac crests cm., circumference of upper chest cm. Death was due to a skull fracture as a result of a fall; a postmortem ex- amination performed by one of the authors (A. R. C.) confirmed this diag- nosis and revealed hypostatic congestion of the lungs. No other abnor- malities were noted. The use of Edwards' nomogram (3) leads to the conclusion that this specimen was 23 per cent below the average weight for his age and height. His appearance was that of a moderately thin man in good physical con- dition.

4 After admission of the patient to the hospital in an unconscious state, medication consisted of penicillin and intravenous dextrose and saline; 4. * The data reported in this paper were secured in the course of an investigation of the trace element content of HUMAN tissues, covered by the Atomic Energy Com- mission contract No. AT(ll-l)-67, project 7, with the University of Illinois. 359. 360 COMPOSITION OF HUMAN BODY. hours before death, 5 days after admission, 30 gm. of aminopyrine were given for elevated temperature. The body was preserved at 4-5 for the 1st week after death, and by freezing at -18 until dissection was started 1 month later.

5 Dehydra- tion during storage in the frozen state was limited to per cent of the body weight by wrapping the specimen in a plastic sheet. Dissection of the cadaver to obtain the various organs and tissues de- sired for study was made under the supervision of two of the authors (A. R. C. and R. M. F.). Care was taken to minimize and to measure moisture loss during all the steps of preparation of the samples. Since trace min- eral elements were to be determined, particular precautions were taken to Downloaded from by guest on July 29, 2018. prevent contamination. The dissection was performed on a stainless steel table covered by a polyvinyl sheet, and all the instruments used were of stainless steel.

6 The organs and tissues, as soon as obtained, were placed in bags of polyvinyl plastic. When dissection was completed and the sam- ples were weighed, representative portions of the larger samples and all of the smaller samples were placed in stainless steel containers with close fitting covers, and all the samples were autoclaved at 15 pounds pressure for 45 minutes. Following this, the containers were sealed and the samples preserved by freezing until prepared for chemical analysis. Soft tissue samples were prepared for analysis by first being diced in a porcelain bowl with stainless steel knives. After thorough mixing, a por- tion was removed for macronutrient analysis and was ground in a power grinder.

7 The remainder was reserved for subsequent analysis for trace element content. Representative portions of the skeleton were commi- nuted as finely as possible with an iron mortar and pestle. The entire left tibia, ulna, and femur were so treated and analyzed separately. Moisture was determined on all the samples by drying them to constant weight in a vacuum oven at 70 . Ether extraction of the dried samples was accomplished by the Soxhlet principle, a low boiling petroleum ether being used for 48 hours. Total nitrogen was determined by the Kjeldahl- Wilfarth-Gunning method with mercury as a catalyst; the samples were di- gested for 4 hours after clearing.

8 The factor was used to convert ni- trogen data to protein equivalent. Ash was determined with a muffle furnace at 600 . Calcium and phosphorus were determined on the ash, calcium in bones by permanganate titration of the oxalate (according to the method of the Association of Official Agricultural Chemists), calcium in soft tissues by calorimetry (4), and phosphorus in bone by the standard phosphomolybdate titrimetric procedure and in soft tissues by the color- imetric procedure of the Association of Official Agricultural Chemists. The total weight of the individual tissues and organs was kilos less than the weight of the cadaver when dissection was started.

9 This loss . is treated as water in adjusting all the results to the original fresh basis. FORBES, COOPER, AND MITCHELL 361. EXPERIMENTAL. The analytical results obtained on the organs and tissues are shown in Table I, as is the precentage contribution of each chemical subdivision to TABLE I. Chemical COMPOSITION of ADULT HUMAN Body The values are given in per cent. water Ether rxtract Ash Ca P. Skin.. Downloaded from by guest on July 29, 2018. Skeleton.. Teeth .. * * Striated muscle.. Brain, spinal cord, nerve trunks.. Liver .. Heart.. Spleen*.. Kidneys .. Pancreas*.. Alimentary tract .. Adipose tissue.. Remaining tissue, solid liq- uid.

10 Bile, content of blad. der and alimentary tract .. Hair and nails.. -- Average (weighted). all .. Total COMPOSITION whole body weigh. ing .. COMPOSITION fat- free body.. * Chemical COMPOSITION assumed. t Congested with blood. the entire body. The last three horizontal rows of figures show the compo- sition of the entire body on the various basesindicated. On the basis of the tissuesanalyzed, or for which analyses were assumed,only per cent is unaccounted for. Table II shows the macronutrient COMPOSITION of the three normal . 362 COMPOSITION OF HUMAN BODY. specimens for which these data are available. Owing to the variation in fat content, the data are presented on the fresh and on the fat-free basis. 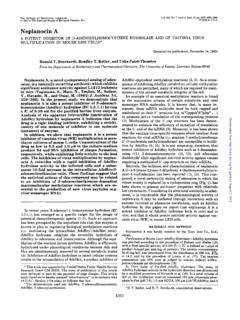 4354 Antiviral Action of Neplanocin A HOCHL, yy Pl OH OH FIG. 1. Structure of neplanocin A. units of intestinal adenosine deaminase. The reaction was started by the addition of AdoHcy hydrolase and incubated for 5 min at 37 "C. 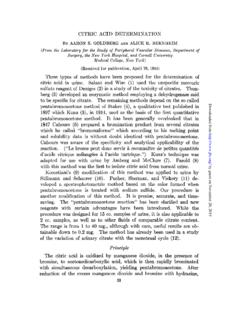 CITRIC ACID DETERMINATION - The Journal of …

CITRIC ACID DETERMINATION BY AARON S. GOLDBERG AND ALICE R. BERNHEIM (From the Laboratory for the Study of Peripheral Vascular Diseases, Department of Surgery, the New York Hospital, and Cornell University

THE CITRIC ACID FERMENTATION OF …

Bleaching of Melanin Pigments - Journal of …

THE JOURNAL OF BI~L~CICAL CHEMISTRY 0 1990 by The American Society for Biochemistry and Molecular Biology, Inc. Vol. 265, No. 21, Issue of … E-mail: Gunilla.Olivecrona@medbio.umu.se Running Title: Recombinant human lipoprotein lipase and molecular chaperones ... for metabolism of blood lipids. LPL is regulated by yet unknown post-translational events affecting the levels of active dimers. On co-expression of LPL with human molecular ... of N-linked carbohydrate is often a … THE DETECTION AND ESTIMATION OF REDUCING …

THE DETECTION AND ESTIMATION OF REDUCING SUGARS. BY STANLEY R. BENEDICT. (From the Shefield Laboratory of Physiological Chemistry, Yale University.) ... 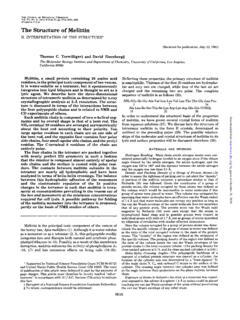 THE JOURNAL OF BIOLOGICAL CHEMISTRY Vol. …

Melittin, a small protein containing 26 amino acid residues, is the principal toxic component of bee venom. It is water-soluble as a tetramer, but it spontaneously 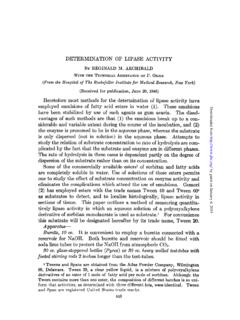 DETERMINATION OF LIPASE ACTIVITY - The …

DETERMINATION OF LIPASE ACTIVITY BY REGINALD M. ARCHIBALD WITH THE TECHNICAL ASSISTANCE OF P. ORTIZ (From the Hospital of The Rockefeller Institute for Medical Research, New York) 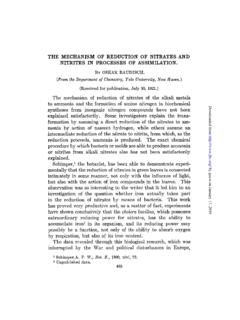 THE MECHANISM OF REDUCTION OF NITRATES …

490 Nitrates and Nitrites in Assimilation warranted a purely chemical investigation of the reduction of inorganic nitrates by means of iron salts. 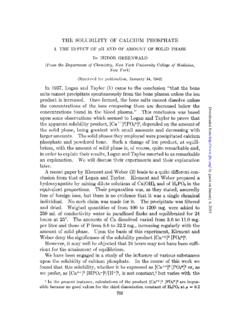 THE SOLUBILITY OF CALCIUM PHOSPHATE

706 SOLUBILITY OF CALCIUM PHOSPHATE. I dissolved in approximately 0.02 N HCl, which was allowed to run through by gravity. In these filtrates, evaporated if necessary, phosphorus was 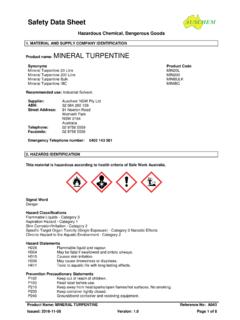 This is not a controlled document. To obtain the most recent MSDS please go to www.bostik.com.au Product name: Bostik 1850 Substance Key: BOS0008401 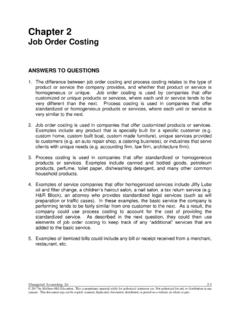 Managerial Accounting, 3/e 2-1 © 2017 by McGraw-Hill Education. This is proprietary material solely for authorized instructor use. Not authorized for sale or distribution in any