The Cuddletech Guide to SNMP Programming

2 snmp can often seem quite confusing and overly complicated, its available APIs tend to put alot of wrapping around what should be very simple. The available books on the topic tend to only complicate the subject, not demystify it. snmp is extremely easy for any programmer to understand. A gross over simplification can explain the system simply. A network device runs an snmp . agent as a daemon process which answers requests from the network. The agent provides a large number of Object Identifiers (OIDs). An OID is a unique key- value pair. The agent populates these values and makes them available. An snmp manager (client) can then query the agents key-value pairs for specific information. From a Programming standpoint it's not much different than im- porting a ton of global variables. snmp OIDs can be read or written. While writing information to an snmp device is fairly rare, it is a method used by several management applications to control devices (such as an administrative GUI for your switches).

3 A basic authentication scheme exists in snmp , allowing the manager to send a community name (think cleartext password) to autho- rize reading or writing of OIDs. Most devices use the insecure community name public . snmp communication is preformed via UDP on ports 161 and 162. Notice that I didn't mention MIBs yet! The importance of MIBs are greatly overrated. MIBs look complicated at first, but they are extremely simple. OIDs are numerical and global. An OID looks similar to an IPv6 address and different vendors have different prefixes and so forth. The OIDs are long enough that it's complicated for a human to remember or make sense of them, so a method was devised for translating a numeric OID into a human readable form. This translation mapping is kept in a portable flat text file called a Management Information Base or MIB. You do not need a MIB to use snmp or query 2. CHAPTER 1. INTRODUCTION TO snmp 3. snmp devices, however without a MIB you'll have to simply guess what the data your looking at means.

4 In some cases this is easy, such as seeing host names, disk usage numbers, or port status information. Other times it can be more difficult and a MIB is more useful. It is not unusual for some applications to be written using strictly numeric IODs allowing the end user to avoid the hassles of properly installing a MIB. The action of installing a MIB is really just putting it in a place where your snmp client application can find it to perform the translation. snmp can be used in 2 ways: polling and traps. Polling just means that you write an application that sets an snmp GET request to an agent looking some value. This method is useful because if the device responds you get the information you want and if the device does not respond you know there is a problem. Polling is an active form of monitoring. On the other hand, snmp . traps can be used for passive monitoring by configuring an agent to contact another snmp agent when some action occurs. Looking at traps deeper, a network device such as a router can be configured to send snmp traps for certain events.

5 For instance, you can configure Cisco IOS to send traps either when an individual event occurs such as a linkDown (IOS: snmp -server enable traps snmp linkdown) or when any defined trap event happens (IOS: snmp -server enable traps snmp ). When a trap event occurs, the agent on the device will send the trap to a pre-configured destination commonly called a trap host. The trap host will have it's own agent running which will accept and process the traps as they come in. The processing of these traps are done by trap handlers. Trap Handlers can be written in any language and are provided with information from the sent trap via STDIN. The handler can then do whatever is appropriate to respond to the trap, such as sending email or doing anything else you could want. snmp is most commonly used in conjunction with a Network Management System (NMS). Popular NMS's include BMC Patrol, CA Unicenter, Sun Man- agement Console (formerly SyMon), IBM Tivoli NetView, and the world famous HP OpenView.

6 Even an Open Source NMS is now available, the aptly named OpenNMS. The goal of a NMS is to provide a single point of monitoring and administration of all your snmp enabled devices. By configuring your device agents to allow write access you can even manipulate your environment from a single application. When an environment is architected around a NMS solution you can be given unparalleled levels of control and visibility over your entire en- vironment at a glance. While Net- snmp provides all the tools you would need to build your own NMS we won't discuss the subject any further here. However, bear in mind that if you think the vendor of your snmp enabled device isn't as forthcoming about details of their agent implementation as you'd like, it's most likely because they would like you to simply buy their NMS or a plug-in to use their device with one of the other popular NMS's. CHAPTER 1. INTRODUCTION TO snmp 4. Three Flavors of snmp . Three different version of snmp exist: SNMPv1 (RFC's 1155, 1157, and 1212), SNMPv2c (RFC's 1901 through 1908), and SNMPv3 (RFC's 3411 though 3418).

7 The co-existence of all three versions are detailed in RFC 3584. SNMPv1 is the original standard for community based management. SN- MPv2 was derived from the SNMPv1 framework but had no message definition, which was later revamped aa SNMPv2c, a community based version of SN- MPv2 with a message format similar to SNMPv1. SNMPv2 added several new datatypes (Counter32, Counter64, Gauge32, UInteger32, NsapAdress, and BIT. STRING), as well as enhancements to OID tables and the setting of OID values. SNMPv3 is an extensable SNMPv2 framework with a new message format, ACL. and security abilities, and remote configuration of snmp parameters. snmp is based on several other standards including the Abstract Syntax Notation 1 Basic Encoding Rules ( BER) which defines the snmp used Datatypes and the Structure of Management Information (SMI) which details the grammar used by snmp MIBs. SMI comes in two varieties: SMIv1 (RFC. 1155) and SMIv2 (RFC 2578). SMIv1 is now obsolete and should not be used.

8 If you choose to modify MIBs at some point you'll need to learn SMIv2 and syntax, but otherwise they are interesting but unnecessary to learn. To this day, SNMPv1 and SNMPv2c are the most commonly used, however due to the insecurity inherent to these protocols read-only access is typical. In general, don't bother with SNMPv3 unless you really need the added security features. What we won't discuss There are several subject we will not be discussing in this paper. These topics include writing agents or sub-agents, writing MIB modules, trap generation and trap sending, synchronous vs asynchronous snmp coding, and MIB parsing. Something that scares new or inexperienced coders away from the Net- snmp . documentation is the seemingly constant reference to synchronous and asyn- chronous applications. Don't be afraid, thats referring to applications that can't afford to sit and wait for a response. If your application needs a non-blocking method of handling snmp traffic, use the asynchronous interface (eg: GUIs, Threads, Forking, etc).

9 Otherwise, just stick with the synchronous interfaces for typical use. Lastly, this document addresses the use of Net- snmp on UNIX systems only. Please refer to the Net- snmp website for information regarding development on Win32. Chapter 2. MIBs & OIDs OIDs, or Object Identifiers, uniquely identify key values offered by an snmp . agent. MIBs, or Management Information Bases, provide a map between nu- meric OIDs and a textual human readable form. OIDs snmp OIDs are laid out in a hierarchy forming unique addresses into a tree similar to the DNS hierarchy. Like many other forms of addressing, OIDs can be used in 2 forms: fully qualified and relative (sometimes called relevant ). The fully qualified form starts from the root and moves outward to the individual value on a device. An example of a fully qualified address is: . This OID could be rewritten in human readable form as: . All fully qualified OIDs will begin with . repre- sented numerically as . Almost all OIDs will then be followed by enterprises (.)

10 1) and a unique number for the vendor as assigned by the Inter- net Assigned Numbers Authority (IANA). In the example OID 789 represents the vendor ID for the Network Appliance Corporation (NetApp). Everything beyond the vendor ID is based on the vendors implementation and may vary between implementations. Please note the prefixing dot before iso. Similar to the trailing dot in DNS, properly qualified IODs begin with a dot representing the root. The complete list of enterprise assignments can be found at the IANA web- site: The relative form of an OID, on the other hand, begins from the enterprises value and leaves all the implied addressing off. So we can use the relative form of 5. CHAPTER 2. MIBS & OIDS 6. the above OID as or numerically as .. A common form of writing OIDs is by the name of the MIB and a unique key defined within the MIB. For instance, we could rewrite the above OID. into the condensed form NETWORK-APPLIANCE- . This condensed form follows the convention of MIB Name::Unique Some keys, while unique, can be represented by multiple instances of that key, and thus all OIDs end with an instance value.

WHY YOU SHOULD CHOOSE DHL AIR FORWARD … 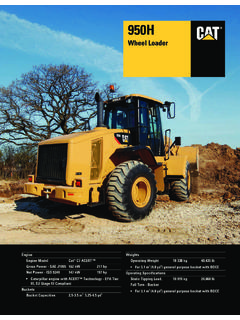 2 950H Wheel Loader H-Series Wheel Loaders - The New Standard For Midsize Loaders Performance you can feel with the capability to work in the most demanding applications.