THE DUKE LACROSSE CASE: EXPLOITING THE ISSUE OF …

PAGE 5 THE DUKE LACROSSE CASE: EXPLOITING THE ISSUE OF FALSE RAPE ACCUSATIONS cities to help assess the representatives of these statistics. Lastly, the authors cite a recent Department of Defense report, findings that need to be

2 I have no grounds to question the accuracy of the facts in this book, but I was astonished at the lessons the authors draw from the case . Feminist overkill, proclaim the authors. Men as demons, men accused of rape often face a de facto presumption of guilt that is hard to dispel no matter how strong the evidence of innocence the charges have gone too far, driven by radical feminists' wild exaggerations of the extent of male sexual predation and female victimization and their empirically untenable view that women never (or hardly ever) lie about rape. (Taylor & Johnson, 2007, ). These are the learnings authors Stuart Taylor, Jr. and KC Johnson take from the duke LACROSSE case . But is the duke case really emblematic of what is going on in the world of rape prosecutions? To prove that it is, the authors have to demonstrate that false rape allegations, and prosecutors' reliance upon them, represent a serious problem in the today.

3 They cite several pages of evidence reporting that false rape claims are in the neighborhood of 50%. Can these statistics be correct? The determination that a report is false can only be made when there is sufficient evidence to establish that the sexual assault did not happen. This does not mean that the investigation failed to prove that the sexual assault occurred or was unable to produce enough evidence to proceed; that is an unfounded or unsubstantiated case . To be labeled PAGE 1. THE duke LACROSSE case : EXPLOITING THE ISSUE OF FALSE RAPE ACCUSATIONS. false, there must be evidence that the sexual assault never actually happened, which will usually only be seen after a thorough investigation has been conducted. In reporting sexual assaults to the FBI in the Uniform Crime Reports, or UCR program, police departments are allowed to list rape reports as unfounded, which means either that they are false ( , they did not happen) or baseless ( , something happened but it did not meet the elements of a sexual assault offense).

4 It does not include reports that are unsubstantiated ( , there is insufficient evidence to prove that the rape happened). In fact, there is no unique category in the UCR program for these cases; they should technically be left open by the police department and never closed ( , cleared) using UCR criteria. This is certainly complicated, but it only gets worse. Because baseless reports make up a sizable percentage of those that are deemed unfounded, this means that the term cannot be used interchangeably with the notion of false reports. In other words, people often use the term unfounded to mean false, but this is technically in error because unfounded reports in the UCR program include both those that are false as well as those that are baseless. The distinction is understandably difficult to grasp, so it is not surprising that this confusion has crept into discussion of false rape reporting, little helped by the lack of clear criteria in the UCR definitions.

5 With these distinctions in mind, let's look at how they translate into real life situations. What are examples of false rape reports? The clearest is the woman who cried rape to the 911. operator to get the police officers to come more quickly during a domestic altercation and who readily admitted it when the police arrived. Another example would be the case in which police later determined that the alleged victim herself wrote a note attributed to the suspect or who herself purchased materials purportedly used in the sexual assault. The difficulty of ascertaining false rape reports in any kind of research study is brought home by some cases labeled false which later turn out to be all too true. In one instance, DNA evidence five years later linked a sex offender to a blind woman who said her intruder raped her at knifepoint, but who was disbelieved and even charged with lying about the episode.

6 The City has apologized, offering the woman $35,000. In still another case , a DNA. check nabbed a perpetrator who then could be linked to an earlier rape accusation in New York City. Queens detectives had thought the high school sophomore had faked the attack to cover up an unwanted pregnancy and had charged her with filing a false report, for which she was sentenced to picking up garbage for three days (Lonsway, Archambault, &. Berkowitz, 2007). Even complainant recanting causes difficulties. Some may argue that victim recantations PAGE 2. THE duke LACROSSE case : EXPLOITING THE ISSUE OF FALSE RAPE ACCUSATIONS. are enough to put a case into the category of a false report. But because many victims recant when they encounter skepticism, disbelief or blame, or because they find their disclosure makes matters worse or more dangerous for them, some experts believe that recantations cannot be used as the only evidence to determine whether a report is false.

7 Those in the domestic violence field are all too familiar with this dynamic, and realize that just because the victim recants does not mean the abuse did not happen. All this is to cause reasonable minds to agree that determining just what is a false rape claim puts one into a thicket of problems and issues. Given all this, we may never know the true number of false rape claims. A few research projects have attempted to determine the percentage of false reports; that is, researchers attempt to determine the number of cases in which the evidence definitely proves that the accusation is false. The Portland, Oregon police department examined 431. complaints of completed or attempted sexual assault in 1990, and found that were determined to be false, in comparison to a rate of of false reports for stolen vehicles. The San Diego Police Department Sex Crimes Division routinely evaluated the rate of false reports over several years and found them to be around 4%.

8 In a recent study of 2,643. sexual assault cases reported to British police, 8% were classified as false allegations. Yet when researchers applied the actual criteria for a false report, as opposed to an unsubstantiated or unfounded report, the figure dropped to 2% (Lonsway, Archambault, &. Berkowitz, 2007). It is often said that there are many more false rape reports than for any other crime. But the rate of false reporting for property offenses such as arson, auto theft, and burglary, offenses in which there is a lot of insurance fraud, may be just as high. Yet no ink is spilled about the horrors of false reporting of property crimes. So back to Taylor and Johnson's 50% figure for false rape claims. Let's examine the three major documents on which the authors rely. The first expert is Linda Fairstein, a former Manhattan sex crimes prosecutor. Taylor and Johnson quote a November 2003.

9 Cosmopolitan magazine article, Why Some Women Lie About Rape, authored by Fairstein, as follows: These falsehoods trivialize the experience of every rape survivor. Fairstein also wrote, There are about 4,000 reports of rape each year in Manhattan. Of these, about half simply did not happen. (Taylor & Johnson, 2007, ). What did not happen in the Cosmopolitan article is that last sentence. In a recent e-mail correspondence, Ms. Fairstein informed me that the quote was inaccurate and that a PAGE 3. THE duke LACROSSE case : EXPLOITING THE ISSUE OF FALSE RAPE ACCUSATIONS. correction had been made on one of the author's websites. There, KC Johnson admitted the error, indicating that the material had been taken from someone else's website and that neither of the authors had consulted the original article. Next, the authors cite a research study by Purdue sociologist Eugene Kanin, who summarized rape reports in a small Midwestern town between 1978 and 1987, finding that the police department determined 41% of them to be false.

10 This is another study that is frequently cited on web sites devoted to debunking the prevalence of rape. During this ten- year period, the police department followed policy (now deemed unlawful by the Congress for police departments receiving federal funds) that required polygraphing complainants and suspects as a condition of investigating rape reports. Kanin's department only declared a complaint false when the victim recanted and admitted it was. In his published journal article, Kanin (1994) admitted that A possible objection to these recantations concerns their validity .rather than proceed with the real charge of rape, the argument goes, these women withdrew their accusations to avoid the trauma of police investigation.. And indeed, the Kanin study has been criticized for the department's use of polygraph testing in every case , a process that has been rejected by many police departments because of its intimidating impact on victims. 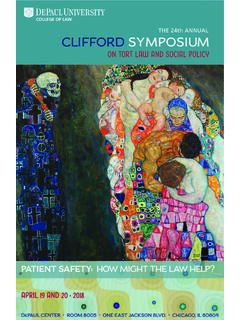 THE CLIFFORD SYMPOSIUM ON TORT LAW AND SOCIAL POLICY In 1994, Robert A. Clifford (’76) endowed a faculty chair in tort law and social policy. The chair gives meaningful expression to his belief that the civil justice system serves a number of vital interests in American society. 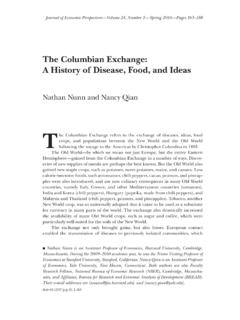 The Columbian Exchange: A History of Disease, Food, and … 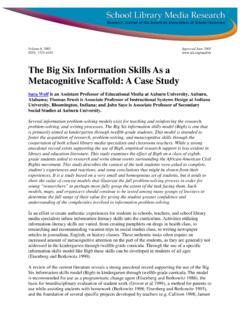 The Big Six Information Skills As a Metacognitive Scaffold ...

A number of research studies have been conducted with regard to metacognition. For example, McGregor (1993) examined the thinking processes that students engaged in while writing 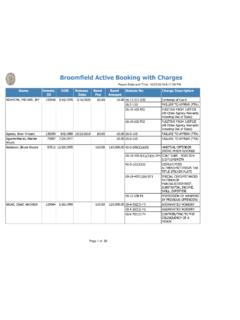