The Economics of Pre and Post-Independence …

The Economics of Pre and Post-Independence african economy and the Possibilities of Mainstreaming Meles's Developmental State Ideologies Samuel Kidane is a lecturer of History in Aksum University. He can be reached through While dealing with the historiography of Post-Independence african economy , the writer has made attempts to consult sources of different interests. Majority of the sources consulted for this purpose are books written by Marxist scholars. Thence, they reflect the maxims of socialism at continental and state level in Africa. Their explanations rest on the cardinal causes for the underdevelopment of Africa as a continent. The Economics of pre independence african economy The period before independence was a history of Africa's total dependency on the metropolitan nations. In this section of the paper the writer is especially interested to have an insight on the policies and praxes of colonial economy .

1 The Economics of Pre and Post-Independence African Economy and the Possibilities of Mainstreaming Meles’s Developmental State Ideologies Samuel Kidane is a lecturer of History in Aksum University.

1 The Economics of Pre and Post-Independence african economy and the Possibilities of Mainstreaming Meles's Developmental State Ideologies Samuel Kidane is a lecturer of History in Aksum University. He can be reached through While dealing with the historiography of Post-Independence african economy , the writer has made attempts to consult sources of different interests. Majority of the sources consulted for this purpose are books written by Marxist scholars. Thence, they reflect the maxims of socialism at continental and state level in Africa. Their explanations rest on the cardinal causes for the underdevelopment of Africa as a continent. The Economics of pre independence african economy The period before independence was a history of Africa's total dependency on the metropolitan nations. In this section of the paper the writer is especially interested to have an insight on the policies and praxes of colonial economy .

2 Likewise, Caroline Neale drawing on Andre Gunder Frank, a socialist scholar in similar with Batten put it, the effect of the colonial relationship is to widen the gap between the colonies and the metropolitan states. Wheither before, during, after or outside of a colonial relationship, investors generated wealth in Africa only ultimately to repatriate it, so that the dependent country is never given the means to control its own resources. The colony provided raw materials and labor. Frank further argued, colonial economy of Africa was highly characterized by the presence of an african Middle Man . 1. David Hap Good, a Marxist writer asserts, colonialism and colonial rulers, after all, prevented industrialization in Africa to preserve their industries from competition. He further argues, african economy before independence was highly characterized by external influences emerging from various sources.

3 Needless to mention that agriculture was/is the backbone of african economy both before and after independence . Likewise, agriculture during the period of the colonial administration was characterized by different features. According to Gromyko, colonialism in Africa had introduced alien variables to Agriculture apparently the introduction and expansion of tree plantation instead of crop cultivation and cash crop agriculture was the dominant feature. Andrew M. Kamarack on his part articulated that, the influence had caused a rift in the traditional lobby of the subsistence elements to african economy . Kamarack and Gromyko unanimously crowned it, pre- independence african agriculture irrespective of its indigenous economic elements was dominantly changed into either cocoa, tea, banana, rubber or cotton mono-crop agriculture. Furthermore, Bijorn Backman had it, colonial settlers sought to block the development of commercial agriculture, not just by ousting indigenous settlers from the land by forbidding the cultivation of certain commercial crops.

4 Meanwhile from the view point of another perspective, Melville J. Herskal asserts, in colonial economies with particular emphasis to agriculture, the influence of mercantilism persisted long after the philosophy had ceased to dominate economic policies. Thence, Marxist scholars in this regard argued that, the impact of colonial agriculture was the birth of mono-crop or cash-crop economy in pre- independence african economy . This is explicitly articulated by Kamarack, some crops are closely attached with the economy of nations in particular and regions in general at continental level. Accordingly, he noted that, as cocoa and palm-oil were to West Africa tea was to east Africa respectively. 2. Concurrently, Colin Legum, a liberal scholar asserts, the result of colonial rule on african agriculture was the creation of a mono-crop economy merely dependant on a single principal exportable crop.

5 Apparently, so was also true with the fate of the mining industry in pre- independence Africa. Although Africa is endowed with various precious minerals, however, it has benefited least out this. Manifold reasons are attributed to this. Consequently, a handful of scholars have viewed this from different perspectives. In this regard Gromyko asserts, Europe and its capitalist elites were the prime beneficiaries from these minerals. David Hap Good on his part viewed the natural endowment of minerals as the sources of Africa s economic impoverishments. According to him the minerals were the original sources of goods imported by Africa after being processed in Europe. The attachment of minerals with pre- independence african economy experiences a point of historical conjuncture between Marxist and liberal scholars analysis. Hence Colin Lagum, a liberal scholar, asserts, minerals had caused the emergence of mono-crop economy which was primarily dependant on the export of minerals.

6 Though his argument is somehow convincing, however, he refrained to substantiate his conclusion with a credible insight of economic critiques. The issue of trade and commercial relationship in pre- independence Africa is best depicted by different scholars in time and space. Apparently incognizant of the presence of variations at regional and national level, the general rubric of the period is presented as follows. For most Marxist scholars in the area, they are lenient to the generalization that, african countries before their independence do little commerce with one another. In addition productive units do not heavily depend on market or on sources of raw materials and its components from areas in Africa. In this regard, Basil Davidson, Kamarack and Nigussie unanimously argue, african 3. countries are more like islands lying off the coast of western Europe than like parts of a single continent.

7 Furthermore, Kamarack singularly quoted that, normally only around 8% of the trade of african countries was with other african countries. The prime cause of polarization in this regard was the analysis of Marxist historians on the root cause of the problems. Hence, taking colonialism as a system they assert, the cardinal factor for less commercial links between Africa countries was the deterioration of cottage industry and lack of inter clan bilateral commercial links. Nevertheless in antinomy with this Hap Good further put it, actions taken to weaken cottage industry were deliberately applied to deter industrialization in Africa. This was done to unleash European industries freely flourish as per se. However, it would be of dishonesty if mention is not made that, pre- independence african economy particularly the period after WWII, had witnessed improvements. According to Batten, the cause of growth was the shift from optimistic to pessimistic view of Africans over colonialism.

8 Rodney Walter crowned it, the cause of the improvement was an african factor. He asserts, WWII had brought salient scenario in which Europe needed Africa much more than Africa needed Europe. Generally speaking, as argued by Marxist and Liberal writers, the end result of colonial rule on african economy was the creation of mono-economic system leaving the colonies behind dependent on one principal agricultural or mineral export. However, it should not be by-passed that rural economy was highly neglected and industrial development remained rudimentary. 4. post - independence african economy Before one embarks on the venturesome task of trying to assess the Economics of post - independence african economy , it is worth to discuss on the interplay of politics and Economics . The 1960s was generally regarded as the decade of african independence or liberation. During this period most african countries (colonies) has matured into nationhood's.

9 L. Gray Cown and Basil argues, the leaders of independent Africa have unanimously asserted that, the political decolonization will remain meaningless unless it results a corresponding breakthrough in economic independence and a rise in the standard of living of the people. Furthermore, Melville an Africanist scholar in support to this idea asserts, political independence represented for colonial peoples a means of controlling their own resources and benefits that had previously gone to their rulers or the ex-metropolitans. Batten on his part noted that, the only road to permanent economic independence was based on real political independence . Marxist scholars argued, since 1960 african economy had been encountered with a stop page in the inflow of private capital and a sizable over all capital outflows. Therefore, it is evident that, as argued by Colin Legum too, this had affected the growth rate of african economy .

10 Hence of all other issues, however, what one should ask, like Cown does, economic decolonization is as important as political decolonization and is much more difficult to achieve. Moreover, how Africa was ready for changes particularly in the area of economy and leadership requires the formulation of pertinent economic policies and above all the coming to power of committed leadership. 5. Concurrently, Post-Independence african economy had faced numerous problems. Most if not all of the problems were emanating from the inheritance of colonial legacies and ill-organized national economic plans. However, this had remained the source of ferocious debate among scholars for several decades. Newly independent african countries in their attempt of counter balancing these problems had developed new economic plans. In the attempt of historicizing this phenomenon, liberal historians had defined Africa as a continent of plans.

Economic Development and Democracy in Ethiopia ...

Dec 06, 2016 · 1 Economic Development and Democracy in Ethiopia: Performances and Challenges 1By Teshome Adugna(PhD) December 6, 2016 1. Introduction There are various debates about the relationship between economic development and democracy 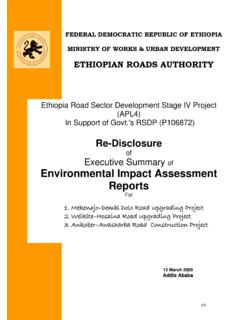 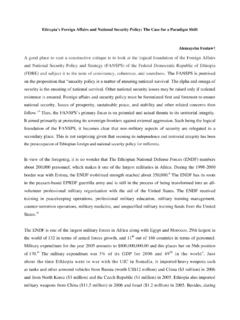 Nov 16, 2009 · Ethiopia’s Foreign Affairs and National Security Policy: The Case for a Paradigm Shift Alemayehu Fentaw† A good place to start a constructive critique is to look at the logical foundation of the Foreign Affairs 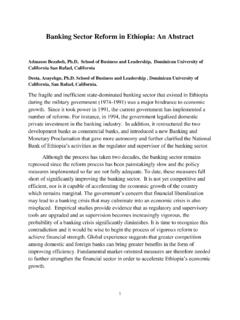 Jan 29, 2018 · H.E Ambassador Tsegaye Berhe addressed Ambassador’s Forum at Tel Aviv University On January 29, 2018 H.E Tsegay Berhe, Ambassador of the FDRE to the State of Israel addressed the Ambassadors’Forum at 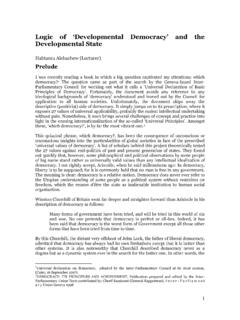 Logic of ‘Developmental Democracy’ and the …

1 Logic of ‘Developmental Democracy’ and the Developmental State Habtamu Alebachew (Lecturer) Prelude I was recently reading a book in which a big question captivated my attentions: which 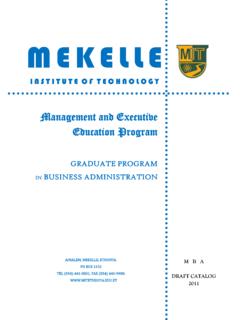 “The Developmental State and Federalism in …

1 “The Developmental State and Federalism in Ethiopia’’: Critique of Professor Clapham Habtamu Alebachew (Lecturer) Recently, I shared my brief outline of a monograph with colleagues and friends across

States, Developmental, Federalism, The developmental state and federalism in