5 Over the year, the number of long-term unemployed declined by 354,000. (See table A-12.). The labor force participation rate, at percent, was unchanged over the month and over the year. The EMPLOYMENT -population ratio was unchanged at percent in December but was up by percentage point over the year. (See table A-1.). The number of persons employed part time for economic reasons (sometimes referred to as involuntary part-time workers) was essentially unchanged at million in December but was down by 639,000 over the year. These individuals, who would have preferred full-time EMPLOYMENT , were working part time because their hours had been cut back or because they were unable to find a full-time job.

6 (See table A-8.). In December, million persons were marginally attached to the labor force, about unchanged from a year earlier. (The data are not seasonally adjusted.) These individuals were not in the labor force, wanted and were available for work, and had looked for a job sometime in the prior 12 months. They were not counted as unemployed because they had not searched for work in the 4 weeks preceding the survey. (See table A-16.). Among the marginally attached, there were 474,000 discouraged workers in December, little changed from a year earlier.

7 (The data are not seasonally adjusted.) Discouraged workers are persons not currently looking for work because they believe no jobs are available for them. The remaining million persons marginally attached to the labor force in December had not searched for work for reasons such as school attendance or family responsibilities. (See table A-16.). Establishment Survey Data Total nonfarm payroll EMPLOYMENT rose by 148,000 in December. Job gains occurred in health care, construction, and manufacturing. In 2017, payroll EMPLOYMENT growth totaled million, compared with a gain of million in 2016.

10 Within the industry, EMPLOYMENT in general merchandise stores declined by 27,000 over the month. Retail trade EMPLOYMENT edged down in 2017 (-67,000), after increasing by 203,000 in 2016. EMPLOYMENT in other major industries, including mining, wholesale trade, transportation and warehousing, information, financial activities, and government, changed little over the month. The average workweek for all employees on private nonfarm payrolls was unchanged at hours in December. In manufacturing, the workweek edged down by hour to hours, while overtime remained at hours. 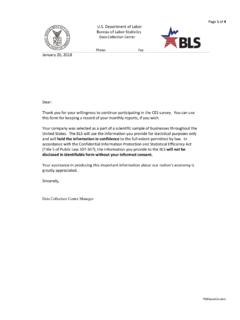 Page 1 of 4 790EbookCol.dotx U.S. Department of Labor . Bureau of Labor Statistics . Data Collection Center . Phone: Fax: January 20, 2018 . Dear: Thank you for your willingness to continue participating in the CES survey. 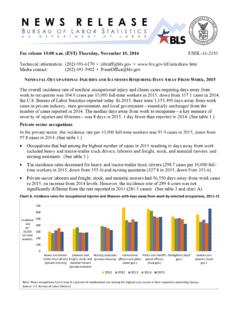 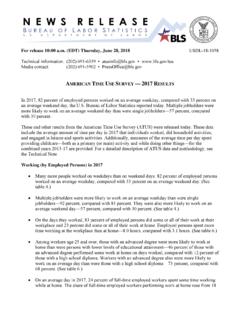 Technical Note . The estimates in this news release are based on annual average data from the American Time Use Survey (ATUS). The ATUS, which is conducted by the U.S. Census Bureau 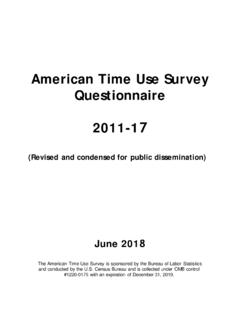 The American Time Use Survey (ATUS) is the first federally funded, continuous survey designed to measure time use in the United States. The …

Table A. Employment status of the civilian noninstitutional population by disability status and age, 2016 and 2017 annual averages [Numbers in thousands]

This document is available from www.hse.gov.uk/statistics/ Page 1 of 22 Health and Safety Executive Work-related Musculoskeletal Disorders

This document is available from www.hse.gov.uk/statistics/ Page 1 of 16 Health and Safety Executive Workplace fatal injuries in Great Britain 2018

Global burden of maternal sepsis in the year 2000 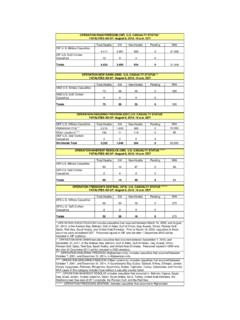