The Father Speaks to His Children

2 Everyone can help voluntarily to distribute this message. CONTENT. PREFACE ..3. SHORT BIOGRAPHY OF MOTHER EUGENIA ELISABETTA TESTIMONY OF THE RIGHT REVEREND A. CAILLOT, ..5. CONCLUSIONS ..10. THE Father S PART 1 ..11. TO THE POPE ..19. TO THE THE Father S PART 2 ..23. PRAYER OF MOTHER Front cover: Authentic photograph of the picture painted at Mother Eugenia's request after the Page 2 of 35. Mother Eugenia E. Ravasio: The Father Speaks to his Children . PREFACE. "GOD IS MY Father ". God is my Father ! This cry is being heard ever more frequently in today's world: people are coming to recognize that God is indeed their Father . Consequently, we feel it our duty to publish a message, given to the world by God the Father through one of His creatures who loved Him so much, Sister Eugenia Elisabetta Ravasio, and recognized as valid by the Church. We consider it appropriate to introduce this work by quoting the testimony of a former Bishop of Grenoble, the Right Reverend Alexandre Caillot.

3 In 1935 he set up a board of experts, drawn from various parts of France, to conduct a diocesan enquiry, which lasted ten years. Its members included the Bishop of Grenoble's Vicar General, Mgr Guerry, theologian;. the Jesuit brothers, Fathers Albert and Auguste Valencin-Amons, who ranked among the foremost authorities in the field of philosophy and theology and were expert in evaluating such cases; and two doctors of medicine, one of whom was a psychiatrist. We are sure that this message will help people to understand the deep tenderness the Father has for each one of us, and we hope that it will receive the widest possible circulation. Father Andrea D'Ascanio OFM Cap. Page 3 of 35. Mother Eugenia E. Ravasio: The Father Speaks to his Children . SHORT BIOGRAPHY OF MOTHER EUGENIA ELISABETTA RAVASIO. Who is Mother Eugenia, whom God the Father called My beloved daughter , My little plant ? In our opinion, Mother Eugenia is one of the greatest lights of our times, the little prophet of a new Church, in which the Father is the centre and apex of all mankind, and in which unity is the highest ideal of spirituality.

4 She is a light given by the Father to the world at this time of chaos and darkness, so that we may see the road that has to be followed. She was born in San Gervasio d'Adda (now Capriato San Gervasio), a small town in the province of Bergamo, Italy, on 4 September 1907, in a family of peasant background. She received only an elementary education. After a few years working in a factory, she entered the Congregation of Our Lady of the Apostles at the age of 20 years. It was here that her great charismatic personality developed, leading to her election as Mother General of the Congregation at the age of only 25. Quite apart from her spiritual qualities, her work in the social field alone would suffice to ensure her a place in history. In twelve years of missionary activity she opened over 70. centres - each with infirmary, school and church - in the remotest spots of Africa, Asia and Europe. It was she who discovered the first medicine for the cure of leprosy, extracting it from the seed of a tropical plant.

5 This medicine was later studied and developed further at the Pasteur Institute in Paris. She encouraged the apostolate of Raoul Follereau, who, following in her footsteps and building on the foundations laid by her, is regarded as the apostle of the lepers. During the period 1939-41 she conceived, planned and brought to fruition the project for a Lepers' City at Azopte (Ivory Coast). This was a vast centre, covering an area of 200,000. , for the care of leprosy remains even today one of Africa's and the world's leading centres of its kind. In recognition of this achievement, France conferred the Couronne Civique, the highest national honour for social work, on the Congregation of Missionary Sisters of Our Lady of the Apostles, of which Mother Eugenia was Superior General from 1935 to 1947. Mother Eugenia returned to the Father on 10 August 1990. Her most important legacy to us is the Message of the Father ( The Father Speaks to His Children ), the only private revelation made personally by God the Father and recognized as authentic by the Church after ten years of the most rigorous examination.

6 We reproduce at the beginning of the text the statement issued by Mgr Alexandre Caillot, Bishop of Grenoble, following the investigation. It is noteworthy that the Father (in 1932) dictated the Message to Mother Eugenia in Latin, a language totally unknown to her. In 1981 this Message came to our notice, and in 1982, its fiftieth anniversary, we published it in Italian. The many miracles of grace worked by the Message have led us to disseminate it gratis, especially in prisons, barracks and hospitals. In addition to English, it is available in French, Italian, Spanish and German and other languages Father Andrea D'Ascanio OFM Cap. Page 4 of 35. Mother Eugenia E. Ravasio: The Father Speaks to his Children . TESTIMONY OF THE RIGHT REVEREND A. CAILLOT, BISHOP OF GRENOBLE, FOLLOWING THE REPORT. PREPARED DURING THE CANONICAL ENQUIRY. INTO THE CASE OF MOTHER EUGENIA. Ten years have passed since, as Bishop of Grenoble, I decided to open an enquiry into Mother Eugenia's case. I now have enough information to bring my testimony as Bishop before the Church.

7 1. The first thing to emerge with certainty from the enquiry is that Mother Eugenia's considerable virtues are well established. From the beginning of her religious life, the sister had attracted her superiors' attention because of her piety, her obedience and her humility. Her superiors, perplexed by the extraordinary nature of the events which occurred during her novitiate, had not wanted to let her stay on in the convent. After some hesitation, they were forced to abandon their plan when faced with the nun's exemplary conduct. During the enquiry, Sister Eugenia showed great pa-tience and the utmost docility in submitting without complaint to all the medical tests, answering the theological and medical commissions' often long and distressing questioning, and accepting contradictions and trials. Her simplicity, in particular, was praised by all the investigators. A number of circumstances also showed the nun to be capable of practising virtue to a heroic degree. According to the theologians, an especially striking feature was her obedience during Father Auguste Valencin's enquiry in June 1934, and her humility on the sad day of 20 December 1934.

8 I can attest that, while she was Superior General, I found her very devoted to her duty, dedicating herself to her task - which must have seemed all the more difficult to her as she was not prepared for it - with great love for souls, her Congregation and the Church. Those close to her are struck, as I myself am, by her strength of spirit in facing difficulties. I am impressed not only by her virtues but also by the qualities she displays in exercising her authority. Also striking is the fact that a relatively uneducated nun should come to fill her Congregation's highest office. In this there is already something extraordinary and, from this point of view, the enquiry conducted by my Vicar General, Mgr Guerry, on the day of her election, is very significant. The answers given by the Chapter members and by the superiors and delegates of the various missions showed that they were choosing Mother Eugenia as their Superior General - in spite of her youth and the canonical obstacles which would normally have caused the idea of her nomination to be rejected - because of her qualities of judgment, balanced temperament, energy and firmness.

9 Reality would seem to have far surpassed the hopes that her electors placed in her. What I especially noticed in her was her lucid, lively and penetrating intelligence. I said that her education had been inadequate, but this was for external reasons over which she had no control: her mother's long illness had compelled her, at a very early age, to look after the house and be absent from school very often. Then, before she entered the convent, there were the hard years she worked in industry as a weaver. Notwithstanding these basic gaps, the consequences of which are evidenced in her style and spelling, Mother Eugenia gives many lectures in her community. It is worth noting that she herself compiles her Congregation's circulars and the contracts with municipal authorities or administrative councils regarding the hospital institutes of Our Lady of the Apostles. She has also compiled a long directory. She sees every situation clearly and correctly, as if it were a matter of conscience.

10 Her instructions are straight-forward, precise and very practical. She knows each of her 1400. Page 5 of 35. Mother Eugenia E. Ravasio: The Father Speaks to his Children . daughters personally, and also their attitudes and their virtues; hence she is able to select those who are most qualified to perform various tasks. She also has an accurate personal knowledge of her Congregation's needs and resources. She knows the situation in every house and has visited all her missions. We wish to emphasize also her spirit of far-sightedness. She has taken all the necessary measures for every hospital or school to have qualified nuns and whatever they need to live and develop. I find it particularly interesting to note that Mother Eugenia seems to possess a spirit of decisiveness, a sense of reality and a creative will. In six years she has founded 67. institutes and has been able to introduce very useful improvements in her Congregation. If I single out her qualities of intelligence, judgment and will, and her powers of administration, it is because they seem to me to rule out definitively all the hypotheses about hallucinations, illusions, spiritism, hysteria or delirium. 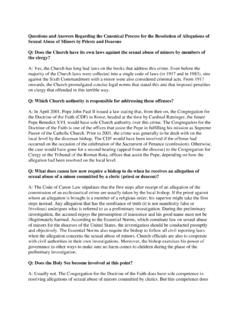 Questions and Answers Regarding the Canonical …

Questions and Answers Regarding the Canonical Process for the Resolution of Allegations of Sexual Abuse of Minors by Priests and Deacons Q: Does the Church have its own laws against the sexual abuse of minors by members of 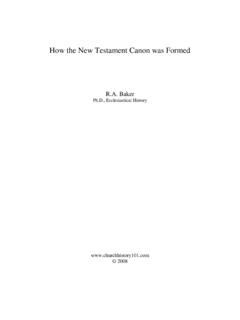 How the New Testament Canon was Formed - …

2 Introduction “How was the New Testament formed?” This is the most commonly asked question directed at me when I speak on university campuses. Jesus and the Gnostic Gospels - CTSFW

Kloha: Jesus and the Gnostic Gospels 125 founder or leader. One can read about Valentinians, Marcionites, followers of Basilides, Nicolatians, and, on occasion, Gnostics.