To Balun, or not to Balun…. (that is the question) •Varney initially recommended using a Balun –In 1984 he retracted that after doing further measurements. •He found / read with highly reactive Z’s: –SWR above 2:1 the losses increase and cores will saturate – losing RF power to heat. •Design Note: only use core based baluns in ...

4 SWR greater than , on most transceivers, causes the PA to start cutting back, so that the final devices are spared possible high voltages developed by the reactive impedances. All situations require an external ATU if multi-banding typically handle up to 10:1 SWR Feed Z at System input Make up Section Band Z (nominal) SWR (75 ohm) 80 ( ) 31 +j 50 40 ( ) 60 - j110 20 123 j7 15 86 +j376 10 409 j 917 To balun , or not to (that is the question) Varney initially recommended using a balun In 1984 he retracted that after doing further measurements. He found / read with highly reactive Z s: SWR above 2:1 the losses increase and cores will saturate losing RF power to heat. Design Note: only use core based baluns in matched conditions . Handle reactance on the load side of the balun Jerry Sevick/Walt Maxwell Also measured balanced currents in the feed coax. (His particular situation) To balun , or not to Consensis is to use a choke at the owl / coax transition point to avoid common mode currents Types suggested Air Wound Badger (W6TC) Coaxial Choke (HR 2/1980) K9YC stacked core chokes / ref NCJ W2DU Maxwell bead choke Note: Coiled coax chokes (10 turns on a #10) will not have the frequency range needed 80M thru 10 M Additional bands?

7 Jones Antenna Handbook -- 1937 It s well worth spending 10c on the Antenna , when you re spending $1 on the radio. The average amateur has simply got to fit his Antenna into his space. makes the best Antenna within your space? Parting Words Maybe it s the G5RV G5RV Antenna Analysis The truth, the whole truth and nothing but the truth, so help me, Louis Varney. The End Rick Hiller w5rh 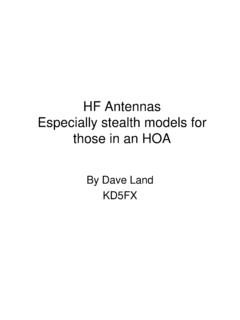 HF Antennas Especially stealth models for those in an HOA 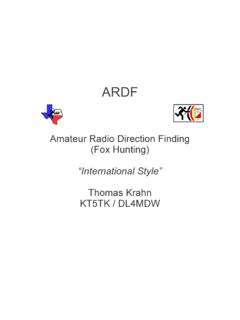 ARDF International Rules Find 5 hidden transmitters by using a portable receiver with a directional antenna The foxes must be found before a maximum time limit. Ranking: 1.) Number of foxes in time limit. 2.) Time at finish line The transmitters are under time control. Each TX sends for one minute its ID, then the next fox is switched on. 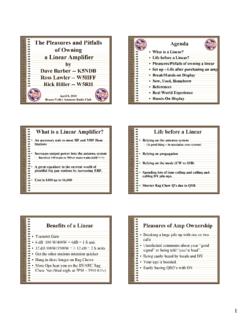 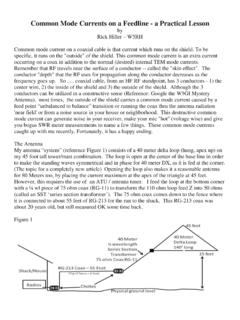 Common Mode Currents on a Feedline - a Practical Lesson

Common Mode Currents on a Feedline - a Practical Lesson by Rick Hiller – W5RH Common mode current on a coaxial cable is that current which runs on the shield. 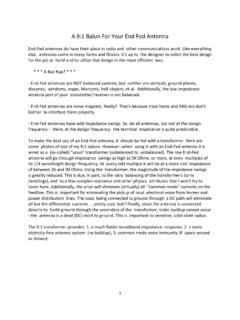 A 9:1 Balun For Your End Fed Antenna - Mobileers

Jan 09, 2013 · 1 A 9:1 Balun For Your End Fed Antenna End-Fed antennas do have their place in radio and other communications work. Like everything else, antennas come in many forms and flavors. It's up to the designer to select the best design for the job at hand and to utilize that design in the most efficient way. ...

How to Feed an End Fed Wire? The Balun or in this case the Unun The end fed wire regardless of its length presents a high impedance to the feedline. If the intention is to build a ½ wave mono band antenna then it is necessary to attach a 48:1 unun at …

2. At the end that will connect to the Balun, pass approximately 1-1/2 foot through holes at one end of an insulator and tie with a couple throws of a knot. Strip off about 1/4” of insulation and then Crimp and then solder one of the crimp terminals on the free end. This will connect to the RED terminal output of your Balun. 3.

Your, Resonant, Balun, For end fed resonant, Your balun