THE gathas , OUR GUIDE . the thought-provoking divine songs of Zarathushtra translated by Ali A. Jafarey USHTA PUBLICATION. First Edition: June 1989. Copyright by Ali A. Jafarey. All rights reserved. Published by: Ushta Inc. Box 2160. Cypress, CA 90630- Printed in the United States of America Digital format reproduced with permission. yoi zarazd o a hen Mazd i To those who are devoted to the Wise One. (Song ). Contents Contents ..i The gathas , Our GUIDE , an Salutation By An Unknown Avestan Poet ..13. The gathas - The Thought-provoking Divine Songs of Zarathushtra Ashen Vohu, The Main Motto .. 15. Ahuna Vairya The Principle Of Choice .. 16. Song 1: Humbly I Pray .. 17. Song 2: The Choice Of Asho Zarathushtra .. 19. Song 3: Good And 21. Song 4: Guidance .. 23. Song 5: Aberration.

THE GATHAS, OUR GUIDE the thought-provoking divine songs of Zarathushtra translated by Ali A. Jafarey USHTA PUBLICATION

Guide, Our guide, The gathas, Gathas

1 THE gathas , OUR GUIDE . the thought-provoking divine songs of Zarathushtra translated by Ali A. Jafarey USHTA PUBLICATION. First Edition: June 1989. Copyright by Ali A. Jafarey. All rights reserved. Published by: Ushta Inc. Box 2160. Cypress, CA 90630- Printed in the United States of America Digital format reproduced with permission. yoi zarazd o a hen Mazd i To those who are devoted to the Wise One. (Song ). Contents Contents ..i The gathas , Our GUIDE , an Salutation By An Unknown Avestan Poet ..13. The gathas - The Thought-provoking Divine Songs of Zarathushtra Ashen Vohu, The Main Motto .. 15. Ahuna Vairya The Principle Of Choice .. 16. Song 1: Humbly I Pray .. 17. Song 2: The Choice Of Asho Zarathushtra .. 19. Song 3: Good And 21. Song 4: Guidance .. 23. Song 5: Aberration.

3 77. Yasna Equivalents .. 77. Bibliography ..78. ii Preface The 26th Karachi Sea Scouts Troop, first of its kind in the Indian subcontinent, was established in 1937. It drew its members from various high schools of the city of Karachi, now in Pakistan. The original core consisted of twelve specially chosen Christian, Hindu, Muslim, Parsi, and Sikh Boy Scouts. I. was one of them. It was led by two British and one Indian officer. The troop had a beautiful harmonious brotherhood. We used to meet at a then vacant point on China Creek, inside Karachi harbor, for swimming and boating and at another point on West Wharf, further out, for sailing. By the end of the year, our number swelled to sixteen. Although of heterogeneous cultures, we soon became very friendly. However, there happened to be a zealous missionary among the newcomers.

4 He would argue with others on religious matters, even with the Hindus of other denominations. And on one fine summer morning, well before the class began, he took the Parsis by surprise by picking at the Zarathushtrian religion. When I realized that they were not prepared to defend themselves, I, prompted by my Iranian zeal, went forward. I hardly knew anything about Good Conscience, the good religion of Zarathushtra , except what I had heard from my parents about old Iran and its religion, and that in the past all our ancestors were Zarathushtrians. My mother used to recite and simplify stories from the Shahnameh of Ferdowsi. Incidently, in those days my hometown Kerman, Iran, was the second city with the largest pocket of Iranian Zarathushtrians, and both my parents had Zarathushtrian friends.

5 My father used to frequent a famous Dorabji's business office in Bazaar- e Vakil in Kerman and talk with the Parsis there. It seems that I put up a good defense, especially in favor of reverence to fire, because my Parsi colleagues appreciated it. On the following Sunday, Eruch P. Bulsara, one of the Parsis, gave me a copy of the gathas as a token of his appreciation. It had the text in Devanagri script, and was translated by the late Jotindramohan Chatterji in Sanskrit, English, and Gujarati. I was simply fascinated, rather captivated by the sublime songs. I wanted to learn the language. Eruch introduced me to the late Dr. Maneck B. Pithawalla, the then Principle of Parsi High School. He taught me Avesta, Pahlavi, and fundamentals of the religion, and then gladly encouraged me to hold an Avesta-Pahlavi class at the school with a dozen of Parsi boys and girls of my own age.

6 He also introduced me to Dasturji Dr. Maneckji N. Dhalla, the enlightened and broadminded sage of a scholar, for further studies. The entire period taken by the two teachers exceeded six years. I. feel heavily indebted to Eruch and my two teachers for their guidance to the gathas . 1. Dasturji affectionately advised me on the very first day I faced him, more or less, in these words: When you think you have learned enough of the Avesta language, do not start with translating the gathas first. They are the GUIDE . A. wrong interpretation would mislead the people. Engage yourself first with other parts of the Avesta. Wait for five years before you embark on translating the gathas . I made him a promise. Although the gathas have become my only thought-provoking GUIDE during the last fifty years, I have never forgotten my promise to the sage.

7 My Gatha translation in Persian was published in 1981 over forty years from the day I. made the promise, and seven times the time proposed by my teacher. This English rendering began as monthly lessons of the Gatha classes held at the California Zoroastrian Center, Westminster since October 1986. It is a revised edition of my Persian translation, Stot Yasn, g th -ye asho zartosht-e espantam n, va sorudh -ye v baste be- n, b goz resh-e f rsi-ye rav n, . (Staota Yesnya, the gathas of Zarathushtra Spitama and the songs supplemented to them, with the text and commentary in fluent Persian), Tehran, Iran, 1981. It, therefore, includes the texts and translations of all the Avestan pieces in the Gathic dialect. This constitutes what the Sassanian collection put in their foremost nask (one of the twenty-one volumes of the canonized scriptures), and called it Stot Yasn (Avestan Staota Yesnya, reverential praises).

8 And, above all, I am pleased and proud too that after the nask's apparent loss, rather submergence in the extant Yasna, I am the first to put it back in a independent print, first in Persian and now in English. The promise, always lingering in my mind, has made me to think that a good, standard translation of the gathas can only be presented by a team of experts, both Zarathushtrian scholars who regard them as their holiest of the holies and non-Zarathushtrian academicians of Gathic and relevant studies. I proposed it at the Second World Zoroastrian Congress, held in Bombay in 1964. I read a paper at the Third Congress, also held in Bombay in 1977. I have talked about it to many a listening ears and nodding heads. But to this day, I have not seen a single step taken by any Zarathushtrian organization toward it.

9 Meanwhile, various scholars, each on his or her own, are coming forward with their renderings in English, French, German, Gujarati, Persian, and other tongues. There is no doubt that these renderings differ from one another. It makes the reader a little confused, and robs him or her of some of his or her faith in the words meant to inspire one to soaring heights of enlightenment. But, let me make it clear that this is always the case with individual translations, be it the renderings of a religious scripture or a poetic work. Even the much standardized Bible has its different versions. I have, like many other translators, consoled myself by consulting other translations also to come to a better conclusion. I have had the translations, commentaries, and notes by B. T. Anklesaria, Mobed Firuz Azargoshasb (Persian), Ch.

10 Bartholomae, F. A. Bode and P. Nanavutty, J. Chatterji, J. Duschesn-Guilleman, K. S. Guthrie, S. Insler, K. E. Kanga (Gujarati), D. J. Irani, 2. A. F. Khabardar, L. Mills, Ebrahim Pour-e Davoud (Persian), Kh. E. Punegar, Abbas Shoustari-Mehrin (Persian), I. J. S. Taraporewalla, and the Pahlavi translation and its Sanskrit rendering. To each of these persons (living or not). and works I express my deep gratitude. My own method has been to track, trace, find, and weigh all Gathic words, terms and ideas some controversial in the extant Avestan and Pahlavi writings to understand their true meanings and values. I have kept in view the relevant Vedic literature, the rich Persian literature, and the richer Iranian lore. I. have made every possible use of my linguistic, prosodic, and anthropological abilities for the task.

Classes, Textbook, Textbooks for classes i 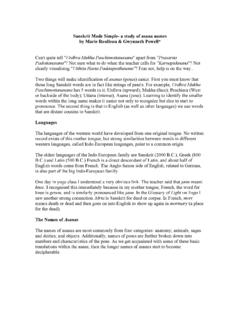 Sanskrit Made Simple- a study of asana names - …

Study, Simple, Made, Sanskrit, Sanskrit made simple a study

Volume, Lesson, Volume i lessons 1 to