The Gospel According to Mark - Richard S Cohen

The Gospel According to Mark New Revised Standard Version Chapter 1 12 And the Spirit immediately drove him out into the wilderness. 13 He was in the 1 The beginning of the good news of wilderness forty days, tempted by Satan;. Jesus Christ, the Son of God. and he was with the wild beasts; and the angels waited on him. 2 As it is written in the prophet Isaiah, 14 Now after John was arrested, Jesus See, I am sending my messenger ahead came to Galilee, proclaiming the good of you, news of God, 15 and saying, The time is who will prepare your way; fulfilled, and the kingdom of God has 3 the voice of one crying out in the come near; repent, and believe in the wilderness: good news.. Prepare the way of the Lord, make his paths straight,' 16 As Jesus passed along the Sea of 4 John the baptizer appeared in the Galilee, he saw Simon and his brother wilderness, proclaiming a baptism of Andrew casting a net into the sea for repentance for the forgiveness of sins.

The Gospel According to Mark New Revised Standard Version Chapter 1 1 The beginning of the good news of Jesus Christ, the Son of God. 2 …

According, Gospel, Marks, The gospel according to mark

1 The Gospel According to Mark New Revised Standard Version Chapter 1 12 And the Spirit immediately drove him out into the wilderness. 13 He was in the 1 The beginning of the good news of wilderness forty days, tempted by Satan;. Jesus Christ, the Son of God. and he was with the wild beasts; and the angels waited on him. 2 As it is written in the prophet Isaiah, 14 Now after John was arrested, Jesus See, I am sending my messenger ahead came to Galilee, proclaiming the good of you, news of God, 15 and saying, The time is who will prepare your way; fulfilled, and the kingdom of God has 3 the voice of one crying out in the come near; repent, and believe in the wilderness: good news.. Prepare the way of the Lord, make his paths straight,' 16 As Jesus passed along the Sea of 4 John the baptizer appeared in the Galilee, he saw Simon and his brother wilderness, proclaiming a baptism of Andrew casting a net into the sea for repentance for the forgiveness of sins.

2 5 they were fishermen. 17 And Jesus said to And people from the whole Judean them, Follow me and I will make you countryside and all the people of fish for people. 18 And immediately Jerusalem were going out to him, and they left their nets and followed him. 19. were baptized by him in the river Jordan, As he went a little farther, he saw James confessing their sins. 6 Now John was son of Zebedee and his brother John, who clothed with camel's hair, with a leather were in their boat mending the nets. 20. belt around his waist, and he ate locusts Immediately he called them; and they left and wild honey. 7 He proclaimed, The their father Zebedee in the boat with the one who is more powerful than I is hired men, and followed him.

3 Coming after me; I am not worthy to stoop down and untie the thong of his 21 They went to Capernaum; and when sandals. 8 I have baptized you with the sabbath came, he entered the water; but he will baptize you with the synagogue and taught. 22 They were Holy Spirit. astounded at his teaching, for he taught them as one having authority, and not as 9 In those days Jesus came from Nazareth the scribes. 23 Just then there was in their of Galilee and was baptized by John in synagogue a man with an unclean spirit, the Jordan. 10 And just as he was coming 24 and he cried out, What have you to up out of the water, he saw the heavens do with us, Jesus of Nazareth? Have you torn apart and the Spirit descending like come to destroy us?

4 I know who you are, a dove on him. 11 And a voice came from the Holy One of God. 25 But Jesus heaven, You are my Son, the Beloved; rebuked him, saying, Be silent, and with you I am well pleased. come out of him! 26 And the unclean spirit, convulsing him and crying with a loud voice, came out of him. 27 They were all amazed, and they kept on asking one another, What is this? A new 13 Jesus went out again beside the sea;. teaching with authority! He commands the whole crowd gathered around him, even the unclean spirits, and they obey and he taught them. 14 As he was him. 28 At once his fame began to walking along, he saw Levi son of spread throughout the surrounding Alphaeus sitting at the tax booth, and he region of Galilee.

5 Said to him, Follow me. And he got up and followed him. Chapter 2. 15 And as he sat at dinner in Levi's 1 When he returned to Capernaum after house, many tax collectors and sinners some days, it was reported that he was at were also sitting with Jesus and his home. 2 So many gathered around that disciples for there were many who there was no longer room for them, not followed him. 16 When the scribes of the even in front of the door; and he was Pharisees saw that he was eating with speaking the word to them. 3 Then some sinners and tax collectors, they said to his people came, bringing to him a paralyzed disciples, Why does he eat with tax man, carried by four of them. 4 And collectors and sinners? 17 When Jesus when they could not bring him to Jesus heard this, he said to them, Those who because of the crowd, they removed the are well have no need of a physician, but roof above him; and after having dug those who are sick; I have come to call through it, they let down the mat on not the righteous but sinners.

6 Which the paralytic lay. 5 When Jesus saw their faith, he said to the paralytic, Son, 18 Now John's disciples and the your sins are forgiven. 6 Now some of Pharisees were fasting; and people came the scribes were sitting there, questioning and said to him, Why do John's in their hearts, 7 Why does this fellow disciples and the disciples of the speak in this way? It is blasphemy! Who Pharisees fast, but your disciples do not can forgive sins but God alone? 8 At fast? 19 Jesus said to them, The once Jesus perceived in his spirit that wedding guests cannot fast while the they were discussing these questions bridegroom is with them, can they? As among themselves; and he said to them, long as they have the bridegroom with Why do you raise such questions in them, they cannot fast.

7 20 The days will your hearts? 9 Which is easier, to say to come when the bridegroom is taken away the paralytic, Your sins are forgiven,' or from them, and then they will fast on that to say, Stand up and take your mat and day. walk'? 10 But so that you may know that the Son of Man has authority on earth to 21 No one sews a piece of unshrunk forgive sins he said to the paralytic cloth on an old cloak; otherwise, the 11 I say to you, stand up, take your mat patch pulls away from it, the new from and go to your home. 12 And he stood the old, and a worse tear is made. 22 And up, and immediately took the mat and no one puts new wine into old wineskins;. went out before all of them; so that they otherwise, the wine will burst the skins, were all amazed and glorified God, and the wine is lost, and so are the skins.

8 Saying, We have never seen anything but one puts new wine into fresh like this! wineskins.. proclaim the message there also; for that 23 One sabbath he was going through the is what I came out to do. 39 And he grainfields; and as they made their way went throughout Galilee, proclaiming the his disciples began to pluck heads of message in their synagogues and casting grain. 24 The Pharisees said to him, out demons. Look, why are they doing what is not lawful on the sabbath? 25 And he said to 40 A leper came to him begging him, and them, Have you never read what David kneeling he said to him, If you choose, did when he and his companions were you can make me clean. 41 Moved with hungry and in need of food? 26 He pity, Jesus stretched out his hand and entered the house of God, when Abiathar touched him, and said to him, I do was high priest, and ate the bread of the choose.

9 Be made clean! 42 Immediately Presence, which it is not lawful for any the leprosy left him, and he was made but the priests to eat, and he gave some clean. 43 After sternly warning him he to his companions. 27 Then he said to sent him away at once, 44 saying to him, them, The sabbath was made for See that you say nothing to anyone; but humankind, and not humankind for the go, show yourself to the priest, and offer sabbath; 28 so the Son of Man is lord even for your cleansing what Moses of the sabbath. commanded, as a testimony to them. 45. But he went out and began to proclaim it 29 As soon as they left the synagogue, freely, and to spread the word, so that they entered the house of Simon and Jesus could no longer go into a town Andrew, with James and John.

10 30 Now openly, but stayed out in the country; and Simon's mother-in-law was in bed with a people came to him from every quarter. fever, and they told him about her at once. 31 He came and took her by the Chapter 3. hand and lifted her up. Then the fever left her, and she began to serve them. 1 Again he entered the synagogue, and a man was there who had a withered hand. 32 That evening, at sunset, they brought 2 They watched him to see whether he to him all who were sick or possessed would cure him on the sabbath, so that with demons. 33 And the whole city was they might accuse him. 3 And he said to gathered around the door. 34 And he the man who had the withered hand, cured many who were sick with various Come forward. 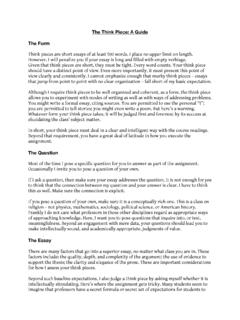 The Think Piece: A Guide The Form - Richard S Cohen

The Think Piece: A Guide The Form Think pieces are short essays of at least 500 words. I place no upper limit on length. However, I will penalize you if your essay is long and filled with empty verbiage.

Guide, Essays, Think, Pieces, The think piece, A guide the 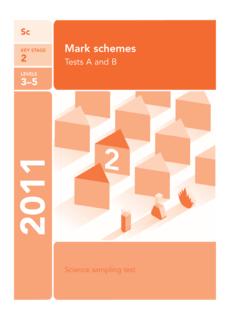 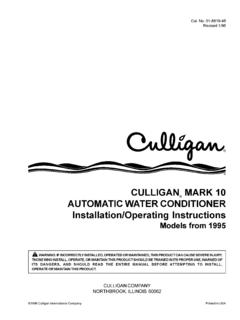 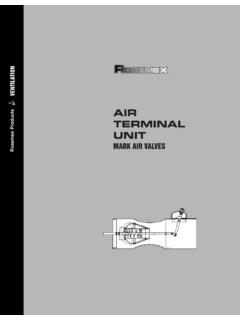 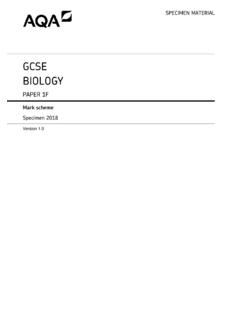 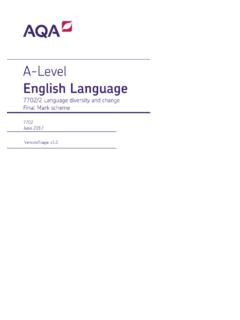 It must be stressed that a mark scheme is a working document, in many cases further developed and expanded on the basis of students’ reactions to a particular paper.