THE GROUNDING OF POWER SYSTEMS ABOVE …

THE GROUNDING OF POWER SYSTEMS ABOVE 600 VOLTS: A PRACTICAL VIEW POINT. Copyright Material IEEE. Paper No. PCIC-2002-xx John P. Nelson Fellow, IEEE. NEI Electric POWER Engineering, Inc Box 1265. Arvada, CO, 80001. USA. Abstract - This paper discusses GROUNDING practices used one to ten volts per kilometer. [3] These voltage gradients on electric distribution SYSTEMS ABOVE 600 Volts. In have occurred since the origin of the earth and will continue particular, the paper concentrates on the three-phase four- to occur in the future. Man and animals have lived with wire, multi-grounded neutral system that is extensively used these stray voltages and associated stray currents with no in North America. The paper addresses the benefits of the apparent adverse reactions. And, if found that there were multi-grounded POWER system and makes comparisons with hazards associated with them, there is little that can be done other GROUNDING system designs including ungrounded; about stopping it at its source, the sun.

System, Power, Grounding, Above, The grounding of power systems above

1 THE GROUNDING OF POWER SYSTEMS ABOVE 600 VOLTS: A PRACTICAL VIEW POINT. Copyright Material IEEE. Paper No. PCIC-2002-xx John P. Nelson Fellow, IEEE. NEI Electric POWER Engineering, Inc Box 1265. Arvada, CO, 80001. USA. Abstract - This paper discusses GROUNDING practices used one to ten volts per kilometer. [3] These voltage gradients on electric distribution SYSTEMS ABOVE 600 Volts. In have occurred since the origin of the earth and will continue particular, the paper concentrates on the three-phase four- to occur in the future. Man and animals have lived with wire, multi-grounded neutral system that is extensively used these stray voltages and associated stray currents with no in North America. The paper addresses the benefits of the apparent adverse reactions. And, if found that there were multi-grounded POWER system and makes comparisons with hazards associated with them, there is little that can be done other GROUNDING system designs including ungrounded; about stopping it at its source, the sun.

2 Therefore, we live three-wire single-point grounded; three-phase, four-wire in a world where stray voltages and stray currents are single point grounded neutral; and the three-phase, five-wire natural. SYSTEMS . Advantages and disadvantages of each system Next, there are many hazards associated with the will be discussed. Some criticism regarding stray currents generation, transmission and distribution of electricity. The and stray voltages has been made of the multi-grounded following is a list of a few of those hazards: neutrals on electric distribution SYSTEMS and this will be Contact with energized parts discussed. Technical responses will be made to these Electrical arc flashes comments including a discussion on reasonable solutions, Auto accidents involving POWER poles alternative designs, and acceptable risks. Drowning in water associated with hydroelectric plants. Index Terms Acceptable risk, multi-grounded system , Illness and deaths from the gases emitted from resistance GROUNDING , reactance GROUNDING , single point coal and oil fired generation plants.

3 Grounded SYSTEMS , solidly grounded SYSTEMS , stray current Auto accidents involving trains transporting coal to and stray voltage. electric generating stations. The risks associated with these hazards are minimized I. INTRODUCTION with good, sound engineering, construction and maintenance practices. The benefits of safely using The three-phase, four-wire, multi-grounded distribution electricity far out weigh the risks involved in the generation, system has been selected by most utilities in North America transmission and distribution of electricity. Rather than as the medium voltage distribution system of choice even outlawing the use of electricity due to its inherent hazards, though many utilities started with a three-wire, ungrounded engineering standards and designs have been developed to delta system . The reasons for the development of the three- minimize the hazards and to mitigate the problems to a level phase, four-wire, multi-grounded SYSTEMS involve a of acceptable risk.

4 Combination of safety and economic considerations. The three-phase, four-wire multi-grounded design has been II. ACCEPTABLE RISKS. successfully used for many years and is well documented in the standards including the National Electrical Safety Code (NESC) [1], and the National Electrical Code (NEC) [2]. To explain the term acceptable risk, let us consider a Have there been problems associated with this system ? common every day risk. Each year, over 50,000 lives are Yes. Are there reasonable solutions available to minimize lost due to automobile accidents in the United States. these problems? Absolutely! Should the use of the multi- Throughout the world, that figure is most likely many times grounded system be eliminated? This paper will show that that number, but few people would agree saving those the answer to the last question is absolutely not. 50,000 lives is worth the outlawing of the automobile. The earth is an electro-magnetic circuit with north and Statistically speaking, every person in the United States has south magnetic poles and with an ionosphere made up with approximately a one in 5,000 chance of dying in an charged particles.

5 During electromagnetic storms caused automobile accident in any given year. We consider that by sunspot activity, observations have been made showing probability an acceptable risk.. potential gradients (stray voltages) on the earth's surface of Another similar statistic is that in 2001, 491 people Fig 2 is different from Figure 1 in that the system neutral across the United States died in train-vehicle collisions [4]. is grounded only at one point. The ground connection would Many more were injured at rail crossings. Using similar typically be located in the distribution substation. statistical calculations, on the average, a person has a one Fig 3 shows the connections for a solidly grounded, in 500,000 chance of being killed in a car-train collision. The reactance grounded and resistance grounded three-phase, number of rail deaths could be drastically reduced if not three-wire system . eliminated by eliminating railroad crossings.

6 This could be Fig 4 shows a three-wire ungrounded delta system and accomplished by constructing expensive overpasses at Fig 5 shows a three-wire ungrounded-wye system . For each rail crossing. Safety crossings can be installed at personnel and equipment safety, neither of these two approximately $180,000 each and bridges at $4 million. In SYSTEMS is currently recommended for modern day SYSTEMS . Colorado alone, there exist 1,368 rail crossings that are not Some still exist, but very few are presently designed and equipped with any type of warning device [5]. The cost to constructed as an ungrounded system . implement better safety measures for those 1,368 rail A. crossings is estimated to be $246 million to place warning signals at each of those crossings or $ billion to place B. bridges at all of those crossings. And, Colorado only accounts for 1% of the fatalities in the United States [4]. N. While 19 fatalities occurred in Colorado from 1999 to present, Texas was No.

7 1 in the nation with 161 deaths and C. California had 122 recorded fatalities. While those numbers a) Solidly Grounded of fatalities are alarming, they show that there are risks to people and we accept those risks in our every day life. A. There are many other examples of similar risks including being struck by lightning, being involved in an airplane crash B. and many others. The chances of being injured or killed in XR. such an accident in any given year is part of life, will never N. be totally eliminated and is considered an acceptable risk.. C. III. system GROUNDING b) Reactance Grounded system neutral GROUNDING of a distribution system takes FIGURE 1. on one of several forms: Four-wire multi-grounded neutral system (Solid and Solidly Grounded Reactance Grounded). Reactance Grounded Resistance Grounded The differences between the multi-grounded SYSTEMS in Fig Ungrounded 1 and the single point grounded SYSTEMS shown in Fig 2.

8 While there is always an exception, for all practical may appear insignificant, but the differences are significant purposes, a neutral conductor is not required for the as will be explained in more detail later. But suffice to say at resistance grounded or ungrounded system due to the fact this point, the differences involve both safety and that no neutral current is expected to flow. Therefore, only economics. limited discussion of those two SYSTEMS will be included. That leaves the solidly grounded and reactance grounded A. SYSTEMS that will be discussed in greater detail in this paper. The latter two SYSTEMS can have a single point grounded or B. multi-grounded neutral. In general, the SYSTEMS shown in Figs 1-5 are the options available for use. N. Fig 1 depicts the multi-grounded neutral system for the solidly grounded and reactance grounded SYSTEMS C. commonly used by the electric utilities in North America. a) Solidly Grounded The neutral GROUNDING reactor is used by some utilities to reduce the available ground fault current while at the same A.

9 Time still maintaining an effectively grounded system . The NESC provides a definition for an effectively grounded B. system : An effectively grounded system is intentionally XR. connected to earth through a ground connection or N. connections of sufficiently low impedance and having sufficient current carrying capacity to limit the buildup of C. voltages to levels below that which may result in undue b) Reactance Grounded hazard to persons or to connected equipment. [1] There are other, more technical issues of an effectively grounded FIGURE 2. system which will be discussed later in this paper. Four-wire single point grounded-neutral system (Solid and Reactance Grounded). The three-phase, three-wire SYSTEMS shown in Fig 3 are IV. SAFETY AND CODE CONSIDERATIONS. commonly used in an industrial POWER system . Industrial POWER SYSTEMS typically have a large number of three-phase The multi-grounded system is referenced in both the motors and have no need for neutral connected loads.

10 NESC and the NEC. The NEC requires single point Therefore, the industrial users will usually dispense with the GROUNDING on low voltage SYSTEMS , 600 Volts and below. need for the fourth-wire neutral. However, the NEC allows the use of a multi-grounded system for voltages ABOVE 600 Volts. On the other hand, A the NESC is quite specific that a three-phase, four-wire system must have a multi-grounded neutral. Otherwise, the B required clearances may need to be increased to that of an ungrounded system . Furthermore, a single point grounded neutral can no longer be considered effectively grounded, C can have a substantial voltage present and may need to be isolated by using additional clearances. a) Solidly Grounded A Code and safety considerations include: B A. NESC Section : Multi-Grounded SYSTEMS : XR. The neutral, which shall be of sufficient size and Ampacity for the duty involved, shall be connected to a C made or existing electrode at each transformer location and b) Reactance Grounded at a sufficient number of additional points with made or existing electrodes to total not less than four grounds in A each km (1 mile) of the entire line, not including grounds at individual services.

SOME LESSONS LEARNED FROM …

2 For any given job, the equipment supplier, a separate testing group, the receiving organization, the design engineer, and/or end customer may provide start-up services. 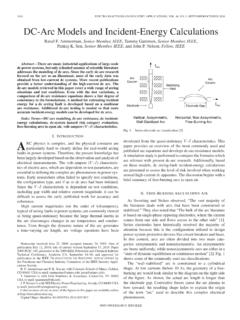 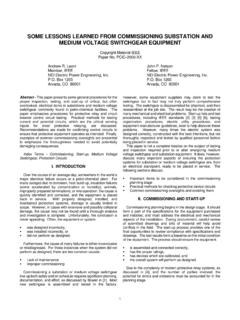 SOME LESSONS LEARNED FROM …

2 For any given job, the equipment supplier, a separate testing group, the receiving organization, the design engineer, and/or end customer may provide start-up services. 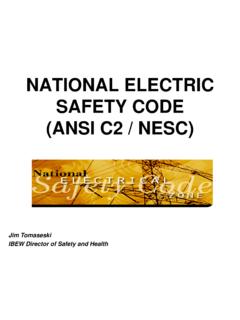 CUSP Base Exams and T&D Endorsement Exam Sample Questions and Format OPERATIONS 17. Where will specific safety procedures for completion of a … 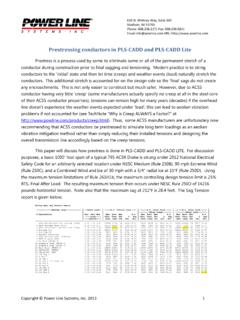 Prestressing conductors in PLS-CADD and PLS …