6 2. Definitions.- (1) In these rules, unless the context otherwise requires,- (i) ―Act‖ means the Himachal Pradesh Panchayati Raj Act,

3 39 Process for Budget preparation by Panchayats. 40. Guidelines for approval of budget. 41. Supply of copies of approved budget. 42. Re-appropriation of funds. 43. Budget head for expenditure. CHAPTER-VI. EXPENDITURE. 44. Payment. 3. 45. Liability not to be incurred without budget provisions. 46. Control over expenditure. 47. Voucher. 48. Presentation of claims. 49. Pay order. 50. Acknowledgement of payment. 51. Classification of bills and vouchers. 52. Establishment bills. 53. Arrears to be drawn on a separate bill . 54. Fixed travelling and conveyance allowance. 55. Deduction from pay. 56. Acknowledgement of pay. 57. Last pay certificate. 58. Establishment bill check register. 59. Travelling and daily allowances bills. 60. Travelling allowance bill check register. 61. Other payments. CHAPTER-VII. HONORARIUM AND OTHER ALLOWANCES TO THE. OFFICE BEARERS OF PANCHAYAT. 62. Honorarium. 63. Travelling and daily allowances to the office bearers of Panchayat. 64. Certificate. 65. Submission and verification of travelling and daily allowances bill.

4 CHAPTER-VIII. STORES. 66. Stores. 67. Purchases. 68. Forms and registers. 69. Receipt of stores. 70. Issue of stores. 71. Storage. 72. Accounts of stores. 73. Physical verification. 4. CHAPTER-IX. DEFALCATION AND LOSSES AND ABANDONMENT. OF CLAIMS. 74. Responsibility for loss sustained through fraud etc. 75. Report of an enquiry into losses. 76. Recovery of over-payments. 77. Write off and disposal of stores and other losses. 78. Grant of remission of revenue to lessees and contractors. CHAPTER-X. AUDIT AND INSPECTION. 79. Audit of Panchayats. 80. Procedure for conduct of audit. 81. Submission of audit reports. 82. Re-audit. 83. Compliance report. 84. Report of the fraud or embezzlement, etc. 85. Settlement of audit objections. 86. Progress report of pending objections. 87. Publication of report of pending paras. 88. Utilisation certificates. 89. Maintenance of records of audit reports. 90. Inspection and access to Panchayat records etc. 91. Scope of inspection and access to Panchayat records etc.

8 (vii) Assistant Engineer means the Assistant Engineers of the PANCHAYATI Raj/Rural Development Department or appointed by the Panchayat under section 135 or deputed by the State Government under section 136, as the case may be;. (viii) Auditor(s) means the Auditors, District Audit Officers and Deputy Controller of the PANCHAYATI Raj Department and shall also include any other private agencies/persons authorised by the Director, under section 118 of the Act;. (ix) book transfer denotes the process whereby financial transactions, which do not involve the giving or receiving of cash or of stock materials, are brought to account. Such transactions usually represent liabilities and assets brought to account either by way of settlement or otherwise but they may also represent corrections and amendments made in cash, stock or book transfer, transactions previously taken to account;. (x) cash includes legal tender, coin, currency and bank notes, cheques payable on demand, Government drafts and demand drafts and also revenue stamps but does not include Government securities, deposit/ receipt of banks, debentures and bonds accepted as security deposit.

9 7. (xi) competent authority means an authority, as specified in Appendix A or B or C , as the case may be, to these rules, with whose sanction/approval a particular function is to be performed under these rules;. (xii) contract means any kind of undertaking written or verbal, express or implied, by a person, not being a Government servant, or by a syndicate or firm for the construction, maintenance or repair of one or more works for the supply of materials, or for the performance of any service in connection with the execution of works or the supply of materials;. (xiii) contractor means a person, syndicate or firm borne on the approved list of contractors of the State Government ;. (xiv) day means a calendar day beginning and ending at midnight;. (xv) District Panchayat Officer means an Officer, by whatever name called, appointed by the Government to perform the functions of the District Panchayat Officer ;. (xvi) dues means any amount recoverable under the Act including penalty and fines except in criminal cases. 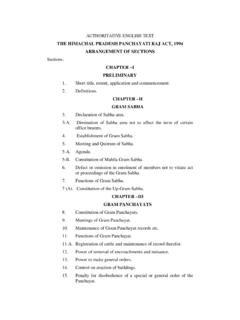 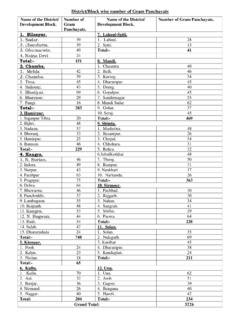 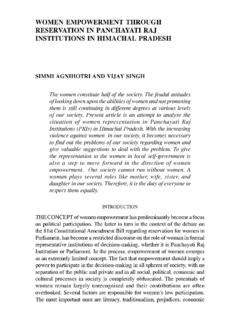 WOMEN EMPOWERMENT THROUGH RESERVATION IN PANCHAYATI RAJ INSTITUTIONS IN HIMACHAL PRADESH SIMMI AGNIHOTRI AND VIJAY SINGH The women constitute half of the society.