THE IMPACT OF PERCEPTIONS OF LEADERSHIP …

113 the impact of perceptions of leadership style, use of power, and conflict management style on organizational outcomes virginia p. richmond john p .

2 John P. Wagner received his in Speech Communication from West Virginia University in August 1980. Two of the major concerns of most organizations Student, 1968; for conflict, see Deutsch, 1973;. in contemporary society are productivity and Katz & Kahn, 1966; Serelson & Steiner, 1964). employee satisfaction. In profit-making organiza- tions, productivity is directly related to the achieve- Theoretical Orientation ment of the primary goal of the organization- increasing the profit margin. In non-profit organiza- A mediational model of the relationship between tions increased productivity can lead to increased the behaviors of supervisors and the productivity service. Employee satisfaction, although frequently and satisfaction of subordinates was employed in not directly related to productivity, is tied to turnover the current investigation. The components of that rates and absenteeism which are major financial model include the supervisor's intent, the supervi- drains on profit and non-profit organizations alike.

3 Sor's behavior, the subordinates' PERCEPTIONS of the Literally thousands of studies have been reported supervisor's behavior, and the resulting satisfaction which have sought to link a wide variety of variables and productivity of the subordinate. with productivity and / or satisfaction. A substantial This perspective views subordinates' percep- number of these studies have examined the role of tions as the primary precursors of their productivity communication in increasing productivity and satis- and satisfaction. One, but only one, of the elements faction. A general conclusion that may be drawn impacting those PERCEPTIONS is the behavior of the from this research is that communication between superior. Many other factors, most of which are not supervisor and subordinates does have an impor- under the direct control of the supervisor, also tant IMPACT . However, the way (s) that IMPACT is IMPACT subordinate PERCEPTIONS . Working condi- achieved remains the concern of contemporary tions, the work task, the personality of the subordi- research.

4 Nate, and family and community concerns are a few The three concerns of the present investigation of the other important elements which IMPACT subor- are LEADERSHIP style, use of power , and management dinate PERCEPTIONS . of conflict. All three are tied directly to communi- Training of supervisors usually focuses on alter- cation between supervisor and subordinates. All ing the way they see their organizational role (their three have been found in previous research to be intent) and modifying their behavior. Often, the related to productivity and / or employee satisfac- model employed is highly instrumental-injecting tion (for LEADERSHIP , see McGregor, 1960; Likert, certain new behaviors or removing certain old 1961; Tannenbaum & Schmidt, 1958; Fiedler, 1965; behaviors is assumed to modify subordinates' per- for power , see Pelz, 1952; Thibaut & Riecken, 1955; ceptions and result in increased productivity and / or COMMUNICATION QUARTERLY, Vol. 31, , Winter 1983 27. Because of the conditions imposed upon this Measures research by the managers of the organizations In order to probe the research questions outlined studied, we were unable to obtain data related to above, measures of LEADERSHIP style, use of power , employee productivity.)

5 Consequently, the outcome conflict management style, satisfaction with super- variable studied were all in the general area of vision, satisfaction with work, solidarity with super- employee satisfaction. Specifically, these included visor, and anxiety about communicating with super- subordinate satisfaction with supervision, subordi- visor were employed. Subordinates completed all of nate satisfaction with work, subordinate percep- the measures, supervisors only the first three. Each tions of solidarity (closeness) with their supervisor, measure is discussed below. and subordinate PERCEPTIONS of their anxiety about LEADERSHIP Style. LEADERSHIP style was opera- communicating with their supervisor. tionalized and measured by the scale developed by The first three research questions bearing on Richmond and McCroskey (1979). This instrument outcome variables were directed toward testing the places LEADERSHIP style on a 19-point continuum assumption underlying our theoretical model as out- ranging from Tell through Sell and Consult to Join, lined above.

6 These questions were: with five points separating each of the four classifi- O. To what extent are superior and subordinate cation points. This instrument is based on the earlier work of Tannenbaum and Schmidt (1958) and PERCEPTIONS colinear predictors of out- comes? Sadler ( 1970) and has been found to have satisfac- tory reliability (test-retest r = .85) in previous 05 To what extent are superior PERCEPTIONS inde- pendent predictors of outcomes? research. In the present investigation, since the measure is a single scale and was administered 06 To what extent are subordinate PERCEPTIONS independent predictors of outcomes? only once, it was not possible to estimate the scales'reliability. The final research question was directed towards Use of power . The five bases of power concep- discrepant supervisor / subordinate PERCEPTIONS . tualized by French and Raven ( 1959) were investi- The concern was with the potential IMPACT on out- gated in this study. The measures employed were come variables of such discrepant PERCEPTIONS .

7 Those advanced by Richmond, McCroskey, Davis, Since subordinate PERCEPTIONS can be either higher and Koontz (1980). This measure is based on the or lower than those of superiors, both positive and earlier work of Student (1968) which found the negative PERCEPTIONS are of concern. The final bases of power to be related to both productivity research question, therefore, was: and satisfaction. Student (1968) employed only a 07 To what extent are positive and negative single scale for each power base. Richmond, et. aI., discrepancies between superior and subordi- expanded the measure to five items for each power nate PERCEPTIONS predictive of outcomes? base in order to enhance reliability. In that research the reliability estimate for each power base exceeded .90. Similar high reliability estimates Method were obtained in the present investigation (see Table 1). Sample Conflict management Style. A survey of the litera- The sample for this investigation included 96 tum uncovered no measure of conflict management units in five service-oriented, publicly-supported style deemed appropriate for this investigation.

8 Organizations. Participation in the research was Consequently, it was necessary to create such an completely voluntary and anonymity was assured. A instrument. Based upon earlier work of Sillars total of 87 supervisors and 432subordinates partic- ( 1979) a 20-item instrument representing 20 conflict ipated. Data obtained for supervisors or subordi- management strategies was generated. The instru- nates for which no counterpart data were available ment was administered in a 5-point, Likert-type are not reflected in these figures and were not response format. included in any data analyses. Factor analysis of the data from the subordinates To insure anonymity each supervisor was in this study indicated that the scale was not unidi- assigned a random code number. The supervisor mensional. Oblique rotation analysis indicated two informed her/his subordinates of that code number correlated factors. The first factor, labeled "activi- for use in their completion of the research instru- ty," included 11 items and the second factor, ments.

9 Instruments were distributed to each unit labeled "dominance," included four items. Five personally. Because of requests by some unit items loaded on neither factor and no other factor supervisors, some units completed the i{1struments included more than one item. Thus only the data for at special meetings with the researcher present. the items on the two factors were included in subse- Subjects in most units completed the instruments on quent analyses. Although the sample of supervisors their own time and returned them to the researcher was not of sufficient size (n = 87) for factor analytic by mail. Reports of aggregate data were made to purposes, a factor analysis was conducted on these each of the five organizations as a condition of their data and the two rotated factors were essentially cooperation in the research. None of the organiza- the same as those obtained for the subordinate tions had a financial involvement in the project. sample. The estimated reliabilities for both of the COMMUNICATION QUARTERLY WINTER 1983 29.}

10 Dimension scores were satisfactory for a new scale to reduce the amount of communication sought by (see Table 1), but additional items probably should the subordinate as well as the effectiveness of that be added to the dominance measure in future use to in which actually engaged (McCroskey, 1977). increase the reliability of that measure. Reduced anxiety, therefore, is seen as a positive Satisfaction with Supervision and Work. The Job influence toward superior-subordinate communica- Descriptive Index (JDI), developed by Smith, Ken- tion. dall, and Hulin (1969) was employed to measure Anxiety about communicating with one's supervi- subordinate satisfaction. Only the supervision and sor was operationalized and measured by the Spiel- work dimensions were employed, since these have berger ( 1966) State Anxiety Inventory as modified been found in previous research to be sensitive to for use with communication anxiety by Richmond the types of PERCEPTIONS studied in this investigation ( 1978). 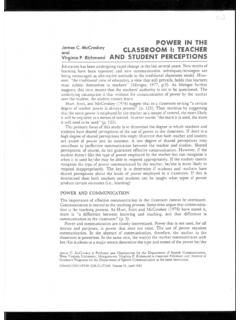 li~ James C. McCroskey and Virginia P. Richmond POWER IN THE CLASSROOM I: TEACHER AND STUDENT PERCEPTIONS Education has been undergoing rapid change in the last several years. 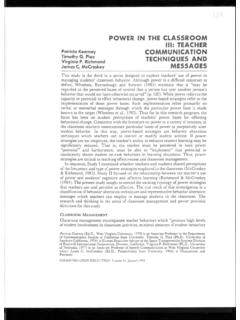 I~i Patricia Kearney Timothy G. Plax Virginia P. Richmond James C. McCroskey POWER IN THE CLASSROOM III: TEACHER COMMUNICA TION TECHNIQUES AND MESSAGES This study is the third in a series designed to explore teachers' use of power in

The Influence of Ethnocentrism in Organizational … 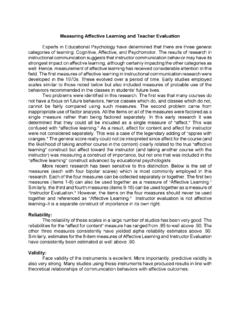 Measuring Affective Learning and Teacher Evaluation Experts in Educational Psychology have determined that there are three general categories of learning: Cognitive, Affective, and Psychomotor. 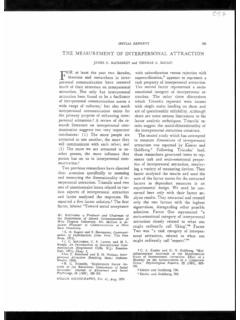 262 SPEECH MONOGRAPHS The interpretation of these (actor analytic results is difficult since several items load strongly on both factors, and the authors failed to … 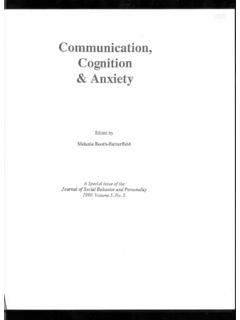 150 Communication, Cognition & Anxiety Edited by Melanie Booth-Butterfield A Special issue of the J oumal of Social Behavior and Personality 1990, VolumeS, No. 2 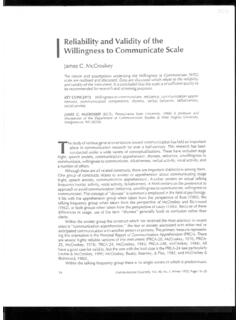 Reliability and Valid~ty of I Willingness to Communicate Scale 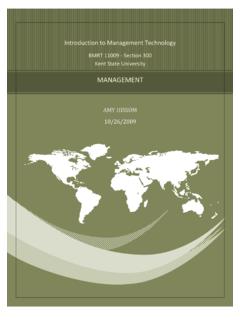 3 INTRODUCTION The purpose of this paper is to give a basic understanding of managers and managing. It is a compilation of resources that explain what management is, the different levels of management,