The Lives of Ancient Celtic Women Celtic Women were distinct in the Ancient world for the liberty and rights they enjoyed and the position they held in society. Compared to their counterparts in Greek, Roman, and other Ancient societies, they were allowed much freedom of activity and protection under the law. The Iron Age Celts were nevertheless a patriarchal people and for the most part men had the ultimate power in politics and the home. Despite this, Ancient Celtic Women remain an inspiring example of womanhood from the past. Classical authors' impressions tell a great deal about how different Celtic Women were from the Women with whom those writers were familiar.

The Lives of Ancient Celtic Women Celtic women were distinct in the ancient world for the liberty and rights they enjoyed and the position they held in society.

1 The Lives of Ancient Celtic Women Celtic Women were distinct in the Ancient world for the liberty and rights they enjoyed and the position they held in society. Compared to their counterparts in Greek, Roman, and other Ancient societies, they were allowed much freedom of activity and protection under the law. The Iron Age Celts were nevertheless a patriarchal people and for the most part men had the ultimate power in politics and the home. Despite this, Ancient Celtic Women remain an inspiring example of womanhood from the past. Classical authors' impressions tell a great deal about how different Celtic Women were from the Women with whom those writers were familiar.

2 Diodorus of Sicily describes Gaulish Women as being nearly as tall as the men, whom they rival in courage . Ammianus Marcellinus gives a more animated description: a whole band of foreigners will be unable to cope with one [Gaul] in a fight, if he calls in his wife, stronger than he by far and with flashing eyes; least of all when she swells her neck and gnashes her teeth, and poising her huge white arms, begins to rain blows mingled with kicks, like shots discharged by the twisted cords of a catapult . While overstated, the words of Marcellinus conjure images of formidable Women among the Ancient Celts.

3 Warrior- Women and Queens Ancient Celtic Women served as both warriors and rulers. Girls as well as boys could be trained to fight with swords and other weapons. One of the most prominent training schools in Gaelic mythology was run by Scathach (pronounced sca-hah or skya ), a woman warrior from what is now Scotland. She trained the greatest hero of Irish legend, C chulainn (pronounced koo-hull-in or koo-khull-in , with the KH as in Scottish loch). This most famous of her pupils went on to fight entire armies alone and perform other great deeds. Scathach's female rival, Aife (or Aoife), was considered one of the fiercest warriors alive.

4 Both of these Women led armies. The practice of bearing arms was relatively common among Women . Women were recorded as having taken part in the final battle against Caius Suetonius Paulinus when he advanced upon the druid stronghold on the island of Mona (now Anglesey) in present-day Wales. In this case, they seem to have made great use of psychological tactics such as screeching, dancing wildly, and pulling at their faces, frightening the Romans enough to hold them off for a time. Although the highest political authority was often vested in males, Women occasionally became ruling queens and military leaders.

5 Boudicca (or Boadicea) was the best known woman of this class. She is honored to the present for leading the last major revolt against the Romans in Britain. When her husband Prasutagus died, she became ruler of the Iceni, a Celtic tribe in southeastern Britain. Prasutagus had established diplomatic relations with the Romans following their invasion of the island. He decided to submit to Roman suzerainty, and in his will he left a large portion of his holdings to the Romans but named his two teenage daughters as his heirs. Boudicca was designated as the regent until they should come of age.

6 The Romans did not take female rulers seriously and sought to take advantage of what they considered to be the weakness of the Iceni at this time. Catus Decianus, the Roman in charge of collecting Rome's share of the inheritance, insulted the Iceni through a series of horrific acts. He ordered his troops to loot their property, flog Boudicca in public, and rape her daughters repeatedly. Boudicca responded by leading a revolt of her people's forces and those of several other tribes that had grown resentful of the invading Romans. The rebels leveled the Roman administrative center of Londinium (modern-day London) and sacked two other Roman towns before being defeated.

7 Boudicca's ability to unite her people in revolt was remarkable considering the destabilizing Celtic penchant for individual glory, a consistent precipitating factor in the fall of Celtic Europe to Roman expansion. Despite the unifying force of Boudicca's leadership, the revolt was short-lived, and Boudicca herself died at its end, perhaps by her own hand in order to avoid capture. Queen Cartimandua was another notable female Iron Age Celtic leader. She ruled the Brigantes, a tribe of northern Britain. A contemporary of Boudicca, Cartimandua is remembered more as a traitor than a heroine for her betrayal of Caradoc, the leader of the Celtic resistance in the West.

8 When Caradoc came to her for help, Cartimandua seized him and subsequently handed him over, in chains, to the Romans. She likely did this for reasons of political expediency, attempting to maintain power through the backing of Rome. In Ireland, a well-known Ancient female ruler was Medb (or Maeve), Queen of Connaught. She is best remembered for her role in the legendary Cattle Raid of Cooley. Medb, determined to prove herself her husband's equal, lead a raid into the kingdom of Ulster for the purpose of attaining a bull of the same value as her husband's prize animal. Although she captured the bull, she was eventually thwarted by C chulainn and the animal escaped.

9 Medb may prove a hateful figure in this legend, but she provides an example from the Iron Age of a potent Celtic woman ruler. Her authority was absolute and her word was rule, prevailing even over that of her husband. Women 's Roles in Public Life Though public life among the Iron Age Celts was largely the domain of men, Women managed to play a prominent role as well. They seem not to have been systematically excluded from any occupation. Women could become druids, including priestesses, poets, and healers. They could conduct business without the consent or involvement of their husbands.

10 They could serve as diplomats; in fact, a woman acted as ambassador in establishing the treaty between the Carthaginian general Hannibal and the Celtic ruler Volcae during a march against Rome. Plutarch wrote in the second century that there was a long-standing tradition among the Celts of Women acting as mediators or judges in political and military disputes. They were also known to have played a similar mediating role in their own tribal assemblies. Marriage and Women 's Rights under Law Women 's personal rights and their rights within marriage further testify to the high regard in which they were held in Iron Age Celtic societies. 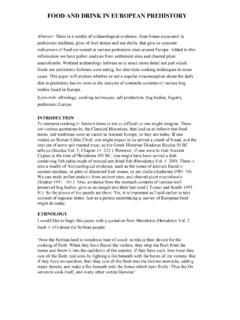 FOOD AND DRINK IN EUROPEAN PREHISTORY

FOOD AND DRINK IN EUROPEAN PREHISTORY Abstract: There is a wealth of archaeological evidence, from bones excavated in prehistoric middens, piles of fruit stones and sea shells, that give us concrete indications of food consumed at various prehistoric sites around Europe.

AND DRINK IN EUROPEAN PREHISTORY