The Machine That Changed The World

Machine_that_Changed_Book summary The Machine that Changed The World James , Daniel , Daniel Roos Introduction This classic book explains the evolution of lean manufacturing practices in the automobile industry. As the authors put it, the off repeated statement that the World faces a massive overcapacity crisis in automobile production is a misnomer. The reality is that the World has an acute shortage of competitive lean-production capacity and a vast glut of uncompetitive mass-production capacity. The automobile industry has come a long way since the days of craft production. The craft producer used highly skilled workers and simple but flexible tools to make exactly what the consumer asked for one item at a time.

Machine_that_Changed_Book summary The Machine That Changed The World

Machine, World, That, Changed, The machine that changed the world

1 Machine_that_Changed_Book summary The Machine that Changed The World James , Daniel , Daniel Roos Introduction This classic book explains the evolution of lean manufacturing practices in the automobile industry. As the authors put it, the off repeated statement that the World faces a massive overcapacity crisis in automobile production is a misnomer. The reality is that the World has an acute shortage of competitive lean-production capacity and a vast glut of uncompetitive mass-production capacity. The automobile industry has come a long way since the days of craft production. The craft producer used highly skilled workers and simple but flexible tools to make exactly what the consumer asked for one item at a time.

2 Goods produced by the craft method cost too much for people to afford. So mass production was developed at the beginning of the twentieth century as an alternative. Mass-producers began to use narrowly skilled professionals to design products made by unskilled or semiskilled workers tending expensive, single-purpose machines. These churned out standardized products in very high volume. The machinery was expensive and intolerant of disruption. So the mass-producer added many buffers - extra supplies, extra workers, and extra space to ensure smooth production. The consumer got a cheaper product but at the expense of variety. Moreover, most employees found work boring and dispiriting. Today, lean producers led by Toyota have emerged as global leaders.

3 The lean producer, combines the advantages of craft and mass production, while avoiding the high cost of the former and the rigidity of the latter. Lean producers employ teams of multi skilled workers at all levels of the organization and use highly flexible, increasingly automated machines to produce volumes of products in enormous variety. The most striking difference between mass production and lean production lies in their ultimate objectives. Mass-producers set a limited goal for themselves. This translates into an acceptable number of defects, a maximum acceptable level of inventories and a narrow range of standardized products. To do better, they argue, would cost too much or exceed inherent human capabilities.

4 Lean producers, set their sights explicitly on perfection: continually declining costs, zero defects, zero inventories, and endless product variety. No lean producer may have achieved perfection and none ever will. But the endless quest for perfection, on the part of lean producers, continues to generate surprising results. Henry Ford and the rise of Mass Production Craft production had the following characteristics: A work force that was highly skilled in design, Machine operations, and fitting. Organizations that were extremely decentralized, although concentrated within a single city. The use of general-purpose Machine tools to perform drilling, grinding, and other operations on metal wood. A very low production volume 1,000 or fewer automobiles a year, only a few of which were built to the same design.

5 It was Henry Ford who really understood the drawbacks of craft production. With his Model T, Ford achieved two objectives. He had a car that could be easily manufactured, and that was, also user-friendly. Almost anyone could drive and repair the car without a chauffeur or mechanic. The key to mass production was not the moving, or continuous, assembly line. Rather, it was the complete Page 1. Machine_that_Changed_Book summary and consistent interchangeability of parts and the simplicity of attaching them to each other. These were the manufacturing innovations that made the assembly line possible. Taken together, interchangeability, simplicity, and ease of attachment gave Ford tremendous advantages over his competition.

6 Besides cutting costs, he could also eliminate the skilled fitters who had always formed the bulk of every assembler 's labor force. The assemblers/fitters performed the same set of activities over and over at their stationary assembly stands. They had to get the necessary parts, file them down so they would fit and then bolt them in place. Ford made this process more efficient by delivering the parts to each work station. Now the assemblers could remain at the same spot all day. Then, around 1908, Ford finally achieved perfect part interchangeability. He decided that the assembler would perform only a single task and move from vehicle to vehicle around the assembly hall. By August 1913, just before the moving assembly line was introduced, the task cycle for the average Ford assembler had been reduced from 514 to minutes.

7 Ford soon recognized the problem with moving the worker from assembly stand to assembly stand. Walking took time and jam-ups frequently resulted as faster workers overtook the slower workers in front of them. In 1913, Ford introduced the moving assembly line, which brought the car part to the stationary worker. This innovation cut cycle time from minutes to minutes. Ford wanted to produce the entire car in one place and sell it to the whole World . But the shipping systems of the day were unable to transport huge volumes of finished automobiles economically without damaging them. There were also trade barriers. So Ford decided to design, engineer, and produce his parts centrally in Detroit. The cars, were assembled in remote locations.

8 By 1926, Ford automobiles were assembled in more than thirty-six cities in the United States and in nineteen foreign countries. But Ford quickly realised that one standard product just wasn 't suited to all World markets. For example, to Americans, Ford's Model T seemed like a small car, particularly after the East Texas oil discoveries pushed gasoline prices down and made longer travel by car economically feasible. However, in England and in other European countries, with their crowded cities and narrow roads, the Model T seemed much larger. In addition, when the Europeans failed to find any oil at home, they began to tax gasoline heavily in the 1920s to reduce imports. The Europeans soon began to clamor for a smaller car.

9 Moreover, massive direct investment in foreign countries created resentment of Ford 's dominance of local industry. In England, for example, where Ford had become the leading auto manufacturer by 1915, his pacifism in World War I was roundly denounced, and the company 's local English managers finally convinced Detroit to sell a large minority stake in the business to Englishmen to diffuse hostility. Ford encountered barriers in Germany and France as well after World War I, as tariffs were steadily raised on parts and complete vehicles. As a result, by the early 1930s, Ford had established three fully integrated manufacturing systems in England, Germany, and France. These companies offered customisd products to suit national tastes and were run by native managers who tried to maintain their autonomy.

10 Sloan's approach At General Motors, Alfred Sloan 's innovative thinking seemed to resolve the conflict between the need for standardization to cut manufacturing costs and the model diversity required by consumers. He achieved both goals by standardizing many mechanical items, such as pumps and generators, across the company 's entire product range and by producing these over many years with dedicated production tools. At the same time, he annually altered the external appearance of each car and introduced an endless series of hang-on features, such as automatic transmissions, air conditioning, and radios, which could be installed in existing body designs to sustain consumer interest. Ford's factory practices, combined Sloan 's marketing and management techniques, and organized labor 's new role in controlling job assignments and work tasks, took mass production to its final mature form. 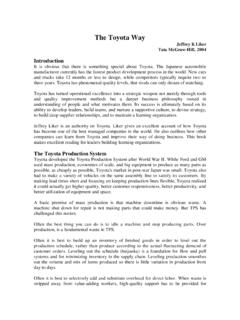 The Toyota Way Jeffrey K Liker Tata McGraw-Hill, 2004 Introduction It is obvious that there is something special about Toyota. The Japanese automobile Chapter - 1 Risk Management: An Introduction “A business has to try to minimise risks. But if its behaviour is governed by the ... While risk management is critical for financial institutions, corporates too are realizing the importance of risk management. Pitney Bowes, the postal machine maker is a good example. In recent years, this ...

The Toyota Way Jeffrey K Liker Tata McGraw-Hill, 2004 Introduction It is obvious that there is something special about Toyota. The Japanese automobile

The Strategic Implications of Enterprise Risk …