THE MEC: DEPARTMENT OF POLICE, ROADS AND …

the supreme court of appeal of south africa judgment case no: 483/2013 reportable in the matter between: the mec: department of police, roads and transport, appellant

2 Province refusing to pay the main contractor the balance basis for refusing to pay the balance was that the road Rehabilitation Programme was allegedly not budgeted for and that effecting payment in those circumstances would be in contravention of various statutory provisions defence held to be fallacious further defence of lack of privity of contract rejected as diversionary always contemplated that for the subcontractor to be paid, main contractor had to be paid first respondent claiming in the alternative that the amount owing to the main contractor be paid and that it in turn be ordered to pay sub-consultant no resistance to this by main contractor in circumstances it would be artificial and strained to not order direct payment.

3 _____. ORDER. _____. On appeal from: Free State Division of the High Court, Bloemfontein (Matlapeng AJ. sitting as court of first instance). The following order is made: 1. Save to the extent set out in paragraph 2 hereof, the appeal is dismissed with costs. 2. The order of the court below is altered by substituting the amount of R1 540 in paragraph 1 with the amount of R1 436 3. _____. JUDGMENT. _____. Navsa JA (Ponnan, Leach, Saldulker and Zondi JJA concurring): [1] This case is about a provincial government behaving unconscionably. As will become apparent, in its dealings culminating in the present appeal, the Free State Provincial Government conducted itself without any integrity and failed to be transparent and accountable as enjoined by our Constitution.

4 In short, after the Province had awarded a tender in relation to a road infrastructure programme and concluded a written agreement with the main contractor, the second respondent, to supply engineering services for a total remuneration package of R69 million and sanctioned the appointment of the first respondent as the subcontractor to provide environmental protection services for payment in an amount of R1 593 and after they had both completed the work and received some payment, the Province refused to pay the balance owing, on the spurious basis that the work had not been budgeted for. Notwithstanding that the Province had received the benefits of the labour of the two contractors, it contended that the failure to budget for the contemplated road works in the year in which the written agreement with the main contractor was concluded and in several budgetary periods thereafter amounted to contraventions of applicable regulatory statutory provisions and it was therefore entitled to refuse to be held to its obligations in terms of the concluded agreements.

5 Ironically, it relied on the principle of legality to avoid honouring agreements that it had authorised. It hardly requires any imagination to consider what members of the public would make of such behaviour. The detailed background and the reasons for the conclusions reached in the first two sentences of this paragraph are set out hereafter. [2] During 2009/2010 the Free State Provincial Government, represented in the present litigation by the appellant , the Member of the Executive Council: Free State Provincial Government: DEPARTMENT of police , ROADS and transport (the MEC), 4. embarked on a road infrastructure programme, the purpose of which was to promote accessibility, mobility and a safe road infrastructure network in the Province that would be environmentally sensitive and would stimulate socio-economic growth.

6 The programme encompassed 23 ROADS located throughout the Province. In accordance with its own procurement policy and the applicable regulatory statutory provisions, the Free State DEPARTMENT of police , ROADS and transport (the DEPARTMENT ) called for tenders to be submitted to it for the provision of, amongst others, engineering related services. The second respondent, SSI/Tshepega Joint Venture (SSI), submitted a tender and subsequently, on 19 April 2010, the DEPARTMENT concluded a written agreement in terms of which SSI was to render services as follows: Assist the DEPARTMENT of police , ROADS and transport , to manage the implementation of the road repairs and rehabilitation programme for the Free State road network.

7 Your appointment is limited to road 12 to road 23 as per the DEPARTMENT s priority list. Your appointment will be with immediate effect and for the duration of the contracts.. [3] In effect, SSI was the engineering firm that was appointed the project manager for the road repair and rehabilitation programme set out in the agreement referred to above. The total contract value was approximately R69 Clause of the agreement reads as follows: Where the client has required the Consultant to appoint selected consultants as the Consultant s sub-consultants, fees owed to those sub-consultants shall be due to the Consultant in addition to the Consultant s own fees.

8 I shall refer to that agreement as the main agreement. In this judgment the terms sub- consultant and subcontractor are used interchangeably. [4] The main agreement contemplates the appointment, with the approval of the Province, of sub-consultants. Environmental services are specifically mentioned in the main agreement. When the services of an environmental sub-consultant were required the approval of the Province was obtained and tenders to that end were invited. Terra 1. This appears to be a small part of a much larger initiative that was described by the Minister of Finance in correspondence that formed part of the record as a multi-year R4,2 billion project.

9 5. Graphics (Pty) Ltd, a company that trades as Terra Works (TW), submitted a bid and subsequently a written agreement with the approval of the Province was concluded between TW and SSI. I shall refer to that agreement as the sub-consultancy agreement. [5] The sub-consultancy agreement was concluded on 22 October 2010. The contract value was R1 593 , excluding VAT and disbursements. Monthly payment terms were stipulated. It is common cause that both SSI and TW performed their obligations in terms of the aforesaid written agreements. TW received two payments from SSI in the amounts of R80 and R76 on 30 September 2011 and 12 December 2011, respectively.

10 A total of approximately R13,7 million was paid by the DEPARTMENT to SSI, with the last payment being made on 6 October 2010. [6] After the Province had failed to pay SSI the balance still owing, the latter instituted action in the Free State Division of the High Court, claiming payment of an amount of R44,7 million. That litigation has not yet run to a conclusion. I pause to record that in that litigation the Province s defences are substantially the same as in this case. It also unsuccessfully raised an exception to an alternative claim by SSI that was based on unjust enrichment. [7] Since SSI had not been paid, it could not pay TW the balance due to the latter for the work done and services rendered in terms of the sub-consultancy agreement. 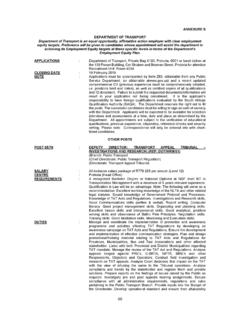 ANNEXURE S DEPARTMENT OF TRANSPORT - the … 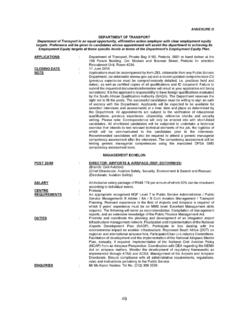 No. R. DEPARTMENT OF MINERAL RESOURCES NO. …

PART A: THE GUIDELINE 1. FOREWORD 1.1 The Commission of Inquiry into Safety and Health in the Mining Industry chaired by the Honorable Mr. Justice RN Leon identified haulage and transport accidents as the second largest category of accidents in mines. 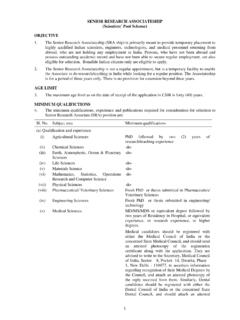 3 APPLICATION 5. The prescribed application proforma is given as Annexure-(ii). The instructions relevant to the form may kindly be read in Annexure-(i) before filling it. 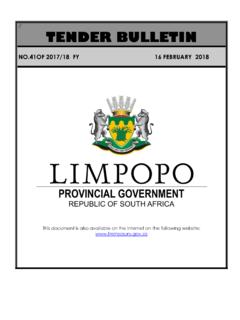