The Most Valuable Authors in Vintage Paperback

The most Valuable Authors in Vintage Paperback By Bruce Black Just as in collecting their hardcover counterparts, numerous factors lead to collectibility in Vintage paperbacks. First printings are more Valuable than later ones. Collectible Authors and themes obviously add to value. And condition is perhaps even more critical than in hardcovers. It is practically impossible to read a Paperback without damaging it to some extent, and depending on the care of the readers, a volume can easily go from Near Fine to A Poor Reader's Copy after only having been used a couple times. Scarcity is obviously the factor that drives value. The most popular Authors ' books are usually not the most Valuable simply because printing runs were larger and more of their volumes exist. For that reason, works by Agatha Christie, Earl Stanley Gardner, Rex Stout, John Dickson Carr, Mary Roberts Rinehart, Ellery Queen, Dorothy L.

The Most Valuable Authors in Vintage Paperback By Bruce Black Just as in collecting their hardcover counterparts, numerous factors lead to collectibility

1 The most Valuable Authors in Vintage Paperback By Bruce Black Just as in collecting their hardcover counterparts, numerous factors lead to collectibility in Vintage paperbacks. First printings are more Valuable than later ones. Collectible Authors and themes obviously add to value. And condition is perhaps even more critical than in hardcovers. It is practically impossible to read a Paperback without damaging it to some extent, and depending on the care of the readers, a volume can easily go from Near Fine to A Poor Reader's Copy after only having been used a couple times. Scarcity is obviously the factor that drives value. The most popular Authors ' books are usually not the most Valuable simply because printing runs were larger and more of their volumes exist. For that reason, works by Agatha Christie, Earl Stanley Gardner, Rex Stout, John Dickson Carr, Mary Roberts Rinehart, Ellery Queen, Dorothy L.

2 Sayers, George Harmon Coxe, Brett Halliday, Mickey Spillane, Erskine Caldwell, etc, while collectible, are not generally more Valuable , more expensive today. The exception obviously occurs when scarcity comes into play. Due to relatively small printing runs at Pocket Book, a first printing of a book such as Pocket Book 228, The Bigger They Come, by Fair (Erle Stanley Gardner), is worth a bit more than Gardner's other books (it was the first in his popular Bertha Cool/Donald Lam series, most of which were later reprinted by Dell). The best example, however, is Pocket Book #5, The Murder of Roger Ackroyd, by Agatha Christie. ALL of those first ten first printings of Pocket Books in 1939 are very collectible (the runs were small, and only released in New York City), and this one is exceedingly Valuable today.

3 (The picture shown on this page is a fifth printing, but the first printing is identical.). However some Authors are Valuable in general. A discussion of the most Valuable Vintage Paperback Authors follows. Pocket Book # 5, Pocket Book 228, Avon (nn) 20, Detective Book D1 (Jonathan). Relatively Valuable books (due to scarcity) by popular Authors . ( Ellery Queen is a pseudonym for cousins Frederic Dannay and James Yaffe.). Dashiell Hammett Of particular interest to Vintage Paperback collectors were the pulp magazine Authors , and especially the hardboiled mystery Authors in publications such as Black Mask and Dime Mystery. Hammett was not the first in the genre, but he was definitely the most famous. His five novels were reprinted by Pocket Book, and while extremely collectible, the printings were too large to make most of them very high-priced today (the one big exception is shown below).

4 It is the collections of his pulp short stories that are currently more Valuable . One of his most popular characters was never named; he was only identified as an operative of the Continental Detective Agency, and was therefore dubbed The Continental Op. Two of his other main characters are still very famous today: Sam Spade (The Maltese Falcon and other works) and Nick Charles (The Thin Man). Pocket Book 268 (3rd prtg in rare dust jacket), Dell 154, Dell 421, Jonathan J36. Bestseller B62, Bestseller B81, Dell 379, Dell 411. Raymond Chandler An immensely popular hardboiled author, Chandler didn't start writing until he was 45. years old. Chandler's earliest stories for Black Mask lacked some the panache of his later short stories and novels, and it's fun to see his unique talent evolve into the unrivaled use of tough-guy simile and metaphor (many, many writers have tried to duplicate it).

5 His seven novels were all based around the same character, Phillip Marlowe. Marlowe was possibly America's best-loved PI, tough but sensitive, susceptible to a lady's charm, knew which cops were on the take and which judges were corrupt, and he was even known to turn down his fee if he discovered that his client was crooked. Pocket Book 320, Pocket Book 846, Avon (nn) 38, Avon 63. Armed Services Edition 838, Murder Mystery Monthly 43, Pocket Book 212. Cornell Woolrich (& pseudonym William Irish). It's impossible to talk about noir in writing for books or film without mentioning Woolrich. All of his works were dark, and some, such as Deadline at Dawn, were set completely at night. His personal life was a shambles, and he died a millionaire while living alone in a New York hotel room, a crippled alcoholic.

6 One of his stories, It Had to Be Murder, was the basis for Alfred Hitchcock's movie Rear Window. You could never really be sure if his stories would end happily or not, but they were always written in such a way that you'd be forced to empathize with the main characters, who would struggle against psychologically crushing odds. Practically all of Woolrich's Vintage books are highly collectible and Valuable in today's market. Graphic 108, Popular Library 137, Popular Library 431, Murder Mystery Monthly 27. Gold Medal 136, Avon 220, Dell 10 26, Popular Library 473. Fredric Brown A prolific pulp magazine author for Detective Tales and Dime Mystery, Brown started writing crime novels in 1947, and then for some reason switched to science fiction in the late 50's. He is hugely popular in those genres, and collectors of both have kept his books in great demand.

7 His works tend to have quirky endings that astonish and delight readers, and while other great Authors tend to leave us contemplating great philosophical questions, reading Fredric Brown makes us think and it's also just plain fun. Bantam 302, Bantam 831, Pennant P59, Dell 1st Ed 2E. Bantam 990, Bantam 835, Bantam 1077, Bantam A1546. Harry Whittington Whittington was an immensely popular writer of action novels (mystery, western and sleaze ) who wrote in true pulp style. His stories are exciting, the characters' situations seemingly impossible, and the pace often leaves the reader breathless. In his novel You'll Die Next! an average fellow gets up in the morning, kisses his wife goodbye, steps outside and is beaten to a pulp by a guy that warns him to stop messing with a fellow he's never heard of.

8 He spends the whole book trying to figure out who his antagonist is and what it is he's being threatened about. That's typical Whittington. He published more than 200 novels, and he has such an avid fan base that practically all of his Vintage books are very Valuable . Graphic 41, Ace D-63, Handi 120, Gold Medal 401. Uni 58, Gold Medal 740, Graphic 46, Handi 138. David Goodis Goodis appears to be one of those writers that achieved success not just through talent, but also through hard work, churning out hundreds of works for pulp magazines while remaining a virtual unknown. Then he wrote Dark Passage, which was an instant success, and was almost immediately made into a movie with Bogart & Bacall. But instead of riding the wave created by his achievement, he slid back into the pulps, or at least the pulp novels, the Paperback originals that were most commonly published by Gold Medal and Lion.

9 It's as if he lived to struggle, and his noir creations seemed to reflect that. David Goodis was not a happy man. After his death in 1967, his works went out of print altogether until Black Lizard revived them. He is now one of the most collectible of all Vintage period Authors , and his books are ALL extremely Valuable . Dell 221. Bestseller B121. Gold Medal 226. Gold Medal 256. Gold Medal 428. Gold Medal s1083. Charles Willeford If I had to pick just one of the Authors in this article that is THE most Valuable (at least at this point in time), it would probably have to be Willeford. His writing is down-to-earth, gritty, intriguing, and his characters are so real that they're downright scary. He was on active duty in the military, then in and out of odd jobs throughout most of what I call the Vintage Paperback era, and he released only about a dozen titles in the 50's and 60's.

10 He created his best know character, Hoke Moseley, much later, in 1984 (Miami Blues). His first novel, High Priest of California, printed as half of a Royal Giant in 1953, barely sold a third of its only printing. It was reprinted later, also by the Universal Publishing Company, under the Beacon label but they misspelled his name on the cover! most of his works during the Vintage period were released by adults-only publishers, and then were re-released later as hardboiled mystery/suspense by Black Lizard. Royal Giant 20, Beacon B130, Newsstand Library U137, Belmont 90-286. Jim Thompson If Willeford's characters were scary, then Jim Thompson's were downright terrifying. Thompson wrote about disturbed people that were so realistic, so plausible, that you are forced to believe the folks you see on the evening news talking about a neighbor that seemed like such a nice, average guy. 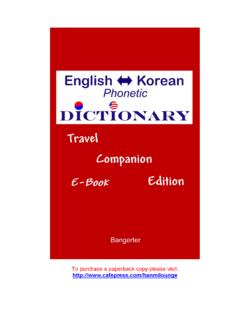 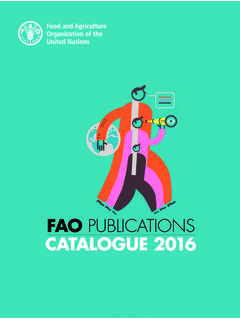 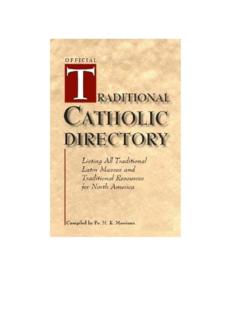 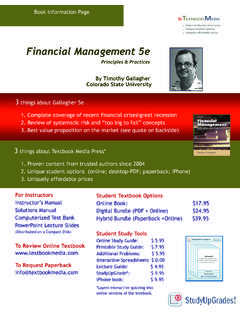 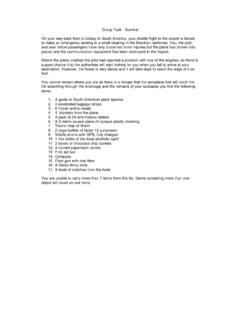 Group Task - Survival On your way back from a holiday in South America, your shuttle flight to the airport is forced to make an emergency landing in a small clearing in the Brazilian rainforest. 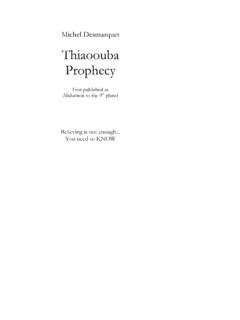 Michel Desmarquet Thiaoouba Prophecy First published as Abduction to the 9 th planet Believing is not enough... You need to KNOW 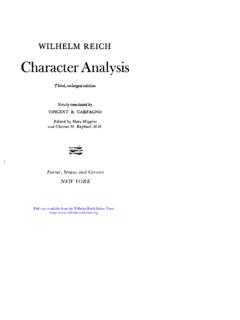