The New Cyanotype Process Introduction The Cyanotype Process is 153 years old. Can there really be anything new to say about it? You probably know something of its history: invented by Sir John Herschel in 1842, (1). Cyanotype was the first successful non-silver photographic printing Process . It was used for the first photographically illustrated book, (2) and later became popular with some pictorialists, for whom a commercial paper, called ferro-prussiate, was marketed. (3). Being simple, cheap and farily permanent, it also enjoyed an extended period of commercial success as the blueprint Process for copying drawing-office plans, until it was made obsolete by the invention of dry, plain paper photocopying.

The cyanotype sensitizer is a delicate test of paper quality - especially if the coated paper is left for some hours in the dark at normal relative humidity: any change of the bright yellow coating towards a green or, worse, blue colour is an indication of impurities or

1 The New Cyanotype Process Introduction The Cyanotype Process is 153 years old. Can there really be anything new to say about it? You probably know something of its history: invented by Sir John Herschel in 1842, (1). Cyanotype was the first successful non-silver photographic printing Process . It was used for the first photographically illustrated book, (2) and later became popular with some pictorialists, for whom a commercial paper, called ferro-prussiate, was marketed. (3). Being simple, cheap and farily permanent, it also enjoyed an extended period of commercial success as the blueprint Process for copying drawing-office plans, until it was made obsolete by the invention of dry, plain paper photocopying.

2 The word 'blueprint' still persists in our language, however, with an expanded meaning. What of the Cyanotype Process today? It's certainly useful as an inexpensive, easy introduction to hand-coated alternative printing; in my experience, workshop participants feel a good deal more comfortable at the outset, knowing that the sensitizer they are wasting so freely does not cost an arm and a leg. When they've got it under control, they can proceed to platinotype at 20p per drop! If the growing number of cyanotypes now to be seen on gallery walls and in published commercial work (4) is anything to go by, the Process is also providing a significant number of contemporary photographic artists with an expressive medium in its own right, in spite of (or maybe because of) its rather strident colour.

3 The ability to coat this inexpensive sensitizer onto surfaces other than paper, such as wood or textiles, gives it added versatility. Now, after 150 years of use, you might think that there couldn't possibly be any scope for improving the Process ; the textbooks (5) commonly recommend essentially the same recipe for pictorial purposes - one that has remained unchanged since the day that Herschel devised it by mixing strong solutions of ammonium iron(III) citrate and potassium ferricyanide. Only the favoured concentrations vary a bit from practitioner to practitioner.

4 There are many up-to-date, accessible accounts of the traditional method, for instance by Hope Kingsley (6) and Terry King (7), so I won't repeat their work here. What I hope to show in this article is that the Process can even now be improved and made more user-friendly, at the cost of rather more chemical manipulation in preparing the sensitizer. But first, let's examine some of the properties of the image substance itself. The Nature of Prussian Blue Prussian Blue was first made accidentally in 1704, from ox blood or other animal bits, by near-alchemical procedures (8) that defy my analytical powers.

5 (Vegetarian photographers may be reassured that it is now made quite inorganically.) Although the substance has been studied for over 250 years, chemists have only recently achieved a full understanding of its complex and varied nature. Misconceptions in some older chemistry texts are still being perpetuated in the alternative photographic literature. Here beginneth the chemistry lesson. Prussian Blue is essentially ferric ferrocyanide, [or Iron(III) Hexacyanoferrate(II) in modern chemspeak] but there exists a whole range of such iron blues, having compositions depending on their precise method of preparation.

6 (9) At the molecular level, they all have in common a characteristic cubic structure, but this lattice can accommodate variable amounts of water and metal ions within it, so formulae range from KFe[Fe(CN)6].5H2O (the so-called "soluble" Prussian Blue) to Fe4[Fe(CN)6]3 .15H2O ("insoluble" Prussian Blue). (10) In fact, all forms of Prussian Blue are highly insoluble in water; the "solubility" in the former case is an illusion caused by its easy dispersion as tiny (colloidal) particles which form a blue suspension in water, which looks like a true solution.

7 Chemists call this Process peptization, and it is responsible for some of the problems that beset the Cyanotype Process . By the way, the ability of the Prussian Blue lattice to act as host for relatively large amounts of impurity ions has recently been put to good use by 'locking up' the radioactivity that was deposited on the uplands of North Wales and Cumbria following the Chernobyl disaster. (11) Spreading Prussian Blue on the contaminated soil inhibited the uptake of Caesium 137 by grass; our lamb chops were thus safeguarded from radioactive contamination, but at the price, perhaps, of turning the green hills of Britain to navy blue!

8 Here endeth the whimsical digression. Although the Prussian Blue pigment of commerce can be made in a form fairly resistant to peptization and destruction by alkalies, (12) the variety produced by the Cyanotype Process is unfortunately -and inevitably- the "soluble" form. It is therefore rather easily washed out of the paper and 'bleached' by strong alkali, which converts it to very weakly coloured salts of iron. Disadvantages of the Traditional Process As an occasional user of Cyanotype , I found that the traditional method seemed to suffer from some irksome features - or was it just my incompetence?

9 If, gentle reader, you have already tried the Process , see if you agree with me that:- 1. Printing can be rather slow compared with other iron-based processes such as the palladiotype; exposures of thirty minutes or more to a typical UV light source are not unusual. 2. The two ingredients have to be stored separately, and the solution of Ammonium Iron(III) Citrate provides an excellent nutrient for mould growth, so that after a month or two, it can come to resemble one of Prof. Quatermass's more bizarre experiments (13).

10 3. The sensitizer is often not well-absorbed by the paper and some tends to lie on the surface; being hygroscopic, it causes a tackiness which can wreck your negative. 4. It is disappointing to watch your picture gurgling down the sink as large amounts of the image substance, "soluble" Prussian Blue, wash out during the wet processing. Heavy overexposure is usually recommended as the only remedy for this drastic weakening of the image. 5. Stained highlights are quite common, due to inadequate clearing and 'bleeding' of the Prussian Blue; they may be difficult to wash out without losing gradation in the high values. 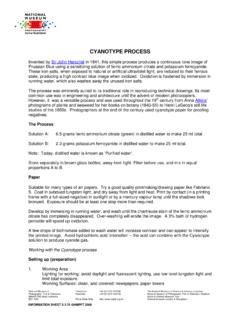 11 In such a plant, the drying cycles are extended, with 24 to 45 hours being quite common in certain cases. This is a direct result of the low evaporative rate, which A Blueprint for Conserving Cyanotypes

The technical history of the cyanotype process has been elucidated from a study of the original experimental notes of Sir John Herschel and others, in order to replicate early cyanotypes for experimental testing. Their chemical vul-nerability is threefold: 1. … Workshop: Cyanotype Printing a Botanical Field Guide An all-age workshop that introduces a group to the chemistry of early photographic processes and the basics of design and composition. We will use these methods to identify and catalog plants, and understand … 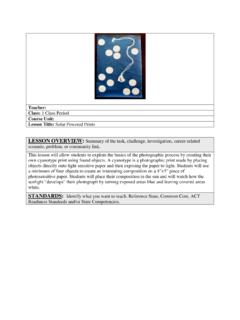 Cyanotypes Materials: Item Amount per student Amount for 24 students Aqueous solution containing Potassium Ferricyanide and Ferric Ammonium Citrate ... • Ferric ammonium citrate is an irritant and the cyanotype solution is light sensitive (of course!). It will stain your skin. Wear gloves! Procedure: 1. Bring any small items you wish to print ... Topics in Photographic Preservation, Volume Fourteen (2011) 237 THE EFFECTS OF ACIDIC, ALKALINE, BUFFERED, AND NON-BUFFERED ENCLOSURES ON CYANOTYPES LAUREN HELD, DANIEL BURGE, AND DOUGLAS NISHIMURA ABSTRACT The purpose of this experiment was to determine whether the belief that cyanotype prints will be

techniques, the cyanotype is a creative, relatively safe and exciting process to start with. Anna Atkins laid plants on cyanotype paper to “photograph” them instead of drawing them. This is the book cover of her book “British and Foreign Flowering Plants and Ferns”. CYANOTYPE TONING Theory : There are three types of chemicals that affect Cyanotype prints. These chemicals can be used singly. One approach is the bleach the color out of a dark print. Another is to intensify the color of a normal print. A third is to alter the tone of a print. And then Creating the Digital Negative George L Smyth . Preface . I had an opportunity to look at some original copies of Stieglitz's Camera Work, printed at the beginning of the 20th century. I looked forward to being able to view the images, but also got interested in an