THE POWER OF - Global PRN

Practical principles of prayer and fasting for today BENNIEBENNIEBENNIEBENNIE PEETPEETPEETPEET MOSTERT &&&& GROBBELAAR THE POWER OF FASTING AND PRAYER Fasting is a laudable practice, and we have reason to lament it , that it is generally neglected among Christians. - Matthew Henry I wonder whether we have ever fasted? I wonder whether it has ever occurred to us that we ought to be considering the question of fasting? The fact is, is it not, that this whole subject seems to have dropped right out of our lives and right out of our whole Christian thinking. - D. Martin Lloyd-Jones It was not Christ s intention to reject or despise fasting .. it was His intention to restore proper fasting. - Martin Luther. America and much of the world will, before the end of the year 2000, experience a great spiritual awakening. This divine visit of the Holy Spirit from heaven will kindle the greatest spiritual harvest in the history of the Church.

1 Foreword Spiritual disciplines such as meditation, intercession, fasting and to a great extent also prayer, have been neglected in modern times.

Power, Meditation, Spiritual, Of the power

1 Practical principles of prayer and fasting for today BENNIEBENNIEBENNIEBENNIE PEETPEETPEETPEET MOSTERT &&&& GROBBELAAR THE POWER OF FASTING AND PRAYER Fasting is a laudable practice, and we have reason to lament it , that it is generally neglected among Christians. - Matthew Henry I wonder whether we have ever fasted? I wonder whether it has ever occurred to us that we ought to be considering the question of fasting? The fact is, is it not, that this whole subject seems to have dropped right out of our lives and right out of our whole Christian thinking. - D. Martin Lloyd-Jones It was not Christ s intention to reject or despise fasting .. it was His intention to restore proper fasting. - Martin Luther. America and much of the world will, before the end of the year 2000, experience a great spiritual awakening. This divine visit of the Holy Spirit from heaven will kindle the greatest spiritual harvest in the history of the Church.

2 But before God comes in revival POWER , the Holy Spirit will call millions of God s people to repent, fast, and pray in the spirit of 2 Chronicles 7:14 - If my people, who are called by My Name, will humble themselves and pray and seek My face and turn from their wicked ways, then I will hear from heaven and will forgive their sin and will heal their land. The scope of this revival depends on how believers in America and the rest of the world respond to this call. The Holy Spirit gave me this assurance during a 40-day fast. I have spent fifty years studying God s Word and listening to His voice, and His message could not have been more clear. Dr. Bill Bright, President and Founder of Campus Crusade for Christ, said this after a 40-day fast in 1994. 4 Contents 1. Foreword 2. Fasting as a Biblical practice 3. Contemporary examples of fasting 4. What is fasting and prayer? 5. What do we gain through prayer and fasting? 6. Different kinds of fasting 7.

3 Practical hints for prayer and fasting 8. When should we fast? 9. How to separate yourself for a day to spend time with the Lord? 10. Prayer and fasting chains 11. Questions about fasting and prayer 12. Suggestions for a prayer and fasting programme 13. A suggestion for a diet during a fast 14. Study on Isaiah 58 15. 7 Steps to begin with 16. For further study 1 Foreword spiritual disciplines such as meditation , intercession, fasting and to a great extent also prayer, have been neglected in modern times. The church has been asking for these disciplines again in the last while. This book is an attempt to let the church of the Lord Jesus Christ once again experience the wonder of fasting and prayer. We do not always understand the spiritual disciplines of the Bible, simply because we cannot understand God. Fasting is a spiritual exercise which always belongs with prayer and therefore fasting is attached to prayer.

4 Fasting helps people to pray in a more focussed manner and the more a person prays, the more time God has to change us. If God gets time to change people, He can give revival - and this is what every child of God is crying out for. Rev. Peet Grobbelaar (Krugersdorp - January 1999) Prayer and fasting is one of the lost disciplines of the church. Fasting was often misused in the past and many unbiblical practices were included in fasting and prayer and over time this led to a resistance to prayer and fasting. This could be said for nearly every discipline and doctrine in the church. There is a positive note though - that there is currently a rediscovery of the value of prayer and fasting and that much is being written about it and much is already being applied in an ever increasing front in the church - with positive results. May the guidelines in this book help many Christians across the nation to get a better understanding of the Biblical and practical understanding of prayer and fasting.

5 Dr. Bennie Mostert (Pretoria - January 1999) 2 1 Fasting as a Biblical practice The morning of the 39th day "What did you say? For 40 days? That's impossible!" That was my first reaction when I heard that two of my friends were fasting for 40 days. That was in 1991. Till then, I had only fasted only once or twice at the most for 24 hours at a time. I discovered the principles, practice and value of prayer and fasting through my contact with Francois Vosloo and Operation Mobilisation. As time went on, I also began reading about fasting and later I even fasted every Thursday for about a year. It was a new experience. C. Peter Wagner spoke at a meeting in Korea (October 1993) about "A Day to Change the World" which was to be held on 25 June 1994. 25 million believers from all over the world were going to pray together in their various countries for revival and world evangelism. This day was going to be preceded by various prayer initiatives and among others, a 40 day fast.

6 It was going to start on 17 April 1994 and would continue till 25 June 1994. After much prayer and consideration, I was convinced that I should fast for the full 40 days. I decided to go on a liquid fast, because I was working full day and was involved in the organisation for "A Day to Change the World." The liquid fast consisted of any types of liquid and once or twice a day, we drank a cup of soup. I began to fast with a number of other Christians on 17 April. The first three days were difficult, but then it became easier - till we got to the 21st day. It was as if we came up against a brick wall. It felt as though we could not get through to God. There was no progression. When we read the Bible it felt "lifeless". All five of us experienced the same feelings (another person joined us in fasting from the 20th day). A friend phoned me on the 33rd day and asked me to come and help him. They were involved in a tremendous struggle. We were involved in a spiritual battle every waking moment for the days following that day.

7 This battle was one of the most intense "fights" that I have ever been involved in. When the POWER of the enemy was eventually broken on the morning of the 39th day, God came into our midst. It is difficult to describe this. Suffice it to say that God said to us at 02h30 that revival will come, the unreached will hear the gospel, thousands of South Africans will go to the nations to tell them about Christ and that the young people will return to the churches. The POWER of fasting was no longer a theory for me. It became a reality. There was a 40 fast again during 1996, this time for the healing of our country. This fast preceded the National Day of Prayer on 7 July 1996. This fast was marked by deep personal confession of sin, where God dealt 3 with Christians all over the nation about pride and other personal sins as well as national sins. (BM) Fasting in Scripture Fasting and praying is something that many Christians are unfamiliar with.

9 " Some people think that Jesus was advocating that prayer and fasting should be discontinued because of this scripture as well as :15-17. But it is not the case. Jesus is indicating rather how we must fast and pray and what is not acceptable to the Father. This chapter needs to be read in its context. This chapter is speaking about the do's and don'ts about giving to the poor, about prayer, forgiveness, fasting and the accumulation of wealth. If we want to cancel fasting, then we will have to also cancel prayer, giving to the poor, forgiveness, etc. Paul fasted often Paul fasted often according to his own testimony. Paul wrote in 2 Corinthians 11:27 "in weariness and toil, in sleeplessness often, in hunger and thirst, in fastings often, in cold and nakedness -" He uses two expressions a) hunger and thirst and b) fastings. The Greek word for "hunger" is limos which literally means the lack of food or its unavailability. The Greek word for "fastings" is nesteia and means the abstinence from food for religious reasons.

10 Paul says clearly that he was often hungry because there was no food and also was without food because he was fasting. In reading the book of Acts, it is confirmed that Paul exercised fasting and encouraged it (Acts 9:9-19; 13:1-2; 14:23; 2 :5; 1 Cor. 7:5). The New Testament confirms fasting 1 Elmar L. Towns book Fasting for spiritual Breakthrough is an excellent book which explains the scriptural foundation for fasting. 4 It is simply not true that fasting was an Old Testament practice that did not happen in the New Testament. It was not something unfamiliar to the early Christian church and it was also not something unusual in the time of the Reformation and the centuries that followed. Nowhere in the New Testament is fasting forbidden and the impression is also not given that it is no longer necessary to fast and pray. The Lord Jesus only makes one condition and that is righteousness. Calvin says that Christ does not say that fasting has been abolished. 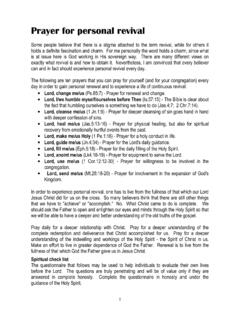 1 Prayer for personal revival Some people believe that there is a stigma attached to the term revival, while for others it holds a definite fascination and charm. 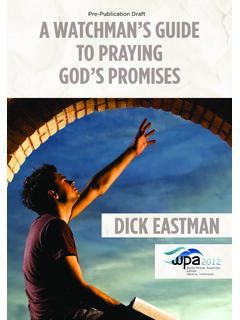 their community, nation, and the world. Harmonious Prayer One key characteristic of this movement of “Walls of Prayer” is that participants in a specific “Wall” function in “harmonious” agreement over prayer assignments provided to them by the leadership of their specific Wall. The purpose of this 31-day guide is to help strengthen 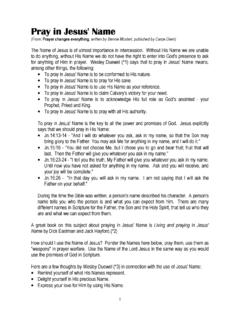 1 Pray in Jesus' Name (From: Prayer changes everything , written by Bennie Mostert, published by Carpe Diem) The Name of Jesus is of utmost importance in intercession.