The Punctuated-Tuckman: Towards a New Group …

The Punctuated- tuckman : Towards a New Group development Model Andrew C. Hurt and Sarah M. Trombley Texas A&M University Two commonly accepted theories of Group development are the tuckman model ( tuckman & Jensen, 1977) and the Punctuated-Equilibrium model (Gersick, 1988). Critiques of both are that they assume linear development and that they fail to account for outside influences. In contrast, Tubbs (2004) suggests that Group development should be viewed from a systems perspective. This paper proposes a model that could assist the educator of Group development theories in integrating tuckman , PEM, and Tubbs s models. Keywords: tuckman , Punctuated-Equilibrium, Systems theory As organizations attempt to achieve higher levels of performance, organizational leaders have begun focusing on creating high functioning groups.

disbanded as a group. Tuckman’s five stage model of group development was developed over 30 years ago and since then has been critiqued by numerous researchers. First, there is an assumption that groups progress linearly through each of the five stages. Several authors (Agazarian & Gantt, 2003; Connors & Caple, 2005; Miller, 2003; Tubbs, 2004 ...

1 The Punctuated- tuckman : Towards a New Group development Model Andrew C. Hurt and Sarah M. Trombley Texas A&M University Two commonly accepted theories of Group development are the tuckman model ( tuckman & Jensen, 1977) and the Punctuated-Equilibrium model (Gersick, 1988). Critiques of both are that they assume linear development and that they fail to account for outside influences. In contrast, Tubbs (2004) suggests that Group development should be viewed from a systems perspective. This paper proposes a model that could assist the educator of Group development theories in integrating tuckman , PEM, and Tubbs s models. Keywords: tuckman , Punctuated-Equilibrium, Systems theory As organizations attempt to achieve higher levels of performance, organizational leaders have begun focusing on creating high functioning groups.

3 For over 30 years, educators have been requiring their students to learn these five stages: forming, storming, norming, performing, and adjourning. Admittedly, the tuckman model has its benefits yet, if educators want to provide students with a well rounded education on Group development theories then they must divert their instruction away from the tuckman model. While it is appropriate for educators to continue to teach the tuckman model, care needs to be taken to ensure that other Group development theories are introduced to students. tuckman s model is flexible enough to allow for integration of other Group development models. One model in particular, Connie Gersick s Punctuated-Equilibrium Model (PEM) (Gersick, 1988, 1989, 1991) provides ample opportunity for a hybrid of tuckman s and itself. The PEM suggests that groups go through three phases as they progress toward the accomplishment of a task.

4 Each phase is marked by an increased level of task performance as time runs short and deadlines approach. Although Gersick s model is not nearly as well known as the tuckman model, it does provide educators a method of gauging time within Group development . Admittedly, both models have several similarities. Both models assume that Group development is a linear process and use the idea of stages to depict moments in Group development . Finally, fundamental to both models is a positivist assumption that groups will strive for success or the accomplishment of an objective. These similarities between the two models are what several authors (Agazarian & Gantt, 2003; Connors & Caple, 2005; Tubbs, 2004) also consider to be limitations of both models. Tubbs (2004) approaches Group development from a systems perspective. In what he called general systems theory (p.)

5 14), Ludwig von Bertalanffy proposed that conceptualizing an event as a system allows researchers to study the dynamic nature of that event. Tubbs suggests that we can use von Bertalanffy systems theory to analyze Group development . Tubb s theory of Group development proposes three basic processes that are the inputs, outputs and throughputs of a Group . Each of these three processes allow a Group to change based on the events that take place. Additionally, a systems perspective allows the Group to adapt by learning from their misfortunes through feedback. In Tubbs s system, there is feedback connecting every point within each process. This feedback allows the Group to change based on desired performance outcomes. These three scholarly accepted, yet differing views of how groups develop, provide educators a unique Copyright 2007 Andrew C.

6 Hurt & Sarah M. Trombley perspective on Group development . However, given the hypothesized over-reliance on the tuckman model, the era in which these theories were developed, and the critiques of each theory, it seems appropriate to attempt an integration of these three models in order to assist the educators of Group development theories. Thus the research question addressed in this study is how the Group development theories proposed by tuckman , Gersick, and Tubbs can be integrated. Integration of these three models is important for several reasons. First, integration will create a better, more robust model to describe Group development . The tuckman model does a passable job of allowing an individual to conceptualize the stages that groups move through; however it does not provide adequate clarification as to when each of these phases starts and stops.

7 In contrast, the PEM looks at Group performance as a function of time, yet does a less than adequate job of clearly defining the stages of Group development . Likewise, Tubbs' systems perspective provides ample mechanisms to facilitate changes in groups, but does not focus on how the Group accomplishes a task. Thus by integrating, a more comprehensive model for describing Group development could be created. Second, an integrated model will provide educators a mechanism for presenting to students a clearer view of how groups develop. As Chang, Duck and Bordia (2006, p. 539) suggest, as educators, are we setting up our classroom groups for potential failure by not providing sufficient training prior to Group experiences. Students often find it difficult to remember and categorize the various stages, phases, and/or strata s of the multiple Group development models.

8 An integrated model will reduce these problems by giving instructors a more universal model of Group development . Finally, it is also the hope that an integrated model will encourage educators to stray from their over-reliance on the tuckman model. An integration of tuckman s, Gersick s, and Tubbs models will additionally benefit the field of Human Resource development (HRD). As a discipline that walks a fine line between the realm of education and the realm of business, HRD would benefit greatly from a new model of Group development . As mentioned above there are numerous reasons for integrating these three models from the educator s perspective. However, there are also several benefits of integration from the business person s perspective. For-profit organizations are becoming even more reliant on groups to perform their operations than ever before (Miller, 2003; Tubbs, 2004).

9 Often businesses do not have time to adequately consider all of the factors that contribute to Group development therefore integrating three scholarly accepted theories would expedite this organizational process. Additionally, an integrated model would provide a better perspective on the entire Group development process, thus allowing an organization to potentially increase the efficiency and effectiveness of their groups. Literature Review In order to discuss an integration of tuckman s, Gersick s, and Tubbs Group development models, some background information on these three models is needed. This section provides a brief literature review of the tuckman model, the Punctuated-Equilibrium model, and a systems approach to Group development ; how they were formed, research conducted on them, and their critiques.

10 tuckman Model In 1965, Bruce tuckman published an article dealing with the stages of Group development . In total, he analyzed 50 articles dealing with Group development from three types of groups: therapy groups, training groups, and laboratory groups. tuckman postulated that four general stages of Group development could be identified within each of these three types of groups. These four stages form what we know today as the foundation of the tuckman model and are used to describe how groups progress from their initial formation until the completion of their task. tuckman entitles these stages: forming, storming, norming, and performing. In the first stage , forming, tuckman suggested that members of a Group orient to the task at hand. The Group comes together and formulates what needs to be accomplished, introduces themselves to each other, and establishes initial behaviors for performance. 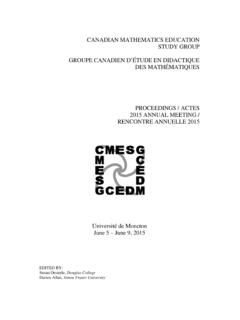 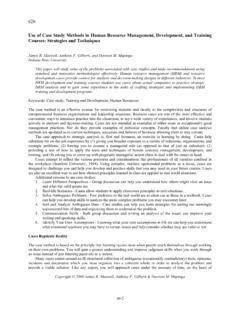 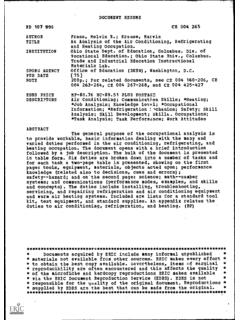 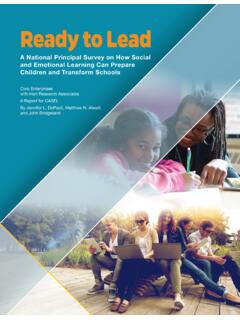 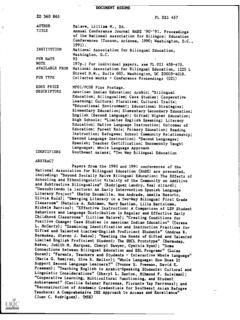 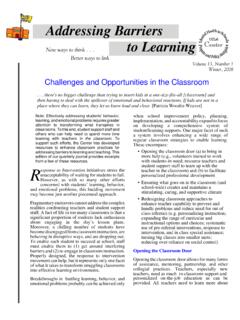 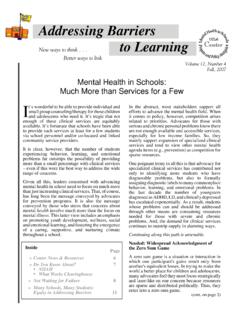 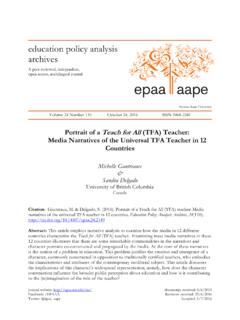 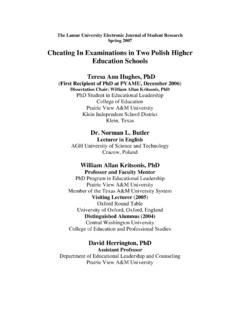 Tuckman, B. & Jensen, M. (1977) Stages of Small Group Development. Group and Organizational Studies, 2, 419-427. For a group to develop properly through the stages of group development, it needs to do the following. 1. Rotate the responsibility of group facilitation. 2. The purpose/mission of the group must be clear to all members and the ...

Stages of Group Development . The diagram in Figure 1 depicts the stages that most groups will go through as they work together (Tuckman, 1965). A team may experience more than one stage at the same time. Understanding these stages of development will help you as …

group development. Bruce Tuckman has developed one of the most well-referenced models in which there are five consistent stages of group development: forming, storming, norming, performing, and adjourning. Most groups progress through these stages. Each stage builds on the previous stage and prepares the group for performing. 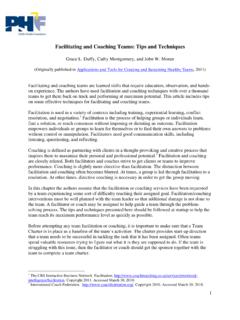 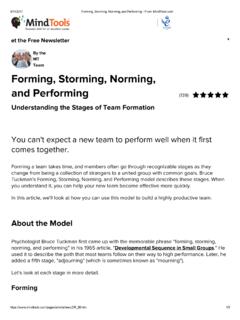 Forming a team takes time, and members often go through recognizable stages as they change from being a collection of strangers to a united group with common goals. Bruce Tuckman's Forming, Storming, Norming, and Performing model describes these stages. When you understand it, you can help your new team become effective more quickly. 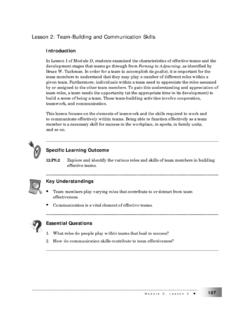 development stages that teams go through from Forming to Adjourning, as identified by Bruce W. Tuckman. In order for a team to accomplish its goal(s), it is important for the team members to understand that they may play a number of different roles within a given team. Furthermore, individuals within a team need to appreciate the roles assumed