2 All subjects were tested for accuracyat target locations from 3 to 75 ft. For all locations, no difference was found in accuracy between expert andintermediate groups (p > ). Experts and intermediates had better results than novices on all locations (p < )except from 3 to 15 ft. Alarmingly, experts were only 10% more accurate than novices between 3 and IS ft. Finally,novices and intermediate shooters were more likely to hit head locations from 3 ft (57%), whereas experts mainlyhit the body location (78%). The results of this study indicate that officers had no advantage over intermediateshooters and a small advantage over enforcement, shooting accuracy, aiming, police shootingSubmitted 12 Nov 2014, accepted 14 Mar 2015 IntroductionOf the 536 officers feloniously killed in the line of dutyfrom 2000-2009, 490 died due to fatal gunshot wounds(Federal Bureau of Investigation (FBI), 2014).

3 Alar-mingly, 290 of those officers were shot in the head andneck (FBI, 2014). Although 29 of the 536 officer deathsoccurred during tactical situations such as hostage tak-ing, high-risk building entry, etc., the remainder of theofficers that were killed were attacked while performingroutine arrests, investigations, traffic stops and otherduties. Numerous articles and reports have addressed theissue of officer-involved use of deadly force and morerecently, the lack of shooting accuracy officers demon-strate while performing in a high-stress gunfight. How-ever, no known research has examined the opposingside: the shooting accuracy of inexperienced anduntrained suspects who might fire at officers. Investigat-ing the accuracy of these inexperienced shooters is nec-essary because their accuracy directly threatens officers'safety in a deadly force conflict.

4 Documentation of theaccuracy and speed of a novice shooter in the evolutionof use of deadly force situations should influence thequality of instruction and standards officers must attainfor firearms training in both pre-service and J Lewinski, Force Science Institute, 124 E Walnut Street Suite120. Mankato, MN 56001, : International Journal of police Science & Management 17(2)Literature reviewIn 2012, there were a reported 8855 homicides and 142,568assaults from firearms among the general, civilian popula-tion in the US (Criminal Justice Information Services Divi-sion, 2014). As noted in a 2011 report, a large contributor tothose crimes are more than million active street gangmembers, outlaw motorcycle gangs and prison gangs acrossthe USA, DC and Puerto Rico (FBI, 2011). Gang members areresponsible for nearly one-half (48%) of all violent crimes inmost States; however, some States, such as Arizona, Califor-nia and Illinois, report that gang members are responsible forover 90% of violent crimes.

5 Although the amount of firearmsand weapons training gang members receive is incrediblyvariable and mostly unknown, recent trends have revealedsome unnerving facts. According to the FBI 2011 NationalGang Threat Assessment, at least 53 gangs have been identi-fied as having infiltrated the US military, learning advancedtechniques in weaponry and combat. Additionally, the FBI(2011) report stated gang members are often able to acquirehigh-powered, military-style weapons, as well as body armor,greatly increasing the risk of potentially lethal encounterswith police officers and possibly other many gang members are becoming incrediblylethal with dangerous weapons from experience in militaryor other training, individuals not affiliated with gangs stillpose a significant threat to officers. As previously stated,over half of all violent crimes committed in most States arenot gang related and, in 2006, nearly 30% of violent felonshad no previous arrest records (FBI, 2011; Reaves, 2006).

6 Additionally, a wide variety of individuals are likely tohave at least rudimentary knowledge of handgun 2011, Gallup, a daily news source, reported that 47%of American adults had a firearm in their home or else-where on their property (Saad, 2011). This is the highestlevel Gallup has recorded since 1993, albeit marginallyabove the 44% and 45% highs seen during that period(Saad, 2011). Although firearm-related crimes havedeclined significantly since 1993 (Langton, 2012), fire-arms are easily accessible to criminals for criminal enter-prise. There are approximately 100 million gun owners inthe USA, of these, 40-45 million own handguns (NationalRifle Association of America -Institute for LegislativeAction (NRA-ILA), 2014). Although the number of theselawfully owned firearms used in crimes is statisticallyminuscule, it is no secret that gang members and othercriminals may acquire otherwise lawfully owned hand-guns through unlawful transactions and/or theft Overall,about million guns, or an annual average of 232,400,were stolen during burglaries and other property crimesin the six-year period from 2005 to 2010 (Langton, 2012).

7 Meanwhile, as the number of citizens with firearms expe-rience is again growing, it has become more apparent thatthe basic firearms training that law enforcement officersreceive may not be sufficient. On average, law enforcementacademy training programs consist of 760 classroom of these programs include an additional manda-tory field-training component, averaging another 450 hours(Reaves, 2009). The average amount of training time spenton firearms skills in the academy is a mere 60 hours, witheven less time spent on self-defense skills (Reaves, 2009).Even with in-service training, law enforcement officers mayonly receive another 12-16 hours or fewer of firearms usetraining over the course of each year (Lewinski, 2013).Understandably, the amount of education and practice withfirearms in which an officer may participate, external to thepolice academy and training, can greatly enhance their per-formance.

8 This can vary from military experience and certi-fication courses to simply hunting or personal training froma family many officers have acquired experience fromnumerous methods of firearms training and may continu-ously work to improve their firearms skills, an argumentcan be made that the current firearms training law enforce-ment officers generally receive is lacking and may result insevere consequences for officers (Chappell, 2008; Marion,1998; Morrison, 1998, 2006; White, 2006). For example, during practice, officers often fire only a single round ata stationary target (Adams et al., 2009; Aveni, 2003), some-times up to 50-75 ft away (Kelly, 2011). This may be ben-eficial in practice, but a majority of gunfights and criticalsituations will likely involve multiple shots being fired inclose proximity, usually within only 3-15 ft of the suspect(Kelly, 2011, 2012).

9 A study of officer-involved shootingsin Philadelphia revealed that the average distance betweenthe suspect and officer during a shooting incident was amere ft (White, 2006).Additional research supports this lack of accuracy, indi-cating that when police officers use deadly force, more oftenthey miss the target than actually hit the target (Matulia,1985). Although hit rates across different police agenciesvary, officer hit rates often do not exceed 50% duringofficer-involved shootings (Copay and Charles, 2001; Gellerand Scott, 1992). In a national survey completed by theDallas police Department (1992), hit rates were recordedas low as 25% in some locations. A study examiningofficer-involved shootings found that as the distancebetween suspects and officers increased beyond 3 ft, non-injurious shooting (to the suspect) increased from 9% to over45% (in the 4-20 ft range) (White, 2006).

10 Theoretically, thismay be due to the emotional response of the officer to thehigh stress level that results when they are assaulted by dan-gerous weapons or suspects shooting in proximity to and atthe officers (Schade and Bruns, 1989).It should be noted that, according to Geller and Scott(1992), academic studies of hit rates or hit accuraciesLewinski et a. I19may be inaccurate due to issues with gaining access tocomplete reports from officers about missed, or off-target shots, and the variance in terms and informationwhich different departments collect and report. Oneexample of this is the use of the terms 'hit rates' and'incident hit rates'; although hit rates are individual sta-tistics for each officer and incident hit rates are consid-ered to be collective shooting statistics for an entiredepartment, they are often used interchangeably inreports of officer-involved is well known and researched that the emotionalresponse of officers to being confronted suddenly by some-one with the perceived intent and ability to kill them willhave a definite effect on the officer's performance (Honiget al.) 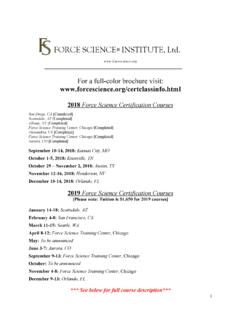 5 What the students will come to understand during these initial days, Lewinski said, is "a protocol for investigating and interviewing that will best assure a fair, balanced…

• Increase the breadth and effectiveness of in-house de-escalation training programs; • Assist investigators and others reviewing uses of … 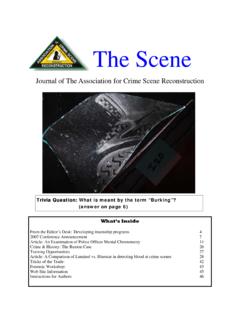 Journal of The Association for Crime Scene …

Background There has been considerable attention in criminal justice and criminological scholarly and professional literature on the use of force, including deadly force… 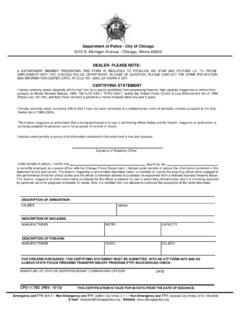 iii ABSTRACT The use of force with police dogs has caught the attention of both the media and the federal government, specifically the Department of Justice (DOJ).

Police, Examination, Canine, An examination of police canine use 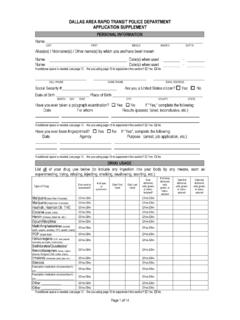 DALLAS AREA RAPID TRANSIT POLICE DEPARTMENT APPLICATION SUPPLEMENT Page 2 of 14 RESIDENTIAL INFORMATION List all addresses where you have lived for the past ten (10) years in chronological order, beginning with 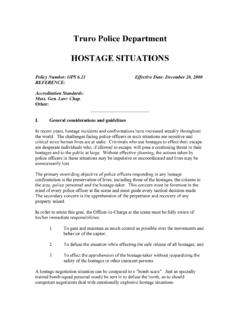 OPS-6.21 HOSTAGES TRURO POLICE DEPARTMENT MANUAL 2 Time is a very important factor to be considered. As a general rule the more time the hostage-taker spends with the hostage, the less likely [s]he is to take the life of the 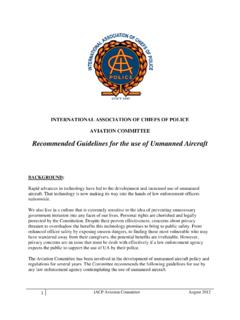 Recommended Guidelines for the use of Unmanned …

INTERNATIONAL ASSOCIATION OF CHIEFS OF POLICE. AVIATION COMMITTEE. Recommended Guidelines for the use of Unmanned Aircraft . BACKGROUND: Rapid advances in technology have led to the development and increased use of unmanned

Police Use of Force in New York City: Findings and ...

POLICE USE OF FORCE IN NEW YORK CITY: FINDINGS AND RECOMMENDATIONS ON NYPD’S POLICIES AND PRACTICES OCTOBER 2015 1 I. Executive Summary and Introduction Use of force is a defining issue in modern policing. Police officers, by … 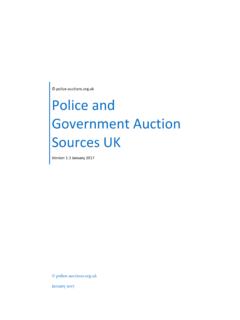 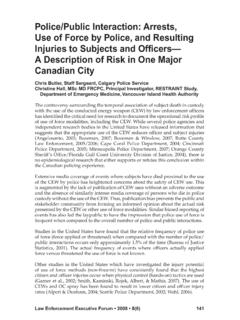 Police/Public Interaction: Arrests, Use of Force by …

Police, Force, Use of force

NATIONAL CONSENSUS DOCUMENTS ON USE OF FORCE2 I. PURPOSE The purpose of this policy is to provide law enforcement officers with guidelines for the use