The Religious Defense of American Slavery Before …

The Religious Defense of American Slavery Before 1830. Larry R. Morrison Historians, because of their own moral sensibilities, have consistently under- valued the slaveholding ethic. However, as Donald G. Mathews has recently shown, this viewpoint was just as natural and consistent as was evangelical The foundation upon which the slaveholding ethic and the proslavery argument was built was the scriptural Defense of Slavery . Nearly every proslavery pamphlet, or article, or speaker made at least some reference to a biblical sanction of Slavery . The reason for such a position should be clear.

The Religious Defense of American Slavery Before 1830 Larry R. Morrison Historians, because of their own moral sensibilities, have consistently under­

1 The Religious Defense of American Slavery Before 1830. Larry R. Morrison Historians, because of their own moral sensibilities, have consistently under- valued the slaveholding ethic. However, as Donald G. Mathews has recently shown, this viewpoint was just as natural and consistent as was evangelical The foundation upon which the slaveholding ethic and the proslavery argument was built was the scriptural Defense of Slavery . Nearly every proslavery pamphlet, or article, or speaker made at least some reference to a biblical sanction of Slavery . The reason for such a position should be clear.

2 From the very beginning much of the attack upon slaveholding had always been upon moral grounds. Opponents of Slavery claimed that it was a sin to hold slaves; the principle of right and wrong involved with Slavery became fundamental to the argument. The South's use of the Bible to defend Slavery and the master-slave relationship was thus an attempt to erect a moral Defense of Slavery . The emphasis from proslavery defenders was always upon a literal reading of the Bible which represented the mind and will of God himself. Slaveholding was not only justified but also moral because it was recognized as such in Holy Scripture.

3 Slavery 's defenders relied on this literal reading as a response to the emphasis upon the "principles of Christianity" used by those opposed to Slavery . Proslavery advocates continually contrasted the Tightness of their position, based on such a literal biblical reading, to the open-ended interpretive religion implied by those opposed to Slavery . In 1820, for example, in the midst of the debates over Missouri statehood, the Richmond Enquirer went to elaborate lengths in a long editorial to emphasize the literal truth of the Bible and its sanction of Slavery . After a long section giving various scriptural sanctions, the article concluded by giving "a plain concise statement of certain propositions that we presume few faithful believers will controvert.

4 " There were five propositions: I. That the volume of sacred writings commonly called the bible, comprehend- ing the old and new Testaments, contains the unerring decisions of the word of God. 1. Donald G. Mathews, Religion in the Old South (Chicago: University of Chicago Press, 1977), see especially pp. xv-xvii, 151-52. See also David Brian Davis, The Problem of Slavery in the Age of Revolution, 1770-1823 (Ithaca: Cornell University Press, 1975), 16. Religious D E F E N S E OF American Slavery 17. II. That these decisions are of equal authority in both testaments, and that this authority is the essential veracity of God, who is truth itself.

5 HI. That since there can be no prescription against the authority of God, what ever is declared in any part of the holy bible to be lawful or illicit, must be essentially so in its own nature, however repugnant such declaration may be to the current opinions of men during any period of time. IV. That as the supreme lawgiver and judge of man, God is infinitely just and wise in all decisions, and is essentially irresponsible for the reasons of his conduct in the moral government of the world so it is culpably audacious in us to question the rectitude of any of those decisions merely because we do not apprehend the inscrutable principles of such wisdom and justice.

6 V. That if one, or more decisions of the written word of God, sanction the rectitude of any human acquisitions, for instance, the acquisition of a servant by inheritance or purchase, whoever believes that the written word of God is verity itself, must consequently believe in the absolute rectitude of To these propositions most Southerners could only say "Amen.". The first element of this biblical Defense of Slavery was the concept of divine decree, that is, through the curse of Cain God had decreed Slavery Before it had actually come into existence. Genesis 9:20-27 tells the story of Noah and Ham.

7 After the flood, Noah became a farmer and planted a vineyard, eventually getting drunk from the wine produced. While drunk, he also became naked within his tent and was seen by Ham who told his brothers, Shem and Japeth. The latter two backed into Noah's tent in order to cover him without being seen. When Noah awakened he knew what Ham had done, and pronounced the curse (Gen. 9:25-27) which was to become the standard explanation for the origin of Slavery . This particular proof of the divine sanction of Slavery was quoted extensively in the proslavery In 1823 Frederick Dalcho, a South Carolina Episcopal clergyman, wrote an elaborate explication on this portion of the Bible.

8 According to Dalcho, the inspiration for Noah's curse was divine because otherwise the "future condition 2. Richmond Enquirer, 15 February 1820. The biblical Defense of Slavery was commonly used throughout the Missouri controversy. For an elaborate Defense from the Missouri territorial newspapers, see Franklin (Mo.) Intelligencer, 18 February 1820. 3. For just a few of the examples, see [Frederick Dalcho], Practical Considerations Founded on the Scriptures, Relative to the Slave Population of South Carolina by a South-Carolinian (Charleston: A. E. Miller, 1823); Richard Furman, Exposition of the Views of the Baptists Relative to the Coloured Population in the United States, 2nd ed.

9 (Charleston: A. E. Miller, 1833); Congressional Debates, 20 Cong., 2d sess., 7 January 1829, pp. 184-85. Richmond Enquirer, 3 December 1819. 18 T H E JOURNAL OF Religious THOUGHT. of his idolatrous and wicked posterity" could not have been known by him. "The prophecy of Noah," Dalcho continued, "was to be fulfilled, not in the individuals named, but nationally in their descendants. Canaan's whole race was under the malediction." Thus the descendants of Canaan, the Africans, were to be the "servants of servants," or as Dalcho explained, "the lowest state of servitude, slaves," to the descendants of Shem and Japeth, the present day Jews and Christians.

10 The pamphlet then delineated the different parts of the world inhabited by Noah's sons to prove that the prophecy had indeed come Finally, Dalcho called upon the authority of Bishop Newton in his Dissertation on the Prophecies to explain this curse. Newton saw the curse of Noah, according to Dalcho, as "particularly implying servitude and subjection.'". Newton stated that the word "brethern" in Hebrew also meant more distant relations. "The descendants, therefore of Canaan, were to be subject to the descendants of both Shem and Japeth .. this is the burden of the prophecy." 5. An article in the Richmond Enquirer carried the consequence of Noah's curse even further. www.hebrew4christians.com The Complete Hebrew Vowel List Hebrew for Christians Mark Name Sound Hebrew Trans. Class Type a' Qamets “a” as in aqua #meq' a Long a; Patach “a” as in aqua xt;P; a Short 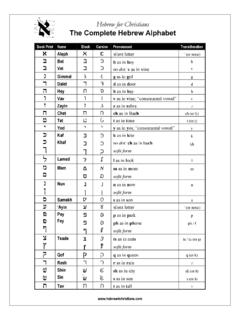 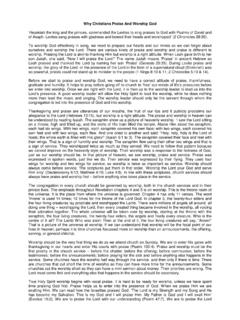 Why Christians Praise And Worship God

Why Christians Praise And Worship God ‘Hezekiah the king and the princes, commanded the Levites to sing praises to God with Psalms of David and

THE ORDER OF THE BOOKS IN THE HEBREW BIBLE …

MAGIC AND THE BIBLE - andrekoleministry.com

WIZARD: The root of this word comes from the Hebrew word to know, and implies knowledge available only to the specially initiated and not available to the ordinary person. 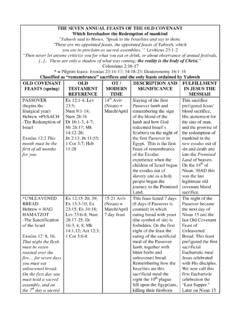 THE SEVEN ANNUAL FEASTS OF THE OLD …

THE SEVEN ANNUAL FEASTS OF THE OLD COVENANT Which foreshadow the Redemption of mankind "Yahweh said to Moses, ‘Speak to the Israelites and say to them:

Annual, Seven, The seven annual feasts of the, Feasts

Sacred Words? or Words about the Sacred? - … 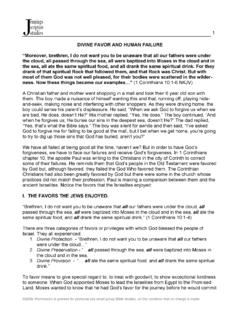 ©2009 -Permission is granted for personal use small group Bible studies, on the condition that no charge is made. 1 DIVINE FAVOR AND HUMAN FAILURE

Hebrew for Christians, Hebrew, Why Christians Praise And Worship God, MAGIC AND THE BIBLE, THE SEVEN ANNUAL FEASTS OF THE, Sacred Words, CRI/Voice, DIVINE FAVOR AND HUMAN FAILURE