3 All paper used is recycled as well as recyclable. All inks and coatings are vegetable-based products. The full catalogue of IDRC Books is available at V. TABLE OF CONTENTS. FOREWORD ..VII. SYNOPSIS ..XI. 1. THE POLICY The Intervention Dilemma ..1. The Changing International Environment ..3. The Implications for State Sovereignty ..7. The Meaning of 2. A NEW APPROACH: THE Responsibility TO PROTECT ..11. The Meaning of Sovereignty ..12. Human Rights, Human Security and Emerging Shifting the Terms of the Debate ..16. 3. THE Responsibility TO PREVENT ..19. A Commitment to Early Warning and Analysis ..21. Root Cause Prevention Efforts ..22. Direct Prevention Efforts ..23. 4. THE Responsibility TO REACT ..29. Measures Short of Military Action ..29. The Decision to Intervene ..31. Threshold Criteria: Just Other Precautionary Criteria.

4 35. 5. THE Responsibility TO REBUILD ..39. Post-Intervention Administration under UN Authority ..43. Local Ownership and the Limits to Occupation ..44. 6. THE QUESTION OF Sources of Authority under the UN Charter ..47. The Security Council's Role and Responsibility ..49. When the Security Council Fails to Act ..53. The Responsibility to Protect VI. 7. THE OPERATIONAL DIMENSION ..57. Preventive Operations ..57. Planning for Military Intervention ..58. Carrying Out Military Following Up Military Intervention ..64. A Doctrine For Human Protection Operations ..66. 8. THE Responsibility TO PROTECT: THE WAY From Analysis to Action ..69. Mobilizing Domestic Political Mobilizing International Political Will ..72. Next Steps ..73. Meeting the APPENDIX A: MEMBERS OF THE COMMISSION ..77.

5 APPENDIX B: HOW THE COMMISSION WORKED ..81. INDEX ..87. VII. foreword This report is about the so-called right of humanitarian intervention : the question of when, if ever, it is appropriate for states to take coercive and in particular military action, against another state for the purpose of protecting people at risk in that other state. At least until the horrifying events of 11 September 2001 brought to center stage the international response to terrorism, the issue of intervention for human protection purposes has been seen as one of the most controversial and difficult of all international relations questions. With the end of the Cold War, it became a live issue as never before. Many calls for intervention have been made over the last decade some of them answered and some of them ignored.

6 But there continues to be disagreement as to whether, if there is a right of intervention, how and when it should be exercised, and under whose authority. The Policy Challenge External military intervention for human protection purposes has been controversial both when it has happened as in Somalia, Bosnia and Kosovo and when it has failed to happen, as in Rwanda. For some the new activism has been a long overdue internationalization of the human conscience; for others it has been an alarming breach of an international state order dependent on the sovereignty of states and the inviolability of their territory. For some, again, the only real issue is ensuring that coercive interventions are effective; for others, questions about legality, process and the possible misuse of precedent loom much larger.

7 NATO's intervention in Kosovo in 1999 brought the controversy to its most intense head. Security Council members were divided; the legal justification for military action without new Security Council authority was asserted but largely unargued; the moral or humanitarian justification for the action, which on the face of it was much stronger, was clouded by allegations that the intervention generated more carnage than it averted; and there were many criticisms of the way in which the NATO allies conducted the operation. At the United Nations General Assembly in 1999, and again in 2000, Secretary-General Kofi Annan made compelling pleas to the international community to try to find, once and for all, a new consensus on how to approach these issues, to forge unity around the basic questions of principle and process involved.

8 He posed the central question starkly and directly: if humanitarian intervention is, indeed, an unacceptable assault on sovereignty, how should we respond to a Rwanda, to a Srebrenica to gross and systematic violations of human rights that affect every precept of our common humanity? It was in response to this challenge that the Government of Canada, together with a group of major foundations, announced at the General Assembly in September 2000 the estab- lishment of the International Commission on Intervention and State Sovereignty (ICISS). Our Commission was asked to wrestle with the whole range of questions legal, moral, operational and political rolled up in this debate, to consult with the widest possible range of opinion around the world, and to bring back a report that would help the Secretary-General and everyone else find some new common ground.

9 The Responsibility to Protect VIII. The Commission's Report The report which we now present has been unanimously agreed by the twelve Commissioners. Its central theme, reflected in the title, is The Responsibility to Protect , the idea that sovereign states have a Responsibility to protect their own citizens from avoid- able catastrophe from mass murder and rape, from starvation but that when they are unwilling or unable to do so, that Responsibility must be borne by the broader community of states. The nature and dimensions of that Responsibility are argued out, as are all the questions that must be answered about who should exercise it, under whose authority, and when, where and how. We hope very much that the report will break new ground in a way that helps generate a new international consensus on these issues.

10 It is desperately needed. As Co-Chairs we are indebted to our fellow Commissioners for the extraordinary qualities of knowledge, experience and judgement they brought to the preparation of this report over a long and gruelling year of meetings. The Commissioners brought many different personal views to the table, and the report on which we have agreed does not reflect in all respects the preferred views of any one of them. In particular, some of our members preferred a wider range of threshold criteria for military intervention than those proposed in our report, and others a narrower range. Again, some Commissioners preferred more, and others less, flexibility for military intervention outside the scope of Security Council approval. But the text on which we have found consensus does reflect the shared views of all Commissioners as to what is politically achievable in the world as we know it today. 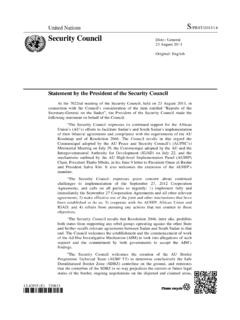 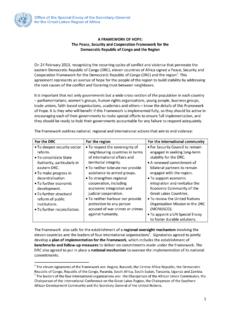 Office of the Special Envoy of the Secretary …

Office of the Special Envoy of the Secretary-General for the Great Lakes Region of Africa 3 Shared responsibility This time a different approach is needed. 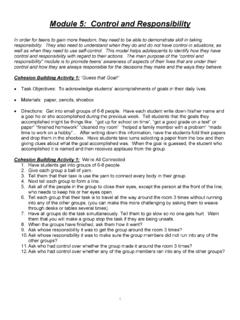 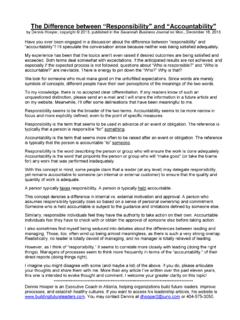 The Difference between “Responsibility” and … 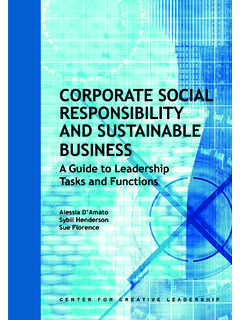 Are you prepared to implement Section 135 of the …

Corporate Social Responsibility Are you prepared to implement Section 135 of the Companies Act, 2013? 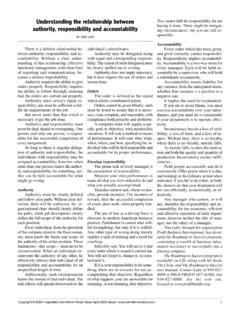 Understanding the relationship between authority ...

individual’s subordinates. Authority may be delegated along with equal and corresponding responsi-bility. The extent of such delegation must be clearly spelled out in writing.