The Role of Public Administration in Developing ...

2 VI. INFRASTRUCTURE AND THE ENVIRONMENT .. 91 - 110 20. VII. CONCLUSION .. 111 - 114 24. 95-19708 (E) 150795. *9519708* /.. /.. ST/ English Page 3. INTRODUCTION. 1. The present report is intended to introduce several key issues for Governments to consider as they develop new infrastructure policies and facilities that will be not only responsive to and sustainable in terms of the needs and expectations of their citizens but also sensitive to the protection of the environment. 2. As the twenty-first century approaches, Governments face a number of complex challenges as providers of infrastructural services. Among these are improved efficiency, increased reliability, cost-effective management, a growing dichotomy in urban/rural services and sustained economic growth.

3 3. Developing countries invest over $200 billion per year in new infrastructure, representing roughly 4 per cent of their national output and one fifth of their total investment. Over the past two decades, these investments have paid considerable dividends, such as a substantial increase in the proportion of households with access to clean water, and the per capita doubling of power production and telephone lines. However, 1 billion people in the Developing world still lack access to clean water and nearly 2 billion lack access to electric power lines. This report considers several vital areas that are important to the effective formulation of infrastructure policy and its relationship to sustainable development and the environment.

4 4. The first section considers the role of government itself. The origins, developments, and challenges of infrastructural activities are a direct result of, and an expedient response to, a society's primary need for services. How a Government's policies are influenced by past experiences and technological advances, impact on the environment, and contribute to economic growth are among the aspects considered in that section. 5. How Governments could improve responsiveness in the area of maintenance is evaluated in section II. What are the reasons for the current levels of attention or indifference? What is the degree of political commitment? What is the degree of local involvement?

5 What future options are suggested by current trends and future technologies and needs? 6. Government and the private sector have become significant and increasingly effective in recent years in areas of infrastructural financing , management and project development. Potential benefits and costs, investment opportunities, efficiency and responses for addressing environmental concerns are several of the key aspects considered in section III. 7. Governments are increasingly turning to foreign investment as a source of financing infrastructure. Some important issues raised in section IV include incentives for foreign capital investment; bilateral and multilateral responses.

6 Joint ventures; impact of technology; and environmental awareness. /.. ST/ English Page 4. 8. There are two principal sources for financing infrastructure activity - tax revenues and government borrowings. Section V considers the economics of alternative choices and funding decisions. The advantages and limitations of the current choices, market competition, the deficiencies and advancements of budgetary allocations, financing and pricing methods, and instruments for resource mobilization are among the several topics considered. 9. The new and complex problems that have resulted from the extensive and rapid growth of metropolitan populations and the increasing number of large cities have impacted both on infrastructure and on the environment.

7 Recognizing problems and their causes, defining environmental impacts and setting priorities, preserving the environment through improved infrastructure, and formulating an urban environmental management strategy are all considered in section VI. 10. Likewise, there are persistent problems of infrastructure in rural areas. These problems concern, inter alia, feeder roads, for improved marketing of products; clean and accessible water; rural electrification; and greater involvement and improved coordination at the local level. Sustainability of infrastructure demands that appropriate attention be paid to efficient use and maintenance of existing capacity, far-sighted planning, integration of new technologies, adequate emphasis on environmental concerns, and responsiveness to users, both urban and rural.

8 I. ROLE OF GOVERNMENT AND INFRASTRUCTURE. Origins of the role of the Public sector 11. Historically, the combination of a society's primary need for services and its technological potential has been the fundamental catalyst for the formation and execution of large-scale physical works projects. Effective and enduring investments in transportation, telecommunications, and sanitation continue to be a basic measurement of societal development, and Public sector efficacy. 12. Advancements in infrastructure have often been a linear response to advancements made in technology. One needs only think about changes from copper wire electronic transmission to fibre optics to appreciate the role of technology.

9 Today, modern service sectors have benefited substantially from the technology-driven "infrastructure revolution". 13. As a commanding Public interest, infrastructure can also be characterized as an emerging Public trust. Traditionally, Governments have appropriated all aspects of infrastructure. This is particularly true in Developing countries. Throughout the first half of the twentieth century, for many industrialized countries private participation had been essential; but the trend from the late 1940s until the 1980s was overwhelmingly towards government or parastatal provision. /.. ST/ English Page 5. 14. There are a number of reasons for this dominant Public sector role in infrastructure development: recognition of its economic and political importance; a belief that problems with technology required a highly activist response by Governments; an expectation that Governments could perform where private markets could not.

10 Yet after years of progress in infrastructure expansion under Public leadership, recent experiences have often revealed a chronic misallocation of resources and a repeated failure to respond to demand. Public leadership involving ownership, financing and/or operation has seldom demonstrated any advantage over private sector involvement in poverty reduction or environmental protection. 15. Despite these deficiencies, achievements in infrastructure expansion in the last 20 years have been impressive. Evidence available shows that between 1975. and 1990, countries with low-income economies, and virtually no technological and resource base, have registered the greatest increase in telecommunications, sanitation, and water-supply services. 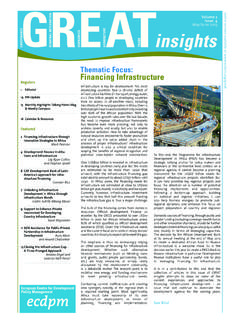 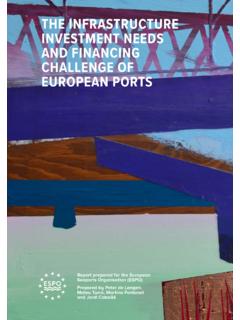 THE INFRASTRUCTURE INVESTMENT NEEDS AND …

message from the chair i espo recommendations ii study: the infrastructure investment needs and financing challenge of european ports introduction 3 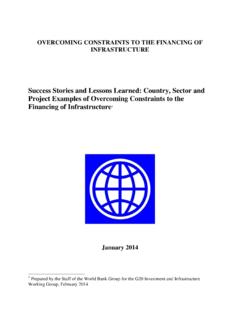 OVERCOMING CONSTRAINTS TO THE FINANCING OF INFRASTRUCTURE Success Stories and Lessons Learned: Country, Sector and Project Examples of Overcoming Constraints to the 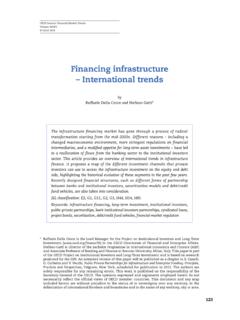 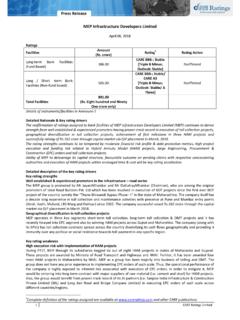 An introduction to market-based instruments for ...