The Senses of Scripture by Pauline A. Viviano, PhD. T. he Church has a rich tradition of interpreting Sacred alone can any argument be drawn, and not from those Scripture . That tradition had begun already in the intended in allegory. 4 This importance was reiterated in New Testament, as the Old Testament was inter- Pope Pius XII's exhortation to Catholic biblical scholars: preted in relationship to Christ, and it was further devel- let the Catholic exegete undertake the task, of all those oped by the early Church Fathers and systematized in the imposed on him the greatest, that namely of discovering medieval period.

The Senses of Scripture by Pauline A. Viviano, PhD 1 T he Church has a rich tradition of interpreting Sacred Scripture. That tradition had begun already in the

Senses, Scripture, The senses of scripture

1 The Senses of Scripture by Pauline A. Viviano, PhD. T. he Church has a rich tradition of interpreting Sacred alone can any argument be drawn, and not from those Scripture . That tradition had begun already in the intended in allegory. 4 This importance was reiterated in New Testament, as the Old Testament was inter- Pope Pius XII's exhortation to Catholic biblical scholars: preted in relationship to Christ, and it was further devel- let the Catholic exegete undertake the task, of all those oped by the early Church Fathers and systematized in the imposed on him the greatest, that namely of discovering medieval period.

2 Though modern and contemporary biblical and expounding the genuine meaning of the Sacred Books. scholarship both have adopted new means and new aids to In the performance of this task let the interpreters bear in exegesis 1 as encouraged by Pope Pius XII, the foundation mind that their foremost and greatest endeavor should be laid by the early Church Fathers and the medieval Church to discern and define clearly that sense of the biblical words continues to support subsequent inquiries into the mean- which is called literal.

3 5. ing of the biblical text. The early Church Fathers were not bound to one meaning of the text but rather allowed the The spiritual sense refers to when what is signified by biblical text to speak its message in various ways. These the words of a text, the literal sense, also has a further various ways correspond to the levels of meaning in a text; As it developed within Christianity, the these levels of meaning we call the Senses of Scripture . spiritual sense pertained to the meaning expressed by the biblical texts when read under the influence of the Holy There are two basic Senses of Scripture : the literal sense and Spirit, in the context of the paschal mystery of Christ and the spiritual sense.

4 The literal sense refers to the sense of of the new life which flows from it. 7 Spiritual interpretation the words themselves; it is that which has been expressed of the Old Testament was especially prominent for the directly by the inspired human authors. 2 It has been Church Fathers, for the Old Testament was believed to variously described as the verbal or grammatical sense, the contain God's preparation for his Son. The early Church plain sense, the sense the human author intended, the sense Fathers used many terms to refer to the spiritual meaning the divine author intended, the historical sense, and even of the text, such as allegorical sense, mystery or mystical the obvious sense.

5 Underlying these various descriptions is sense, and The lines between these various terms the notion that the literal sense is the meaning conveyed are blurred, and their meanings often overlap. Indeed, at by the words of Scripture . 3 The literal sense is discovered times these terms were used interchangeably by the early by careful and attentive study of the biblical text using Church Fathers. all interpretive tools available, such as grammatical aids, archaeological evidence, historical and literary analyses, By the medieval period, three distinct spiritual Senses sociological and anthropological studies, and whatever emerged: the allegorical sense (which included typology), else can be called upon to expand one's knowledge of the the tropological or moral sense, and the anagogic or historical and literary context of the text and thereby gain a future sense.

7 135. Resource (Chicago: Liturgy Training Publications, 2001), 22. 8 From Raymond Brown, The Sensus Plenior of Sacred Scripture 2 Pontifical Biblical Commission, The Interpretation of the Bible in the (Baltimore, MD: St. Mary's University, 1955), 46: Sometimes theoria Church (1993), no. 131, in The Bible Documents, 162. is used in the same sense as allegory, but in the Antiochene school 3 Catechism of the Catholic Church (2nd ed.) (Washington, DC: it specifically refers to the perception of the future which a prophet Libreria Editrice Vaticana United States Conference of Catholic enjoys through the medium of the present circumstances which he is Bishops, 2000), no.

8 116. describing.. 1. The allegorical sense refers to the meaning that is hidden the Jerusalem above is freeborn, and she is our beneath the surface of the text. The search for the mother. (Gal 4:22-26). allegorical meaning of texts finds its origin in the Greek world, especially in Platonic philosophy as it was understood The allegorical method of interpretation dominated in the in the Hellenistic period. Allegorical interpretation was early Church from the time of Clement of Alexandria (150. employed to make sense of the Greek myths in which the to 211/215 CE) through the fourth century.

9 Origen, living gods often appeared crude and their behavior immoral. in the 3rd century CE, is perhaps the greatest representative Underlying the allegorical method is the notion that the of this kind of interpretation. writers of an earlier age composed their works in a veiled language. They wrote one thing but intended another. Though today scholars make a distinction between In order to hold on to the stories of old, and yet to allow allegorical and typological interpretation, such a distinction these stories to speak to a new age, it is necessary to find was not made in the early Church.

10 The early Church a meaning beyond what the written word said. In order Fathers spoke of types, but they did not distinguish to uncover the true meaning of those ancient myths, it is between allegory and typology as scholars have recently necessary to treat the written word as a symbol for a deeper begun to do. What is distinctive to typology is the notion reality; it is necessary to find a deeper meaning below that what preceded Christ was but a shadow of what the surface or literal meaning of the text. By means of was to come. 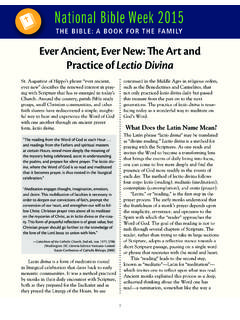 1 St. Augustine of Hippo’s phrase “ever ancient, ever new” describes the renewed interest in pray-ing with Scripture that has re-emerged in today’s

Book: The Catholic Understanding of the Bible

1997 Inter Mirifica No reproductions shall be made without prior written permission 1 THE CATHOLIC UNDERSTANDING OF THE BIBLE John A. Hardon, S.J.

4 Personal note: I am indebted to Fr. Christopher Pollard (Parochial Vicar at St. John the Baptist Catholic Church 2007-09) for the original inspiration of this workbook. 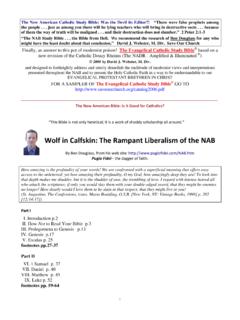 Wolf in Calfskin: The Rampant Liberalism of the NAB 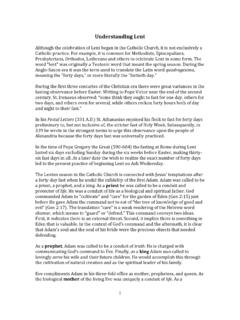 1 Understanding Lent Although the celebration of Lent began in the Catholic Church, it is not exclusively a Catholic practice. For example, it is … 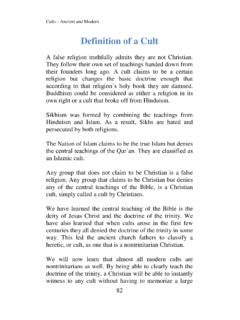 Definition of a Cult - Biblefacts.org

Definition of a Cult 83 number of cultic teachings. There are 158 different denominations grouped in twenty major movements. Here is a list of …

Definition, Cult, Definition of a cult

3 A Treasury of Common Prayers The Sign of the Cross In the name of the Father and of the Son and of the Holy Spirit. Amen. The Lord’s Prayer