The Sermon on the Mount: A Reformed Exposition …

The Sermon on the mount : A Reformed Exposition chapter 33: The Narrow Gate Brian Schwertley Enter ye in at the strait gate: for wide is the gate, and broad is the way, that leadeth to destruction, and many there be which go in thereat: Because strait is the gate, and narrow is the way, which leadeth unto life, and few there be that find it (Mt. 7:13-14). After completing the main body of His Sermon , Jesus turns His attention toward applying what He has said to His audience. No more ethical teaching will be given for, from this point on, Christ will be warning His hearers about the absolute necessity of embracing Him and living the life of discipleship.

The Sermon on the Mount: A Reformed Exposition Chapter 33: The Narrow Gate Brian Schwertley Enter ye in at the strait gate: for wide is the gate, and broad is …

1 The Sermon on the mount : A Reformed Exposition chapter 33: The Narrow Gate Brian Schwertley Enter ye in at the strait gate: for wide is the gate, and broad is the way, that leadeth to destruction, and many there be which go in thereat: Because strait is the gate, and narrow is the way, which leadeth unto life, and few there be that find it (Mt. 7:13-14). After completing the main body of His Sermon , Jesus turns His attention toward applying what He has said to His audience. No more ethical teaching will be given for, from this point on, Christ will be warning His hearers about the absolute necessity of embracing Him and living the life of discipleship.

2 The Sermon on the mount is not meant simply to be admired, but obeyed. In essence, our Lord is saying, Now that you know the true character of the kingdom I am bringing into this world; the differences between what God requires you to believe and be, versus the corrupt, unbiblical, popular religion of today and the strict requirements of discipleship for My true followers, come to Me at once, embrace what I have said, separate yourself from the crowd and follow the narrow path of discipleship and genuine sanctification. There is a sense in which this is the most important imperative of the whole Sermon , for if the narrow gate is not entered, all is lost.

3 People's entire lives would be full of vanity, foolishness, wickedness and lies, lived on a highway to hell. By way of introduction there are a number of things to note regarding this passage. First, the imperative of verse 13, enter by the narrow gate, is the central proposition or main point of this whole final section. All the warnings which follow are designed to reinforce this command. There is the warning of the wide gate and broad way which leads to destruction. There is a warning about false profession. There are people who claim to be Christians that are antinomian.

4 They are also on the broad path, but do not know it; they will be excluded from heaven by Christ Himself. Then, finally, there is a parable about two builders. The one heeded our Lord's words and thus he could withstand the storms of life. He persevered on the narrow road and was victorious. The other man's building or life was destroyed because he listened but did not obey. He didn't enter the narrow gate or live on the narrow way. One cannot help but notice the brilliance of Christ's preaching; His application is penetrating and multi-faceted.

5 The Sermon on the mount demands decisive action on the part of every listener. Enter by the narrow gate.. Second, note that Jesus only speaks of two gates, two ways, two kinds of travelers and two final destinations. There are many people who view these two alternatives as descriptive of two paths with one containing all sincere, devout, religious people whether Christians, Buddhists, Muslims, Jews, and the other containing only gross, irreligious, debauched sinners. That is, people who are leading a very lawless, disgusting lifestyle ( , whores, drunks, drug addicts, child molesters, murderers, ).

6 This is a false and dangerous perversion of this passage. We need to keep in mind that our Lord is preaching to a large multitude of religious Jews. Many Jews were very devout and very sincere about their beliefs, yet rejected Jesus Christ and attempted to establish their own righteousness before God by keeping the law. These people were proud and self-sufficient. Our Lord includes these people along with the scribes and Pharisees on the broad path that leads to destruction. It is important that we recognize that the broad gate and wide way contains all people, no matter what race or religion, who have not embraced Christ as Savior and Lord and who are not following Him as faithful disciples.

7 Therefore, the Savior is plainly teaching that ultimately there are only two kinds of religions or philosophies in this world: the true or false. Consequently, if we profess Christ we need to examine ourselves in light of our Lord's teaching in order to see if we have really entered the narrow gate and are truly walking in the narrow way. Those who are not followers of the Redeemer must recognize the terrible horrifying place they are in and thus strive to enter through the narrow gate (Lk. 13:24). Third, one thing that is striking about these verses is the fact that they are so completely contrary to the common modern evangelical method of presenting the gospel.

8 The typical pastor today will say things such as: Simply accept Jesus as your personal Savior ; or, Just walk the aisle, pray the prayer and know that you are saved. Don't ever doubt it ; or, Becoming a Christian is the easiest thing in the world and being a Christian will solve all your problems. Isn't it time to enter a life of prosperity and blessing? Under the degrading, poisonous influence of heretical Arminian doctrine and semi-Pelagian revivalism, gospel preaching has often been transformed into a slick sales pitch where everything is easy, positive and exciting.

9 Christ, however, goes out of His way to present the complete picture of the Christian life and at the outset tells men to count the cost of discipleship. This is because our Lord does not simply focus on the one act of believing, but also on the whole life of struggle, tribulation and self-sacrifice that living a faithful Christian life entails. The Redeemer does not appeal to men's flesh or attempt to draw men who are proud, thoughtless and selfish. He does not want a church full of hypocrites. Indeed, the whole Sermon has been directed against hypocrisy, pride and a complacent spirit.

10 Rather, He is appealing to those who have been convicted by the Holy Spirit, are poor in spirit and mourn over their sins (Mt. 5:3-4). While it is certainly true that we are justified solely by the sacrificial death of Christ and the imputation of His righteousness (Ac. 13:39; Rom. 3:20-24, 28; 4:3-8; Gal. 2:16; Phil. 3:8-9;. Eph. 2:8-9) which is apprehended by faith alone; nevertheless, we are called to a life of self- denial in which we must take up our cross and continually follow Jesus (Mt. 16:24). In His presentation of what is necessary for Christian discipleship, He sets before our eyes the lifelong warfare involved in progressive sanctification.

God's Law for Modern Man Brian Schwertley Introduction The biblical teaching regarding God’s law has been perverted and neglected by many churches during the twentieth century. 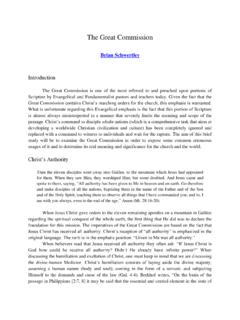 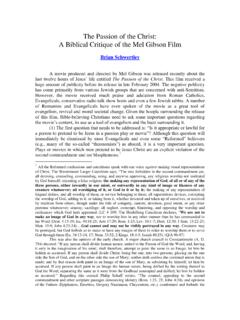 The Passion of the Christ - Reformed Online

The Passion of the Christ: A Biblical Critique of the Mel Gibson Film Brian Schwertley A movie produced and directed by Mel Gibson was released recently about the

Christ, Passion, The passion of the christ The Incarnation of Christ - Reformed Online

The Incarnation of Christ Brian Schwertley Introduction When we speak of Christianity or the gospel we must not only examine and understand what Jesus did, but also who He was and is.

Christ, Incarnation, The incarnation of christ 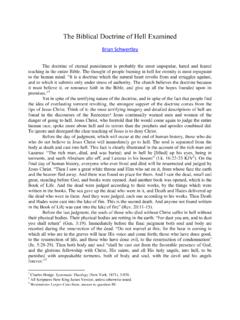 The Biblical Doctrine of Hell Examined Brian Schwertley The doctrine of eternal punishment is probably the most unpopular, hated and feared teaching in the entire Bible. The thought of people burning in hell for eternity is most repugnant to the human mind. “It is a doctrine which the natural heart revolts from and struggles against, 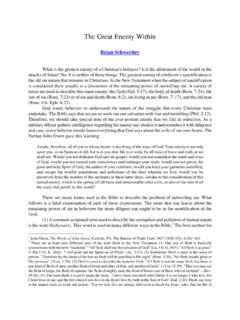 The Great Enemy Within - Reformed Online

The Great Enemy Within ... Is it the allurement of the world or the attacks of Satan? No. It is neither of these things. The greatest enemy of a believer's sanctification is the old sin nature that remains in Christians. In the New Testament when the subject of sanctification ... The Bible says that we are to work out our salvation with fear ...

Within, Santa, Great, Enemy, The great enemy within 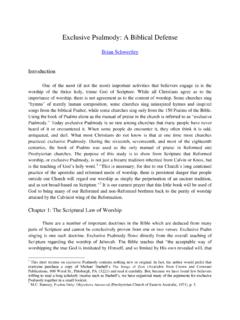 Exclusive Psalmody: A Biblical Defense Brian Schwertley Introduction One of the most (if not the most) important activities that believers engage in is the 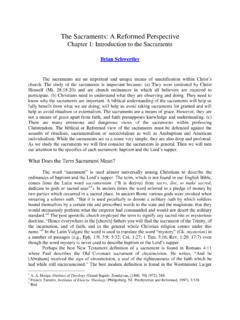 The Sacraments: A Reformed Perspective Chapter 1 ...

Christ, and the benefits of the covenant of grace, are represented, sealed, and applied to believers, and these in turn, give expression to their faith and allegiance to God.” 4 The Word of God and the Sacraments as Means of Grace 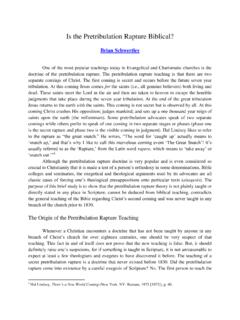 Is the Pretribulation Rapture Biblical? 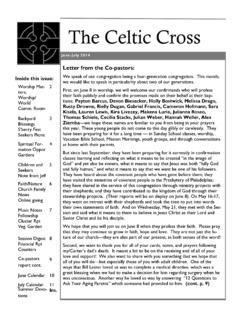 The Celtic Cross Letter from the Co-pastors: We speak of our congregation being a four-generation congregation. This month, we would like to … 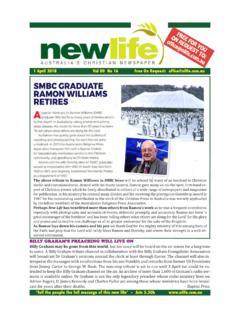 The above tribute to Ramon Williams in SMBC News

NEW LIFE – 1 April 2018 – Page Three ‘THEY CAME WEARY, AND REFRESHED THEMSELVES THERE’ Conferences and conventions play an important role in the life and work of the Chris‐ 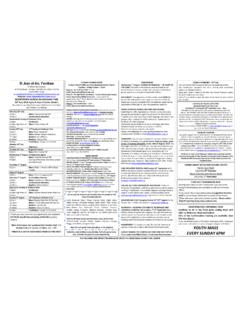