The Significance of Pragmatics in English …

ELT Voices - India' International Journal for Teachers of English Volume 5, Issue 1, 19-24 (2015). ISSN: 2230-9136. ( ). The Significance of Pragmatics in English Language Teaching Amin Alinezhad Research scholar, Department of Studies in Linguistics, KIKS, University of Mysore, Manasagangothri, Mysore -06, India Corresponding email address Article reference: Alinezhad, A. (2015). The Significance of Prag mat ics in English Language Teaching. ELT Voice - India, Volume, 5 (1), 19-24. Abstract: This paper demonstrates that Pragmatics should be viewed as a branch of linguistics and its significant role in English as a second language. In Pragmatics , meaning in co mmun ication has an important role and it can be categorized into two elements such as verbal and nonverbal.

20 Alinezhad(2015). The Significance of Pragmatics in English Language Teaching. 1. Introduction As Held et al., (1999) mention “Globalization may be thought of initially as the widening, deepening and speeding up of

English, Pragmatic, Significance, The significance of pragmatics in english

1 ELT Voices - India' International Journal for Teachers of English Volume 5, Issue 1, 19-24 (2015). ISSN: 2230-9136. ( ). The Significance of Pragmatics in English Language Teaching Amin Alinezhad Research scholar, Department of Studies in Linguistics, KIKS, University of Mysore, Manasagangothri, Mysore -06, India Corresponding email address Article reference: Alinezhad, A. (2015). The Significance of Prag mat ics in English Language Teaching. ELT Voice - India, Volume, 5 (1), 19-24. Abstract: This paper demonstrates that Pragmatics should be viewed as a branch of linguistics and its significant role in English as a second language. In Pragmatics , meaning in co mmun ication has an important role and it can be categorized into two elements such as verbal and nonverbal.

2 It depends on various contexts, relat ionship between utterers, and social factors. Nowadays English plays a key role in the world and it is known as an international language which enables people to connect all around the world and English can be called as a global language because it is helpful in the processes of globalization. As English has played an indispensable role in g lobal co mmunication, it is essential for English language users, both native and non-native, to use clear, comp rehensible and educated English that allows s mooth commun ication and avoids misunde r- standings in social interactions. Hence, pragmat ic competence can facilitate language users to successfully achieve their communicat ive aims in intercultural co mmunicat ion.

3 Consequently, prag matic elements have noticeable roles in co mmuni- cation between speakers because such elements can hinder inaccuracies and misunderstandings during communication. Teachers should teach pragmatic competence in second language English classes through different activities and tasks. Index Terms: Pragmatics , Pragmatics competence, English language teaching, language comp etencies. 20 Alinezhad (2015). The Significance of Pragmatics in English Language Teaching. 1. Introduction As Held et al., (1999) mention Globalization may be thought of initially as the widening, deepening and speeding up of world wide interconnectedness in all aspects of contemporary social life and it is an inevitable process. Crystal (1997) be- lieves that English becomes a tru ly global language since t hen it has kept its privileged position among other world lan- guages towards the end of the 20th century.

4 It is estimated that about billion people all over the world speak English . According to Kachru's terminology, the Inner Circle countries are the first and majority group language, the Outer Circle countries such as India, Pakistan, Singapore, and Nigeria use English as a second language together with other languages as a means of intranational co mmunication, the Expanding Circle covers an unspecifie d nu mber of countries wh ich employ English as a foreign language in schools (Kachru & Nelson, 2001). As Wardhaugh (1987) co mments that What is remarkab le about English and what makes it unique is the extent to which it has spread throughout the world. No other language has ever had the influence in wo rld affairs that English has today. As Richards (2001) states that English is no longer viewed as the property of the English -speaking world but it is an interna- tional commodity sometimes referred to as English an International Language.

5 2. Pragmatics definitions Prag matics can be defined fro m different views in different ways. As indicated by Roever (2010), in applied linguistics, Prag matics research is mostly concerned with the interrelat ionship between language use and the social and interpersonal context of interaction. Morris (1938) recommends the modern usage of pragmat ics firstly. He defines the term prag mat ics as the study of the relation of signs to interpreters , whereas he defines syntax as the formal relation of signs to one an- other and semantics as the relation of signs to the objects to which the signs are applicable. He provides the scope of Pragmatics in accordance with h is particular behavioristic theory of semiotics . According to Levinson (1983), It is a suffi- ciently accurate characterization of prag matics to say that it deals with the biotic aspects of semiosis, that is, with all the psychological, b iological, and sociological phenomena which occur in the functioning of signs.

6 Trosborg (1995) proposes that Pragmatics can be known as a branch of semiotics dealing with the relation between signs of linguistic expressions and those who use them; it is one of a b ranch of linguistics which deals with the contexts people use language and the behavior of the speakers and listeners. The uses of Pragmatics are to analyze linguistic words in people's communication and to in- terrupt what people mean in a particular context and how the context influences what is said. It examines how speakers organize what they want to say in accordance with who they are talking to, when, where, and under what circu mstances (Yule, 1996). Crystal (1997) believes prag matics as the study of language fro m the point of v iew of users, especially of the choices they make, the cons traints they encounter in using language in social interaction and the effects their use of lan- guage has on their participants in the act of co mmunicat ion.

9 Organizat ional co mpetence relates to a speakers' control of the formal as- pects of language and is further subdivided into grammatical competence (vocabulary, syntax, mo rphology, phonology), and textual co mpetence (cohesion/coherence, rhetorical organization). As noted by Niezgoda & Rover (2011), Prag matic competence is classified into sociolinguistic and illocutionary competence. 4. pragmatic competence As mentioned by Thomas (1995), Prag matic co mpetence means the ability to use language in socially appropriate ways and to interpret both imp licit and exp lic it meaning according to context. Since the mid-1970s, the general purpose of language teaching and assessment concentrates on developing learners' communicative competence, knowledge of the Pragmatics and linguistics aspects of language use to enable students to become proficient in the target la nguage.

10 Taguchi (2003) men- tions that pragmatic knowledge deals with language use in relation to language users and language use settings. Leech (1983) and Tho mas (1983) suggest that Pragmatics is classified into two co mponents: p rag malinguistics and socioprag- mat ics. Prag malinguistics deals with pragmatic strategies such as the use of semantic formu lae, routines, and linguistic forms that can serve the purpose of making the co mmun icative act mo re direct or indirect, softer or mo re intensified. Soc i- opragmatics relates to social behavior, and the way speakers in a certain commun ity interpret and accomplish a commun i- cative act. As indicated by Leech (1983), prag malinguistics refers to the linguistic/grammat ical aspects of a language, while sociopragmatics is driven more towards the socio-cultural end of Pragmatics . 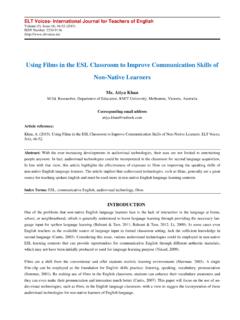 Using Films in the ESL Classroom to Improve Communication ...

48 Khan (2015) THE USE OF FILMS IN ESL LEARNING There is a general agreement among foreign/second language instructors that other than textbooks, audiovisual technolo- 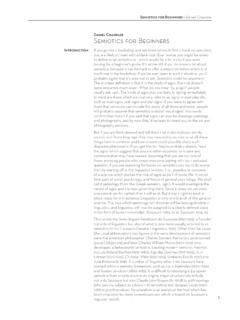 Daniel Chandler Semiotics for Beginners - The … 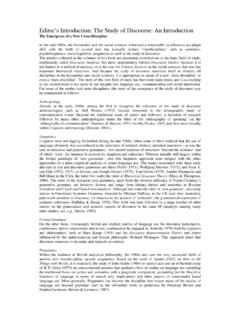 The study of discourse - Discourse in Society

Semiotics Within the study of literature and the arts, the mid-1960s also witnessed the emergence of semiotics, the general study of signs and symbol systems.

59 3.2 Model 1 – meaning in the words: language and semiotics 3.2.1 The signs specialists: Saussure and Pierce The early work on … 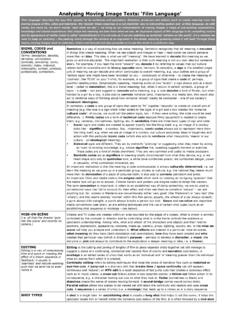 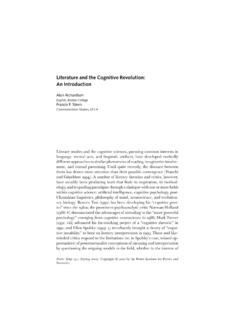 Literature and the Cognitive Revolution: An …

Richardson and Steen • Literature and the Cognitive Revolution: An Introduction 3 contextualiststudiesoftheliterarypast.Contemporarytheoriesoflitera-tureandculture,inourview,havemaderemarkableprogressindemysti-

15 Methods of Data Analysis in Qualitative Research Compiled by Donald Ratcliff 1. Typology - a classification system, taken from patterns, themes, or other kinds of 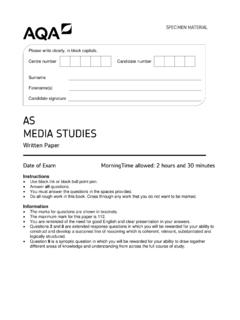 The following statements include four examples of semiotic terms being applied correctly to the Vanity Fair cover (Figure 1).