TIPS FOR TRAINERS 135 Tips for trainers The Snowball by MIKE McCALL, HOLLY ASHLEY and GIACOMO RAMBALDI Introduction One important element at the Mapping for Change conference was

2 Morning's discussions. On each of the three conference days, Day 3 Topic 3: Implementation issues (best practice) and ways forward participants were able to choose an afternoon session they wanted to Working group 1: Land and Working groups 2 and 3: Working group 4: attend. resources rights and Participatory land use Networking and entitlement. planning (PLUP), communication. During these sessions collaborative natural participants focused on different resource management aspects of the day's overall topic. (NRM). The working groups responded to specific framework questions, which The conference organisers had participants are also asked to give set the scene. On the first and chosen a single method for this, the reasons for their responses. second days, delegates were divided called the Snowball . The facilitator then asks a into three groups; on the third day, representative from each group to they were divided into four groups. Snowballing present the outcomes of their Afterwards, all the working groups Snowballing (or pyramiding) debate to the other groups, by reconvened in a final plenary session involves participants working first placing their findings (one each on to present the summaries of their alone, then in pairs, then in groups separate pieces of paper or card.)

3 Discussions (Table 1). of four, and then in groups of eight. meta-cards) on large sheets of But with over 160 participants, The participants work on an paper, put up on the walls. the working groups were large. issue by responding to particular At the conference sessions, two There were only 90 minutes in which questions, lists of keywords, or people facilitated each session and a to discuss complex issues. So a answers to a valued question, or note-taker was chosen to write up simple and effective tool was needed they are asked to agree or disagree the findings at the end, to present at to facilitate the discussions. with a given phrase. The the closing plenary session each day. 135. Tips for trainers Martin Sekeleti from Zambia and Participants Rahab Njoroge from discuss and IIRR collating cards sort cards on the wall TIPS FOR TRAINERS. Photos: Mike McCall Method partner. They may reach a consensus Time need: five to ten minutes. 1. The facilitator opens the session by agreement on the responses.

4 If not, 5. Next, the groups sort out the cards introducing a specific question or they should be clear about what are on the floor, showing the issues they questions for discussion. For their differences, and why. Using A5 have identified. As before, the cards example, on Day 1, each working meta-cards, the pairs write down can be easily mixed and sorted and group was asked to consider the their thoughts for example, re-organised etc. into sets or groups following question: funding, training, etc. Not more than of types of response. Use new cards In your experience and two to five words per card if possible. to make main headings for each knowledge, what internal and Time need: five to ten minutes. group of answers. Participants do external factors and conditions 3. Pairs join together into groups of this themselves, with help from the influence PGIS practice? four. All meta-cards are put on the facilitator. This stage is not easy . These are already written on large floor in the middle of a circle.

5 Cards sorting the cards into logical but sheets of paper pinned to the wall or are grouped and re-written if distinct groups or sets with projected onto a screen. The necessary to capture similar content. appropriate headings (names). question should be as clear and Repeat the same process as for step requires organisational, conceptual unambiguous as possible. 2. This new group shares its thoughts and verbal skills. Participants begin individually, by and reflections and any new ideas Time need: ten to fifteen minutes. writing down her or his individual each pair has brought to the group. 6. When everyone is agreed on the responses (to discuss it later with a Time need: five to ten minutes. responses and the grouping of the partner). You can write on meta- 4. Groups of four may join together responses, the facilitator asks a cards, or you can use a notebook. into group of eight, and repeat the representative from each group to Time needed: keep it brief three process, or until the session has stick the cards on to the wall (with to five minutes depending on the reached critical mass' there are masking tape, pins, etc.)

6 , so that length and complexity of the only a few main groups left. But everyone can see them. The question, and on the age and eight people is a big group and may representative explains the group's experience of the participants. not be suitable for easy discussions, reasons for the responses. 2. Participants join together in pairs although at the conference groups Time need: five to ten minutes and discuss their responses with their were as big as 16 people. per group. 136. Tips for trainers Participants Peter Minang, Robert Chambers and Peter Kyem collectively re-organise the cards on the floor into headings. questions could have been developed TIPS FOR TRAINERS. in a participatory way. What the participants thought of the working group sessions . I learnt more from the parallel workshop sessions than from the plenary sessions (except of course from key-speakers). I regret the workshops were divided in four parallels tracks. I think two would have be enough with a better pre- selection of the communications for the plenary session.

7 All the participants contributed very well especially in working group sessions. We learnt a lot from others, and made contacts. Needed more time dedicated to question periods and presentations. Perhaps re-thinking the workshop activities they were too include a period for focus groups of similar backgrounds NGO groups, aboriginal groups, governments, academia, This would bring those with similar ideas together to 7. At this stage, and if there is time Full involvement everyone is brainstorm. It would focus the or it is felt appropriate, the groups involved in the first three rounds of discussion during the workshop can collectively re-organise the cards single, pairs, and probably the activities. on the wall into headings/types of foursomes. The level of participation, response, as done in step 6. It is more inclusive and exchange and communication among Time need: ten to fifteen minutes. participatory than a plenary participants was very high and 8. The note-taker then writes up the meeting, a general discussion, or a contributed to a learning process to session findings, ready to present at question and answer session.

8 Many if not all participants. I did find the closing plenary session. An easy Shy participants feel more it unfortunate on some occasions way to record the results is to take a confident about giving their views in though, that I missed some digital photo of the cards on the pairs or in small group because they interesting presentations in other wall. must begin with writing down their working groups while participating in own response. There is limited eye another one. Advantages contact, as cards are grouped on the The sessions were well planned, This tool allows for easy floor and the focus of discussion is and the smaller workshops gave one comparison between the findings of centred on them. the opportunity to debate about each group. It is focused on an issue and things with other attendees. If used in subsequent parallel questions of interest (at least to the The methods adopted for group working group sessions, the organisers and facilitator). discussions allowed for all of us to participants are already familiar with The original questions come from participate and share our views on the tool. 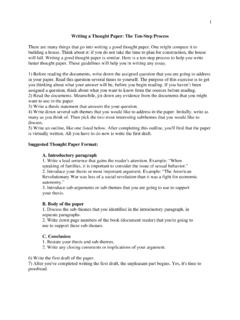 1 Writing a Thought Paper: The Ten-Step Process There are many things that go into writing a good thought paper. One might compare it to building a house.

GUIDELINE FOR TEACHING AND WRITING ESSAYS AND ...

4 . 1. INTRODUCTION . The purpose of this guideline is to briefly guide teachers and learners on the aspects of writing and resentingp . Furthermore, the guideline presents and shares information with 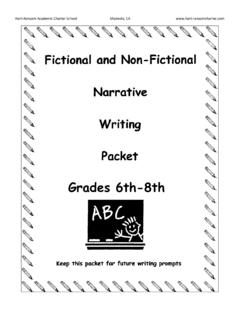 Hart-Ransom Academic Charter School Modesto, CA www.hart-ransomcharter.com Writing a Fictional Narrative (A made up story) Introduce the Story: Grab your reader's attention Use a general time reference (Last week my life was a simple routine of school, gymnastics and

10 DESCRIBING ME Self-Awareness: Chapter 1 Lesson 1 From the list that you and your classmates have made, choose ten words that best describe you. 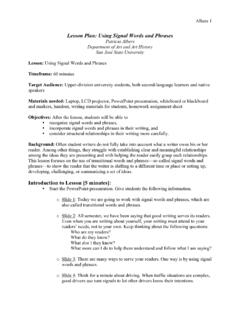