THE SOUTH AFRICAN army . The SA army 's mandate centres on the provisioning of combat-ready forces and the leading role it has to play in the development of the army component of the landward defence capability. The SA army , its members one in spirit, has the commanding presence and the power of a pride of lions, forever professional and ready, making a difference in serving SOUTH Africa, no matter where and under what circumstances. TRAINING OPPORTUNITIES IN THE SOUTH AFRICAN army . MILITARY SKILLS DEVELOPMENT (MSD) PROGRAMME. The MSD programme is a two-year voluntary service system with the long-term goal of enhancing the SA National Defence Force's deployment capability.

1 THE SOUTH AFRICAN army . The SA army 's mandate centres on the provisioning of combat-ready forces and the leading role it has to play in the development of the army component of the landward defence capability. The SA army , its members one in spirit, has the commanding presence and the power of a pride of lions, forever professional and ready, making a difference in serving SOUTH Africa, no matter where and under what circumstances. TRAINING OPPORTUNITIES IN THE SOUTH AFRICAN army . MILITARY SKILLS DEVELOPMENT (MSD) PROGRAMME. The MSD programme is a two-year voluntary service system with the long-term goal of enhancing the SA National Defence Force's deployment capability.

2 Recruits are required to sign up for a period of two years, during which they will receive military training and further functional training in their first year of service. During the second year of service, depending on the duration of their functional orientation, they will be deployed where needed and given the opportunity to apply their knowledge and develop their skills. This MSD programme serves as an introduction to the military way of life for all members who are joining the SA army for the first time. Towards the end of the second year, the member will be offered the opportunity for further service in the SA army or leave the army .

3 The opportunity for further service will mainly depend on the member's performance over the two years and the availability of posts in the relevant functional field and whether or not he or she has been recommended for further service. Members who are not recommended for, or who are not interested in continuing with their service in the Regular Force, will be required to serve in the Reserve Force after completion of the initial two-year period. This entails 30 days service per annum over a 5 year period. REQUIREMENTS. SOUTH AFRICAN citizen Age between 18 and 22 (Graduates up to the age of 26). Currently in Grade 12 or completed Not area bound No record of a criminal offence Preferably single Comply with medical fitness requirements for appointment in the SANDF.

4 Be prepared to Basic Military Training, Functional Training and to serve in uniform ADDITIONAL REQUIREMENTS. Applications will be divided into three groups: Applicants in possession of a recognized University Degree/ 3 -year Diploma (MSD Graduates). The nature of the degree will be evaluated against the need of the army for such skills at the given time. Applicants will be informed as to whether they will be invited for further selection. These applicants will be earmarked for leadership development and or non-leadergroup training. Leadership potential will be assessed as part of the selection process. Applicants with above average school grades and leadership potential A(MSD Applicants).

5 These applicants will be earmarked for training that will focus primarily on developing their leadership potential during the first year of training. After successful completion of these training courses, the members can be selected for studies at the Military Academy, or receive further training and fill leadership positions in one of the many functional fields in the army . Only candidates with Grade 12 exemption can be considered for studies at the Military Academy. Applicants with Grade 12 (MSD Applicants). Applications will be screened according to a CV, focussing on educational performance, participation in sport and community involvement.

6 Further selection will mainly focus on cognitive ability, motivation and determination to join the SA army . After successful completion of Basic Military Training, members will be earmarked for further training, the nature of which will mainly depend on the army 's need for those services at the given time. The member's preference will also be taken into account where possible. The bulk of the members will receive further training in Combat- orientated divisions, although some members will receive training in the support branches such as Personnel, Catering and Ordinance support services, etc.. DEPENDING ON THE REQUIREMENTS OF THE SA army , YOU MAY BE SELECTED FOR FURTHER.

7 TRAINING IN ONE OF THE FOLLOWING: ENGINEER CORPS. Our Motto Ubique Latin for Engineering is as old as war itself. Throughout centuries sappers, or Military Engineers as they are commonly known, had to make paths, build bridges, erect and breach obstacles during the conduct of war. Engineers help the army to move, to fight and to survive. The SA army Engineer Corps system consists of the Combat Engineer, Engineer Intelligence (which includes terrain intelligence, surveying, cartography and printing), operational construction as well as engineer logistics components. The corps is responsible for Engineer support to all types of forces during all types of operations and under all circumstances.

8 This corps have various duties. They build bridges, demolish bridges and structures, lay and lift mines , build roads and airfields, produce maps, etc. Candidates must be in possession of Grade 12 Mathematics. Subjects such as Geography and or Physical Science are preferable.. INFANTRY CORPS. The infantry is the nucleus of any army and as a result it is the largest fighting corps in the SA army . The infantry is expected to attack the enemy under any conditions; this requires courage, fitness and initiative. In order to attack the enemy with confidence, weapon training and field craft is the most important part of training.

9 An infantry member is usually a foot soldier, although it is not uncommon to fight from infantry combat vehicles. Infantry soldiers can also be transported by helicopter, aircraft, parachute, and a multitude of other methods. Versatility is an important characteristic of the infantry. INTELLIGENCE CORPS. The aim of the SA army Intelligence Corps is to prepare and provide combat ready intelligence functionaries and user systems for deployment, and to forecast what the enemy is planning, where and how they execute their task, at what time or period and with what strengths they can accomplish this. Intelligence is the product resulting from the collection, evaluation, analysis, integration and interpretation of all available information regarding the enemy and its environment.

10 The information obtained is immediately or potentially significant for military planning and operations . The collection of information is mainly conducted by means of battlefield surveillance which is the continued and systematic guarding of the battlefield to gather information timeously for tactical ground actions against the enemy, targets and for the conquering of terrain. Battlefield surveillance is conducted by well-trained surveillance teams that deploy close to the enemy positions by means of specialist skills. ARMOUR CORPS. Dedicated well-trained crews in tanks and armoured cars form the Iron Fist of SOUTH Africa. 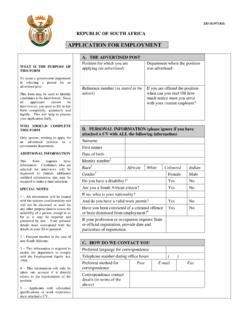 THE FOLLOWING VACANCIES ARE AVAILABLE …