THE STATE IN AFRICA - IPEA

THE STATE IN AFRICA . Beluce Bellucci*. ABSTRACT. AFRICA still faces major challenges, particularly with respect to such factors as religions and ethnic groups, among others. An understanding of the African STATE requires knowledge of various aspects, at both national and international levels. From a Western STATE -model standpoint, the African experience entails investigation of elds such as territory, language, technology, production methods, and the trend toward a neo-liberal STATE . Changes undertaken have sought not only development, but also a restructuring of economies to align them to the world market, and have resulted in improved prospects for progress in AFRICA .

THE STATE IN AFRICA Beluce Bellucci* ABSTRACT Africa still faces major challenges, particularly with respect to such factors as religions and ethnic

States, Africa, The state in africa

1 THE STATE IN AFRICA . Beluce Bellucci*. ABSTRACT. AFRICA still faces major challenges, particularly with respect to such factors as religions and ethnic groups, among others. An understanding of the African STATE requires knowledge of various aspects, at both national and international levels. From a Western STATE -model standpoint, the African experience entails investigation of elds such as territory, language, technology, production methods, and the trend toward a neo-liberal STATE . Changes undertaken have sought not only development, but also a restructuring of economies to align them to the world market, and have resulted in improved prospects for progress in AFRICA .

2 In AFRICA , seldom is ethnicity far removed from politics; at the same time, however, it does not provide the raw material for development. Within the scope of the contemporary STATE , ethnicity serves, principally, as an agent for accumulation, either of wealth or of political power. Tribalism is thus perceived as a political force in itself, and as a channel for expression in disputes for the acquisition of wealth, power and status. J. F. Bayard 1 THE STATE , POLITICS AND THE ECONOMY. There are many prejudices in relation to AFRICA , and these include notions relat- ing to the STATE , religions and ethnicity, all of which will be examined in this text.

3 Ideas formed by hasty judgment and science or special interests which, subsequently, circulate among intellectuals and laypeople, lead to comparisons between what is to be seen from a western standpoint and analyses of African so- cieties based upon western societal models. Over the long term, such views have led to stigmatization of African states , by affirming that, having been established by colonial law, they merit such epithets as external , quasi- STATE , artificial . or pseudo- STATE . In counterpoint to this view, Jean Fran ois Bayard (1989) pro- poses a historical view of the STATE in AFRICA built upon the bases of pre-colonial STATE traditions and on the colonial experience.

4 Contemporary African states have received influences both from colonialism and from pre-colonial kingdoms and empires, and are based both upon the Rule of Law and upon ancestral politi- cal traditions. These alternately draw near to and keep a distance from religion. Such phenomena are complex, making understanding and management of the African STATE more challenging. * Economist, director of Associa o Centro de Estudos Afro-Asi ticos. 10 The Perspective of the World Review | v. 2 | n. 3 | Dec. 2010. An understanding of the African STATE may be found delving within itself, or through its connections with the outside world; in the institutional aspects of power, in its central decision-making bodies, its leaders and administrators; in bodies where negotiation takes place and agreement is reached; and in the pro- duction of public goods and services, all of which are permeated by traditional and modern values.

5 The debate on the African STATE is extensive and the literature presents a number of historical reviews, current analyses, and alternative proposals. When enquiring about tradition in the Modern African STATE , one often hears references to polygamy, female excision, solidarity networks, hierarchies and social obligations, the weight of ancestors, duties of the young, rites and cults of the pagan religions, regional and ethnic mores and customs, and the way in which Africans, in their domestic economies, relate with power. Which of these features is incompatible with a project for modernity?

6 Which clash with universal values? As of that point, new questions may be raised. What is the aim of modernity today? One century ago, modernity sought to civilize the savages , by making them accept the Christian religion, the habit of wearing clothes, responsibility at work (above all else) among other things. Today it is well known what this civilization imposed by colonialism really entailed: forced labor, migration, compulsory cultivation, payment of taxes in cash, cor- poral punishment, imprisonment, massacres, banishment, denial of citizenship, legal segregation, and underdevelopment.

7 These were the facets of modernity meted out to the African colonies. In counterpart, those colonized gave their labor, the fruits of which were appropriated and transferred to the metropolis. The latter became richer, accumulated capital, built infrastructure in its (Euro- pean) territory, thereby becoming more knowledgeable and cultured. It became civilized to the point of requiring that Africans (not without their own participa- tion and complicity, once they had become citizens of sovereign states ) adopt the civilized standards of the moment: firstly, development and a strong STATE , and subsequently freedoms and the minimal STATE .

8 First dictatorship, later democracy. The rights to life, happiness, democracy, freedom and progress, held to be universal values, are generic abstractions that unfold as procedures, institutions, deadlines and particular rites, varying by region, ethnic group and country. How can these features be harmonized, while imbuing universal values with a historical setting? Polygamy, for example, can not be criticized outside its historical-social context. If the actual practices which brought it about have not changed, it is unlikely to be uprooted. What can be observed, even now in the 21st Century, are domestic societies living much as they did before, in terms of productive, cul- tural, religious and political aspects.

9 Certainly, the proclamation of monogamy as The STATE in AFRICA 11. a universal value and repression of the practice of polygamy will not bring about its demise. Polygamy will only be abolished when its material bases no longer ex- ist. Even more complex are the religious values which, dominated by individual faith and belief, are easily transferred to other material bases, and thus continue to propagate magical values within scientific societies. In summary, the Western STATE model is used as a reference, supported by concrete data, to conclude that Africans are unfit to manage their STATE and, therefore, that westerners should do it for them (as they did under colonialism).

10 Or that these states should be dissolved, restoring the kingdoms and tribes of old, thereby enabling local and regional governance that is better adapted to the ways of Africans. The task currently being undertaken by Africans is a redefinition of the con- cept of African democracy, so as to draft a STATE model that incorporates Africans'. historical and cultural processes alongside the scientific advances of this third mil- lennium. This task entails not only an epistemological effort, of reason, but also the outcomes of social practices undertaken. However, the current crisis of the STATE has been accompanied by social difficulties throughout the continent, and the identity crisis that the western model is currently undergoing.

Ethnicity and Tribalism: are these the Root Causes …

www.africaeconomicanalysis.org Ethnicity and Tribalism: are these the Root Causes of the Sudanese Civil Conflicts? African conflicts and the Role of Ethnicity: a … 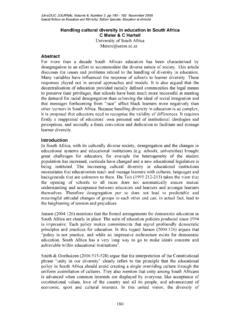 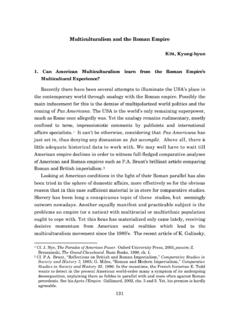 Multiculturalism and the Roman Empire - Waseda …

Multiculturalism and the Roman Empire 133 keyword controlling the USA’s immigrant policy and was also generally accepted as a premise in the Civil Rights Movement.

Ethnicity and Tribalism: are these, Ethnicity, HANDLING CULTURAL DIVERSITY IN EDUCATION, Multiculturalism and the Roman Empire