The Story of St. Patrick Not too long ago, during one of the Jeopardy university competitions, Alex Tribeck asked the question, When was Patrick , the patron saint of Ireland, canonized? No one correctly answered the question. The answer which had to be given in the form of a question is actually, What is never? Not only was Patrick sainted by the holiness of his life and the intensity and success of his ministry, he is also sainted by the acclaim of the people of Ireland. His sanctity was never an issue, and was ultimately accepted by the universal Church, though there is no Roman or Vatican document that authorizes or certifies his sanctity. This raises a lot of questions. Did Patrick ever really exist or is he part of a mythology, no different than the leprechauns?

The Story of St. Patrick Not too long ago, during one of the Jeopardy university competitions, Alex Tribeck asked the question, “When was Patrick, the patron saint of Ireland, canonized?

Story, Patrick, The story of st

1 The Story of St. Patrick Not too long ago, during one of the Jeopardy university competitions, Alex Tribeck asked the question, When was Patrick , the patron saint of Ireland, canonized? No one correctly answered the question. The answer which had to be given in the form of a question is actually, What is never? Not only was Patrick sainted by the holiness of his life and the intensity and success of his ministry, he is also sainted by the acclaim of the people of Ireland. His sanctity was never an issue, and was ultimately accepted by the universal Church, though there is no Roman or Vatican document that authorizes or certifies his sanctity. This raises a lot of questions. Did Patrick ever really exist or is he part of a mythology, no different than the leprechauns?

2 Is there any historical evidence? Do we know anything about him? Did he really accomplish the conversion of Ireland? The answer is, Yes, to everything. However, history does not easily yield the answers to the essential questions. Patrick left only a fragment of personal writing, known as the Confessions. There were no scribes following him around to record his deeds. Geographically, Ireland was the last stop before the end of the world according to the cosmology of the day. Few Europeans knew of its existence and those who did had little interest in it. There were few port settlements in Ireland and those, including Dublin and Wicklow, were only on the east coast, nearer to England. There was a High King who ruled from Tara, a hill not far from Dublin.

3 His role was to consolidate the power of all the lesser kings. Key to doing this was the role of the kings of each of the four provinces, or regional kings. Finally, each neighborhood had a king and there were more than one hundred of these underkings who were actually tribal leaders. The local king was a neighborhood bully and became king because he was the meanest person in the neighborhood. When I was a boy, my mother told me that our ancestors lived in the courts of the Irish kings. In truth, every Irishman is descended from those who roamed the courts of Irish kings. There was nowhere else to roam. None of them were quite like Camelot or Versailles. Ireland was a very hostile environment since every tribal king was constantly at war with every other tribal king.

4 Frequently, the regional kings had to intervene and this meant consolidating tribes to make war on the belligerents. Only once in the long history of Irish royalty was there a true consolidation of the kings and that was a brief and uneasy peace under the rule of the High King, Brian Boru, in the ninth century. Belligerence was almost recreation and it was the only game in the land. Patrick in Ireland This was the world that a young Roman citizen of Britain grew up in. Patrick was born in approximately 389 AD. His father was Calpurnius, a Christian deacon and his grandfather, Potitus, a presbyter. Calpurnius was a middle class landowner and a member of the Decurion, the municipal council of a Roman town on the west coast of Britain called Bannaventa.

5 In his sixteenth year, Patrick was captured and kidnapped by marauding Irishmen led by Niall, the High King, and brought to Ireland, to the ultimate places of the earth as described by Patrick himself. He was brought across the island to the province of Connaught, to the furthest part of the ultimate land near the western sea. He served a master named Miluce, a tribal king, and lived near the mountain subsequently called Crough Patrick in County Mayo. The relationship does not appear to be hostile although it was never less nor more than master slave. Patrick 's duties were apparently those of a shepherd. The hardship was that he missed his own family, the land of his birth, and experienced periods of intense loneliness.

6 On the positive side, the long hours of aloneness gave him the opportunity for growth and self discovery. He must have had interaction with local people because he learned to love the Irish , learned their language and customs. He became acquainted with their religious values through the Druid priests. He heard the stories and legends of the Irish people through the wandering storytellers, minstrels, and balladeers who would certainly be called on to entertain the household of the tribal It is hard for us to imagine this because of the amount of distraction and entertainment we experience. In an age in Ireland on the edge of prehistoric, there were no distractions and when one focused on something, they remembered everything.

7 It was easy to become subsumed into the culture. Patrick lived in this atmosphere for six years. Patrick was a Christian. Being Christian made as much of an impression on him as it does any sixteen year old boy. However, he was born into a family of clergymen and he couldn't help being part of a Christian culture. His Christianity was part of his persona and certainly a part of his reflections on the long lonely nights while he was tending his sheep. He remembered his prayers from boyhood and spent a great deal of time in prayer. His years of bondage, especially the later years became years of conversion. After much thought and prayer, he decided to make his way back to the east coast of Ireland, approximately 180 miles on foot.

8 He was now 22 years of age. There were no ports on the west coast. One thinks of Galway City or Donegal Town, relatively close to Miluce's dun. These ports may not have existed at that time. Foreign ships may not have ventured out into the western sea simply because they faced an infinity of water. There might not have been that kind of fear in the Irish fishermen. St. Brendan reported finding an Irish community when he arrived at Iceland, not too long after the death of Patrick . Patrick did get his ship. sailing from Wicklow and arriving in southern Gaul, probably at the port of Bordeaux. Preparation for Ministry This part of the Story is a summary of about twenty years. It took Patrick about three days to cross the channel to southern Gaul.

9 It took three additional years to reach his British home. He was sidelined by being part of a monastery at Lerins in southern France where he was brought under the spell of the monastic ideal. His future ministry was in the active world of the people, but monasticism became a principal and indispensible element of his idea of a Christian Church. Ireland did not have villages or cities. Patrick founded monastic type communities that subsequently became the villages and cities of Ireland.. Although he found his way back to Britain and to his hometown, there is no evidence that he had a burning desire to return to Ireland. Nor was there any indication that he had an interest in converting the heathen.

10 All of this came into new light as the result of a dream where an old friend had handed him a handful of letters from the people of Ireland begging him to come back. The seed of his vocation had been planted and now needed nourishment in order to bloom. He returned to Gaul and studied theology at a Gallic university called Auxerre. Patrick came under the influence of Germanus, possibly the rector of Auxerre, who mentored him during his academic years. Patrick was ordained with two other men who were to help spread Christianity in Ireland, one named Fith, a native of southern Ireland who took the name, Iserninus. The name of the other man was Auxilius, but the Irish call him Ausaille. Fourteen years passed from the day of ordination to the day he set out for Ireland. 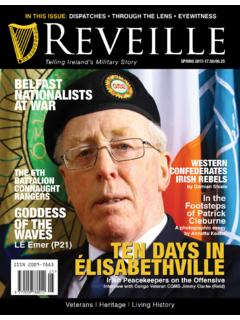 IN THIS ISSUE: THROUGH THE LENS EYEWITNESS …

BILL’S STORY W ar feverran high in the New England town ... No St. Helena for me! But drinking caught up with me again and my generous friend had to let me go. 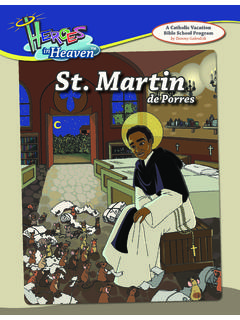 L a cardboard sign with “ St. Martin de Porres Pray for Us!” Read the following story and pull out the visual where designated in the story. ... st Grade & 2nd Grade 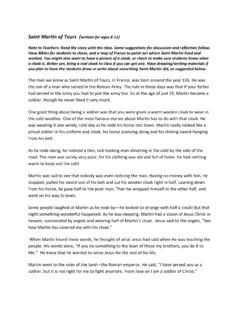 one. Have writing materials for students who might want to write some of their reactions to the story. The man we know as Saint Martin of Tours, France was born in … 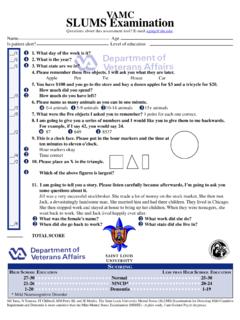 I am going to tell you a story. Please listen carefully because afterwards, ... The Saint Louis University Mental Status (SLUMS) Examination for Detecting Mild Cognitive 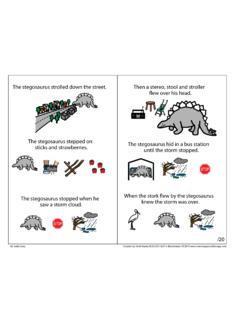 The stegosaurus strolled down the street. Then a …

Story, Tester, Down, The stegosaurus strolled down the street, Stegosaurus, Strolled 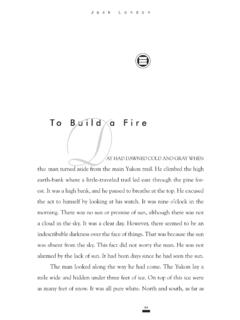 thousand miles to Nulato, and finally to St. Michael, on Bering Sea, ... would be forced to stop and build a fire. Only under its protection 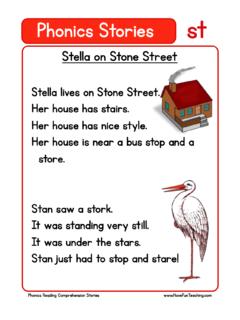 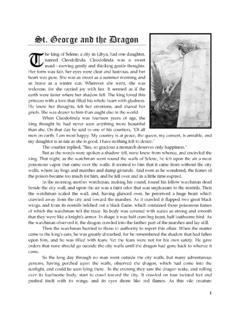 1 St. George and the Dragon he king of Selene, a city in Libya, had one daughter, named Cleodolinda. Cleodolinda was a sweet maid—moving gently …

Dragon, George, George and the dragon

ST. MARYS OHIO 45885 P.O. BOX 522 Pg.1. PREFACE A study of the person and life of Apostle Paul can be a most rewarding and humbling experience. ... The Apostle Paul.

BILL’S STORY, Alcoholics Anonymous, St. Martin, Story, The story, Martin of Tours, SLUMS Examination, SLUMS) Examination, The stegosaurus strolled down the street, To B u i l d a F i r e, Build a fire, Phonics Stories st, St. George and the Dragon, Love for the Holy Angels, The Apostle Paul