THE STUDY OF LIFE SATISFACTION - EUR

Identification of conditions for a good life One of the most interesting uses of life-satisfaction data is the empirical validation of ideas about conditions for the good life, and related ideas about the good society. Such ideas can of course be erroneous. For instance, people may …

2 In the concluding section a general overview is given of the work presented in this book. 1 RELEVANCE CONTEXT. The subject of life - SATISFACTION is part of a b roader field of enquiry, commonly referred to as Quality Of life (QOL). The prime concern in that field is to develop criteria for the good' life . Further aims are to asses how well reality fits these standards and to establish what would be required to come closer to the ideal. The thrust of much of this work is to create a better society. It is part of a wider tradition in social research; that of social engineering. Historical background Ideologically, this line of research is rooted in 18th century Enlightenment thinking.

3 From this perspective, the purpose of existence is life itself, rather than the service of King or God. Self- actualisation and happiness become central values. Society itself is seen as a means for providing citizens with the necessities for a good life . In the 19th century, this conviction manifested itself in the Utilitarian Creed that the best society is one which provides the greatest happiness for the greatest number'. In the 20th century it has inspired large scale attempts at social reform and influenced the development of the Welfare State. Efforts towards the creation of a better society manifested themselves in attacks on the evils of ignorance, illness and poverty.

4 Consequently, progress was measured by literacy, control of epidemic disease and the elimination of hunger. Social statistics were developed to record the extent to which progress in these areas had been achieved. Advances in the combat of these social ills were followed by efforts to create welfare-states that ensure a good life for everybody, in particular a good material standard of living. The extent of progress in that area was expressed in terms of monetary gains, security of income and the degree of income-equality. This gave rise to an abundance of social research on poverty and social-inequality, which today is still a major research tradition.

5 Correspondence to: Prof. Dr. Ruut Veenhoven Erasmus University Rotterdam, Faculty of Social Sciences, 1738 3000 DR Rotterdam, Netherlands. Ruut Veenhoven 2 The STUDY of life SATISFACTION In the 1960s, by which time most Western Nations had extensive Welfare-States, the new theme of limits to economic growth' appeared on the political agenda, and values came to shift to post-materialism'. This called for a broader conceptualisation of the good life and its measurement. As a result, the term quality of life ' was introduced. The initial use of the concept was polemical, serving to denote that there is more to human existence than material welfare.

6 Social indicator movement Disenchantment with the traditional economic criteria of welfare led to the development of social' indicators. And since economic indicators guide economic policy, it was argued that social indicators were required to guide social policy. The search for suitable indicators of non- economic welfare began in the early 1970's. Various pioneering studies were initiated at that time (see below). International agencies organised expert conferences (OECD, UN). In many Western Nations social-indicator STUDY centres emerged; either as semi-government foundations (USA, Netherlands), or as departments added to the bureau's of statistics (Sweden), or as long term research-programs at universities (Germany).

7 In several countries periodical quality of life surveys were started; for example the Level of Living Survey' in Sweden, the General Social Survey' in the USA and (parts of) the bi-annual Eurobarometer' in the European Union. Results from such activities are regularly presented in Social-Indicator-Reports, such as the three annual Socio-Cultural Report' in the Netherlands. These developments are frequently referred to as the Social Indicator Movement'. The economic recessions of 1975-76 and 1980- 82 and the related development of mass unemployment soon diverted attention from non- economic goals. Though policy interest and funding dwindled, the field matured scientifically.

8 In the 1980's the fruits of the early studies started in the early 1970's began to be harvested. Several important books in this area were published, such as The Quality of American life '. (Campbell et al., 1976), Social Indicators of Well-being' (Andrews and Withey 1976), The Social Progress of Nations' (Estes 1984), and Lebensqualit t in der Bundesrepublik' (Glatzer and Zapf 1984). Today the field of social indicator research can be characterised as one of many well established social scientific specialisations. There is an international journal, called Social Indicators Research', which publishes contributions from economists, sociologists and psychologists1.

9 There is also an international newsletter, entitled Social Indicator Network' (SINET)2. Specialists from various countries meet regularly at conferences of the International Sociological Association (ISA), which has an active Working Group on Social Indicators (WG05)3. Recently a new STUDY group has established: the international society for the STUDY of Quality of life (ISSQOL)4. Ruut Veenhoven 3 The STUDY of life SATISFACTION Conceptions of quality of life Currently, the term 'quality of life ' denotes two meanings: 1) the presence of conditions deemed necessary for a good life , and 2) the practice of good living as such. When used at the societal level, only the former meaning applies.

10 When we say that the quality of life of the people in a country is poor, we mean that essential conditions are lacking, such as sufficient food, housing and health care. In other words: the country is not liveable' for its inhabitants. At the individual level, the term quality of life can take on both meanings. When we say that somebody doesn't have a good life , we may mean that he/she lacks things deemed indispensable and/or that this person does not thrive. These conditions may coincide, but this is not necessarily the case. A. person can be rich, powerful and popular, but still be troubled. On the other hand, someone who is poor, powerless and isolated, may nevertheless be thriving both mentally and physically. 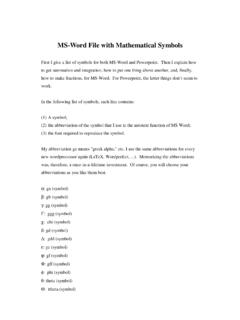 MS-Word File with Mathematical Symbols First I give a list of symbols for both MS-Word and Powerpoint. Then I explain how to get summation and integration, how to put one thing above another, and, finally,

The General Assembly, Proclaims this Universal Declaration of Human Rights as a common standard of achievement for all peoples and all nations, to the end that every individual and every organ of society, keeping this Declaration constantly in mind, shall strive by