2 [1] The appellant was convicted in the regional COURT , Tlhabane, Rustenburg, on a charge of rape, the case being that he had raped his daughter, E, who was at the time 12 years of age. The magistrate, Ms Mokgohloa, acting under s 52 of the Criminal Law Amendment Act 105 of 1997, stopped the proceedings and referred them to the high COURT for sentencing. The Bophuthatswana high COURT (per Mokgoatleng AJ) confirmed the conviction and sentenced the appellant to 15 years'. imprisonment. The APPEAL is before us with the leave of this COURT granted on petition. [2] The appellant was originally arraigned on five counts. One count related to the alleged indecent assault on one of his other daughters, L, but since he was discharged it is unnecessary to deal with this count.

3 The other three counts on which he was acquitted also concerned E: two related to indecent assault and the other to rape. The appellant's first appearance on trial was on 4 November 2002, and the Criminal Law (Sexual Offences and Related Matters) Amendment Act 32 of 2007, which, in general terms, commenced on 16 December 2007 and repealed the mentioned s 52, does not affect this case. [3] Before dealing with the merits of the case it is necessary to say something about the deplorable delays that have occurred in this matter. They put our criminal justice system to shame. The appellant was, after at least 18 COURT appearances, 3. convicted on 13 May 2004. The high COURT confirmed the conviction on 11 November 2004 and sentenced the appellant on the same date.

4 Whether the application for leave to APPEAL was delayed by the appellant or by the Legal Aid Board is not known but it is known that leave to APPEAL was refused by the high COURT on 25 June 2007, two and a half years later. An application for leave to APPEAL was filed within a month in this COURT but it could not be put before judges because the necessary parts of the record were not available. The Board, which was supposed to act in the interest of the appellant, only asked for those parts of the record on 4 November 2008, and they were filed on 11 February 2009. The petition was granted on 9 March 2009. [4] The full record of the proceedings was supposed to be filed within three months. It was not. It was filed on 29 June 2011, more than two years late and in spite of the fact that the record had been provided by the registrar of the high COURT on 10 February 2011 and was transmitted to the local Justice Centre on 20 April 2011 for filing.

5 In other words, it took the Board more than two months to transmit the record to the local Justice Centre and some two months for the latter to cross the road in Bloemfontein to file it with this COURT . [5] The appellant, in the meantime, languished in prison, probably wondering why the Constitution does not guarantee a right to an APPEAL without unreasonable delay and why the registrar and the Board did not take an active interest in his case. And although this COURT , in granting leave to APPEAL on 9 March 2009, directed the attention of the Board to the fact that the application for leave to APPEAL should be directed to the high COURT and not to this COURT , the Board simply did nothing until, we were told, August of this year. [6] All counsel could offer was an apology without explanation to the COURT , as if that were of any consolation to the appellant who has spent seven years in prison courtesy of the ineptitude of the Board.

6 [7] The problem with APPEAL records as set out above is not peculiar to the appellant. In another APPEAL , which was heard on the same day and was also a Board matter, the record was filed 30 months late (Kruger v S SCA case 506/11). The problem has also been exacerbated by the recently introduced s 316(10)(c) of 4. the Criminal Procedure Act 51 of 1977, which was adopted without consulting this COURT . It requires that the record of the full proceedings must be placed before this COURT before it may hear an application for leave to APPEAL , even if not required for deciding the application. Unless the accused can pay for the record and the attorney can pursue the matter, the experience in this COURT is that registrars simply do not have the capacity to comply with the provision in good time.

7 For would-be appellants out on bail, it is heaven sent; those who are not out on bail have to suffer in purgatory while the wheels of justice grind slowly, if at all. And petitions are piling up in the registrar's office, awaiting records from the high courts. [8] I do not intend in considering the merits of the APPEAL to deal with the alleged indecent assaults in respect of which the appellant was discharged but it is unfortunately necessary to deal with all the rape allegations. The charge on count 2, the one on which the appellant was found guilty, alleged that the accused was guilty of rape in that upon or about during 2001 at or near Rustenburg' he had raped E, a female person of 12 years of age. The other rape count, count 5, simply stated that he was guilty of rape having raped the 13 year old E at or near Rustenburg, without even mentioning a year.

8 In neither case was the address given. Both counts disregarded the clear provisions of s 84 of the Criminal Procedure Such lackadaisical approach to serious cases by the prosecution should not be countenanced. This is not a case where the prosecution did not have sufficient detail. I mention this for reasons that will become apparent. [9] E testified against her father. She recounted three cases of rape. The first, she said, took place in Glenharvie when she was in Grade 4 and 12 years old 1. Section 84: (1) Subject to the provisions of this Act and of any other law relating to any particular offence, a charge shall set forth the relevant offence in such manner and with such particulars as to the time and place at which the offence is alleged to have been committed and the person, if any, against whom and the property, if any, in respect of which the offence is alleged to have been committed, as may be reasonably sufficient to inform the accused of the nature of the charge.

9 (2) Where any of the particulars referred to in subsection (1) are unknown to the prosecutor it shall be sufficient to state that fact in the charge. (3) In criminal proceedings the description of any statutory offence in the words of the law creating the offence, or in similar words, shall be sufficient.'. 5. (something must be wrong: she was either about 9 and in Grade 4 or 12 and in Grade 7). The second, she said, took place at their home in the Newcastle Flats in Lucas Street which one may surmise, if the record is read purposively, is in Rustenburg while she was in Grade 7 (which would, on the probabilities, have been during 2001). The third, according to her evidence, took place at their dwelling in Van Zyl Street, Rustenburg, when she was in Grade 8 (which was during 2002).

10 [10] It is not necessary to relate the detail of her evidence about the rapes. All three took place under similar circumstances: she would have been in bed; her mother would have been elsewhere; the appellant would have undressed her; she would have resisted; and he would have had intercourse with her. [11] The tragedy of the case is that we are dealing with a dysfunctional family. The appellant was more often than not unemployed; he abused alcohol; they moved from place to place; and the children were on occasion sent to beg for food. One gains the impression that maybe because of this E and her sisters had some delinquent tendencies, like smoking at an early stage and running away even from foster care. E, while living under the care of a certain Mrs Burnham, told her that some of her father's friends had molested her. 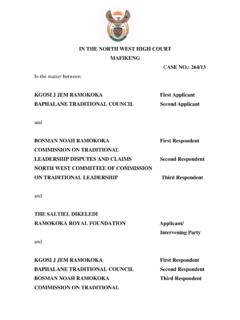 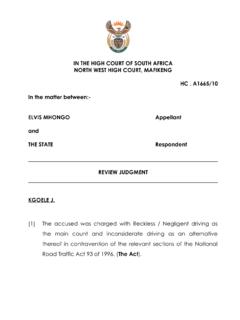 IN THE HIGH COURT OF SOUTH AFRICA NORTH …

IN THE HIGH COURT OF SOUTH AFRICA NORTH WEST HIGH COURT, MAFIKENG HC . A1665/10 In the matter between:-ELVIS MHONGO Appellant and … 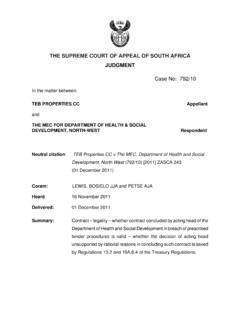 3 [4] In terminating the lease Malaka offered three grounds of justification for doing so. First, he relied on the basis that the lease was irregular for want of compliance with 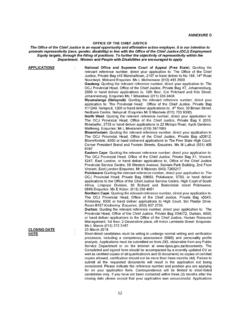 12 ANNEXURE D OFFICE OF THE CHIEF JUSTICE The Office of the Chief Justice is an equal opportunity and affirmative action employer. It is our intention to