the supreme court of appeal of south africa judgment reportable case no: 473/12 in the matter between: member of the executive council for health,

2 2 ORDER. On APPEAL from: Eastern Cape High COURT , Grahamstown (Makaula J sitting as COURT of first instance): (a) The APPEAL is dismissed with costs, including the costs of two counsel. (b) The cross- APPEAL is upheld with costs, including the costs of two counsel. (c) The order of the COURT below is amended by the deletion of paragraphs 1 and 4. _____. JUDGMENT. PLASKET AJA (MTHIYANE DP, MAYA JA, SALDULKER and MEYER AJJA. concurring). [1] The facts of this matter disclose a sorry tale of mishap, maladministration and at least two failures of moral courage. The APPEAL concerns three issues. In the first instance, it concerns the validity of two administrative decisions, taken by the second appellant (the superintendent-general of the Department of Health in the Eastern Cape province), to revoke approvals granted to the respondent (Kirland Investments) to establish two private hospitals which were given during his absence from office by the person who acted in his stead (the acting superintendent-general).

3 Secondly, it concerns the validity of the decision taken by the first appellant (the MEC of the Department of Health) in an internal APPEAL upholding the decisions to revoke the approvals. Thirdly, it concerns a cross- APPEAL by Kirland Investments against an order setting aside the approvals granted to it by the acting superintendent-general and remitting the applications for approval to the superintendent-general. The matter was heard by Makaula J sitting in the Eastern Cape High COURT , Grahamstown and both the APPEAL and cross- APPEAL are before this COURT with his leave. 3 The facts [2] Kirland Investments conducts business as an owner and operator of private hospitals.

4 This is an activity that was regulated, at the time relevant to this matter, by the Health Act 66 of 1977 and regulations made under that Act. The administration of the relevant provisions of the Act was assigned to the Eastern Cape provincial government. Regulation 7 of the Regulations Governing Private Hospitals and Unattached Operating Theatre Units1 vests the power to take decisions to grant or refuse approvals to operate private hospitals in the superintendent-general, and reg 20 creates an internal APPEAL to the MEC. [3] By letters dated 11 July 2006 and 15 May 2007, Kirland Investments applied for approvals to build and operate a 120 bed hospital in Port Elizabeth and two unattached operating theatres and a 20 bed hospital in Jeffreys Bay.

5 According to the superintendent-general in office at the time, Mr Lawrence Boya, he took advice on a number of applications from an advisory body that he had established for the purpose and decided to refuse Kirland Investments' applications. He gave instructions for letters to this effect to be drafted but before they could be signed by him, mishap struck when he was involved in a motor accident which resulted in him taking sick leave for six weeks. An acting superintendent-general, Dr Nandi Diliza, was appointed to perform his functions during his absence. The decisions taken by Boya were never communicated to Kirland Investments.

6 [4] By letter dated 23 October 2007 and signed by Diliza, however, Kirland Investments was informed that both of its applications had been approved. It was told that building plans would have to be submitted to the department within three months. (This period was later extended.) After Boya returned to work, he dealt with applications from Kirland Investments for amendments to the approvals that had been granted. Kirland Investments wanted an increase in the number of beds at both hospitals. Boya refused these applications because, he stated, according to departmental norms, Nelson Mandela Metro is over serviced'. The plans for both hospitals had, by this stage, already been submitted.

7 1. Government Notice R158 of 1 February 1980. 4 [5] By letter dated 20 June 2008, and without any prior notice to Kirland Investments, Boya purported to withdraw the approvals that Diliza had granted in respect of both hospitals. The letter stated that the approvals granted by Diliza were contrary to our view that the area is over supplied'. It then stated: I regret to inform you that the Department has withdrawn the approval. I point out that on 9. October 2007 and after I had considered all applications, I decided to refuse the application because Port Elizabeth is over serviced with private health facilities.'. [6] Kirland Investments was informed of its right to APPEAL against these decisions to the MEC in office at the time, Ms Pemmy Majodina, which it did. 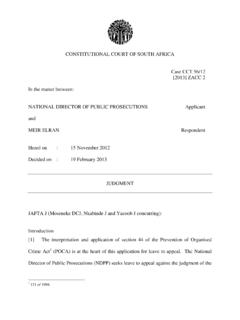 CONSTITUTIONAL COURT OF SOUTH AFRICA Case CCT 56/12 [2013] ZACC 2 In the matter between: NATIONAL DIRECTOR OF PUBLIC PROSECUTIONS Applicant and

ANNEXURE L DEPARTMENT OF TRADE AND …

78 ANNEXURE L DEPARTMENT OF TRADE AND INDUSTRY APPLICATIONS: Applications can be submitted: By post to the Registry Office, The Department of Trade and Industry, Private Bag x84, Pretoria, 0001; Hand-delivered to the dti Campus, corner of Meintjies and Robert Sobukwe Street, Sunnyside, 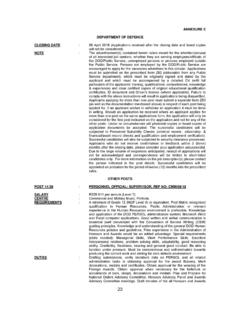 23 ANNEXURE E DEPARTMENT OF DEFENCE CLOSING DATE: 06 April 2018 (Applications received after the closing date and faxed copies will not be considered). NOTE: The advertisement(s) contained herein is/are meant for the attention/perusal of all interested job seekers, whether they are serving employees/officials of 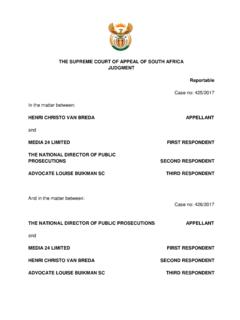 THE SUPREME COURT OF APPEAL OF SOUTH AFRICA JUDGMENT Reportable Case no: 425/2017 In the matter between: HENRI CHRISTO VAN BREDA APPELLANT