The Two Brothers As I Knew Them Harry and bill Evans As remembered by Pat Evans , wife of Harry Evans sister-in-law to bill Evans 2011 Matt H. Evans My First Glimpse of the Two Brothers What a strange pair, I thought. These two Brothers , so opposite in looks and temperament. One tall, bespectacled, introspective, nasal voiced and slow moving. The other, short, muscular, convivial, rapid speaking, quick to laugh, and sauntering of movement. I had come to Southeastern Louisiana University from New Orleans on a scholarship to be a teacher, the first in my family to go to college. They had come from New Jersey to study music, the first in their family to go to college. Our lives collided in this small southern town, Hammond, Louisiana. The lanky one arrived first, a classically trained pianist, with a Russian mother and a Welch father, once removed from their family's country of origin. He wanted to learn to play jazz.

6 Summers in New Jersey Harry’s teaching ceased in the summer, which allowed us to spend countless summers at his family home in Plainfield. This then allowed me to spend endless hours with Bill,

1 The Two Brothers As I Knew Them Harry and bill Evans As remembered by Pat Evans , wife of Harry Evans sister-in-law to bill Evans 2011 Matt H. Evans My First Glimpse of the Two Brothers What a strange pair, I thought. These two Brothers , so opposite in looks and temperament. One tall, bespectacled, introspective, nasal voiced and slow moving. The other, short, muscular, convivial, rapid speaking, quick to laugh, and sauntering of movement. I had come to Southeastern Louisiana University from New Orleans on a scholarship to be a teacher, the first in my family to go to college. They had come from New Jersey to study music, the first in their family to go to college. Our lives collided in this small southern town, Hammond, Louisiana. The lanky one arrived first, a classically trained pianist, with a Russian mother and a Welch father, once removed from their family's country of origin. He wanted to learn to play jazz.

2 A year or so later, he dragged his older brother Harry with him, on a return trip from a Christmas holiday. At the time, his older brother had been discharged from the Navy and was languishing in indecision about his next move in life. His father wanted him to manage a small, off-the-wall business of dubious profits, a driving range and miniature golf course, which evolved out of his father's love of golf, not out of his business acumen. The older brother knew this was not the future he envisioned. Both Brothers were not only accomplished musicians, but were gifted athletes, as well. Once the older brother came south to settle-in for college in the small southern town of Hammond, a stone's throw from New Orleans, the two resumed their life-long pattern of being virtually inseparable. One thinking for the other, laughing, protecting, risking for the other. They shared an old black Pontiac, ties, cuff links, and girls.

3 They stood out on campus with their heavy overcoats, fur-lined gloves, and bulky woolen sweaters. The younger one, bill , immersed himself in the music, living in the music building, practicing in his every spare moment, not as an onus, but as a joyful way of discovery. The older one slept through classes, decided to try a new instrument, the french horn, played around with the piano, always looking for an easy way out. It soon became obvious that the younger brother was an extraordinary talent. Students began to sit in the hall outside the door of his practice room, just to hear him play. The older brother was bothered that the campus jocks, from small insulated rural southern towns, disclaimed the music majors and taunted them as queers. He rallied the music majors, formed a football team, donned red jerseys, challenged the jocks and beat them hands down. All the while, being cheered on by the homeliest homecoming court they could assemble.

4 2. I first laid eyes on them at a school dance, a few days after my arrival on campus. The older one looked too ridiculous for words in a double breasted suit and wide tie. He looked like he had just gotten off the boat. In spite of his attire, he was a handsome man, short, but with the bluest of eyes, the fullest of lips, ears flat against his head and silky blond hair. Since he had a hard time finding girls his size, I made the first cut, being only five feet tall, four or five inches shorter than he. This fraternity of music majors decided I was ripe for the picking for Harry Evans , brother of bill Evans . This was to begin the next 30 years of my life's intricate involvement with these two Brothers , because of my marriage to Harry , but as a witness to bill 's contribution to jazz, which was never far removed from my husband's mind. If truth be known, I never meant to marry him and I couldn't say why I did.

5 Passion? That had something to do with it. But that's too easy an answer. Maybe it was because he was gentle, non-judgmental and low maintenance. Never making demands. Or so it seemed at the time. Two weeks after our marriage in the summer of 1950, we went to New Jersey. Plainfield to be exact, to work in the family business. The house on Greenbrook Road was saturated with music, dominated by a Ukrainian mother, one generation removed from the homeland, and a father of Welch heritage. He was prone to liquor, gambling and dandyism in his day. They had married late in life. Both of their fathers were coal miners, probably dying in the mines of Pennsylvania for all we know. Mary Soroka Evans , mother of Harry and bill , spent part of her childhood in an orphanage run by Russian Orthodox Priests. Being a caretaker and moralist came naturally to her. She was a gifted seamstress, always making costumes for the two boys.

6 There was a period when she sold corsets door to door to keep bread on the table. Their father, Harry Senior, slept his life away, never learned to drive and primped for hours before he left the house. During their teen years, bill played at the New Jersey Shore. Harry stayed home to help with the family business. They talked of Polka bands, music lessons, pinball machines, which bill loved to play lost loves, pool, bullies. bill the victim. Harry the rescuer. I only knew their childhood from stories they told. And the tons of scrapbooks (now lost). that they kept. From college days in Louisiana till their deaths, I was a living witness to the extraordinary relationship these two Brothers had. How the older one influenced the younger one, bill Evans , who by all accounts, became one of the greatest jazz musicians of his day. How the younger one idolized the older one, Harry Evans , who by all accounts, became a great music teacher in Baton Rouge, his adopted home in the South.

7 3. Childhood and Family Lore Their mother, Mary Soroka Evans , told endless stories about how different they were, yet how alike, how close. Close in age, close in their love of music, close in their love for each other. bill idolized his older brother who protected him from bullies, and eventually led him into jazz. Both studied piano from an early age, Harry first, bill to follow. Music pervaded the house, mostly Russian. Their mother's family was from the Ukraine, peasants; their father had a Welch background. She was headed for thirty and still unmarried when she met him on a train. By all that is told, the marriage was stormy, brought on by his heavy drinking, gambling, and abuse. One Christmas when he threatened to tear down the Christmas tree, Harry physically grabbed him and warned him, you will not.. Mary had memories of taking her sons to the Circus, Harry laughing till he fell apart. bill crying at the complexity of the spectacle.

8 She dressed them alike, making most of their clothes, took endless photos and labeled them: Harry , strong and handsome, bill , smart and weak. Uncle Michael, their mother's emotive brother, was a major figure in their lives. He took them to Yankee ball games in New York and spent endless time with them, as he had no children of his own. He would burst into their home with untrammeled energy, tell stories, shout Russian phrases, and cry about his plight in life. Mary, his sister, would not refrain from joining in, with her lament about how he brought this on himself. Aunt Lizzie, from their father's side lived with them, as did Mary's mother, their grandmother. At other times, cousins Peter and Paul. Their Russian grandmother and Aunt Lizzie often fought. Grandmother accusing Aunt Lizzie of stealing feathers from her pillow. Their mother set the standards of behavior for everyone. bill displayed some sympathy for his father, Harry for his mother, over this.

9 Mary Saroka Evans , mother to Harry and bill Evans had a beautiful untrained Alto voice. Birthdays were more than singing Happy Birthday. They were family choirs. As the Brothers grew older, they played music in bands, often led by Harry who frequently went to New York to hear Sinatra. They developed divided alliances to baseball teams. Harry a Brooklyn Dodger's fan and bill a New York Yankee's fan. Harry became the work horse around the family business while bill went off to the New Jersey Shore every summer to play music. At seventeen Harry had lost interest in school. With World War II coming to an end, he enlisted in the Navy. His Destroyer landed in Nagasaki, a city burned and blistered by an atomic bomb on August 9, 1945. Witnessing the immediate aftermath of Nagasaki ended his childhood. 4. College Days in Louisiana Those college days in the early fifties were for me, a drastic change from the mean streets of New Orleans.

10 bill often said for him, they were some of the happiest days of his life. A time when he and his brother roomed together in a house they shared with other music majors, owned an old Pontiac, frequented Kelly's bar to shoot dice and dined in style at the Casa de Fresa Hotel. They played in the College Orchestra, the Marching Band at football games and the College Jazz Band. The juke box in the student canteen, where hours were spent, played Billy Eckstine and Nat King Cole. It was a memorable event when they brought Tommy Dorsey to campus to play for a student dance. bill sailed through classes. Harry slept through his. bill played for our simple sorority skits, even for tone-deaf me, as I sang Me and My Teddy Bear and All I Want for Christmas is my Two Front Teeth. Occasionally they strayed across the state line to play in Mississippi at a club called South of the Border, where it was said the owner placed chicken wire fencing across the band stand, to keep the musicians from being hit by beer bottles. 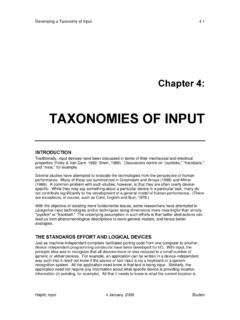 Developing a Taxonomy of Input 4.1 Chapter 4: TAXONOMIES OF INPUT. INTRODUCTION . Traditionally, input devices have been discussed in terms of their mechanical and electrical 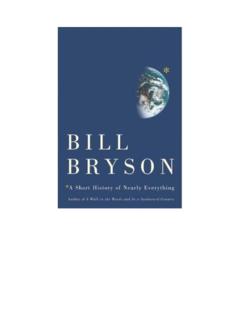 A Short History of Nearly Everything - HuZheng

Evans, Short, History, Everything, Short history of nearly everything, Nearly 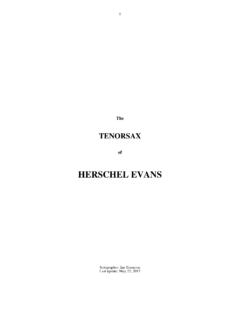