THE ULTIMATE GUIDE TO JIU-JITSU BRAZILIAN

THE ULTIMATE GUIDE TOBRAZILIAN JIU-JITSUTHE ULTIMATE GUIDE TOBRAZILIAN JIU-JITSUE dited by Sarah Dzida, Raymond Horwitz, Edward Pollard, Jeannine Santiago and Jon SattlerGraphic design by John BodineArchival assistance and proofreading by Monique Perdue 2008 Black Belt Communications LLCAll Rights ReservedManufactured in the United States of AmericaLibrary of Congress Control Number: 2008942249 ISBN-13: 978-0-89750-297-9 Electronic Edition Published 2012 WarningThis book is presented only as a means of preserving a unique aspect of the heritage of the martial arts. Neither Ohara Publications nor the author make any representation, warranty or guarantee that the techniques described or illustrated in this book will be safe or effective in any self-defense situation or otherwise.

THE ULTIMATE GUIDE TO BRAZILIAN JIU-JITSU Rorion Gracie (top) choke hold gets the job done a lot faster, and with a lot less effort. Another thing missing from Gracie jiu-jitsu is adherence to Oriental etiquette and traditions. For example, in Gracie jiu-jitsu, nobody bows. “That’s a part of Japanese culture,” Rorion Gracie says.

1 THE ULTIMATE GUIDE TOBRAZILIAN JIU-JITSUTHE ULTIMATE GUIDE TOBRAZILIAN JIU-JITSUE dited by Sarah Dzida, Raymond Horwitz, Edward Pollard, Jeannine Santiago and Jon SattlerGraphic design by John BodineArchival assistance and proofreading by Monique Perdue 2008 Black Belt Communications LLCAll Rights ReservedManufactured in the United States of AmericaLibrary of Congress Control Number: 2008942249 ISBN-13: 978-0-89750-297-9 Electronic Edition Published 2012 WarningThis book is presented only as a means of preserving a unique aspect of the heritage of the martial arts. Neither Ohara Publications nor the author make any representation, warranty or guarantee that the techniques described or illustrated in this book will be safe or effective in any self-defense situation or otherwise.

2 You may be injured if you apply or train in the techniques illustrated in this book and neither Ohara Publications nor the author is responsible for any such injury that may result. It is essential that you consult a physician regarding whether or not to attempt any technique described in this book. Specific self-defense responses illustrated in this book may not be justified in any particular situation in view of all of the circumstances or under applicable federal, state or local law. Neither Ohara Publications nor the author make any representation or warranty regarding the legality or appropriateness of any technique mentioned in this ULTIMATE GUIDE TOBRAZILIAN JIU-JITSU ForewordIn terms of public awareness, the world of martial arts is a fairly insular community, despite its international scope and broad influence.

3 Outside the circle of dedicated students and fans of some notable competitor, it prob-ably never really amounts to much on the radar screen of public opinion. Until recently, if you asked anyone on the street to name a famous martial artist, odds are they would say Bruce Lee. Younger people have probably heard about the tragic death of his son Brandon. And then what?The answer is: Gracie. Even if this name stirs no recognition, it rings a bell. As this book is about to reveal, it is nearly impossible to consider the subject of mixed-martial arts fighting without first hearing about a member of the Gracie family. It could be because they are responsible for energiz-ing and rejuvenating the practice of martial arts. It could be because word quickly spread about the 176-pound Royce Gracie defeating much larger men in open competitions.

4 Because the Gracie influence has become pandemic in martial arts, their particular discipline has come to be known as BRAZILIAN JIU-JITSU . Here is the collected genesis of an emerging phenomenon as it was in-troduced in the pages of these magazines: Black Belt, Martial Arts Training and Karate/Kung Fu Illustrated. The contents have been carefully selected and arranged to provide both a useful GUIDE and a fascinating picture of the incredible success curve that has made BRAZILIAN JIU-JITSU the discipline and sport of a new PollardBlack Belt Managing Editor6 BLACK BELTTABLE OF CONTENTSGRACIE JIU-JITSU .. 8 GRACIE JIU-JITSU VS. THE WORLD .. 13 THE MAN WHO ACCEPTED THE GRACIE 17 ROYCE GRACIE TAKES ALL COMERS IN THE UFC .. 21 THE BRAZILIAN JIU-JITSU 26 ROYCE GRACIE WINS UFC AGAIN.

6 119 ATTACKS AND TRAPS FROM THE GUARD .. 125 SURVIVAL SPORT FOR WOMEN .. 129 PROVING GROUND .. 133 GRACIES IN ACTION .. 139 THE HOUSE THAT GRACIE BUILT .. 144 GRACIE UPDATE .. 149 THE MAN WHO CHANGED THE WORLD .. 156UP CLOSE AND PERSONAL WITH KYRA 165 BJJ 7 BJJ 712/16/08 9:33:07 AM12/16/08 9:33:07 AM8 BLACK BELTGrACie Jiu-JiTsuby Don Beu Photos by Rick Hustead Black Belt August 1989 Written accounts about Rorion Gracie can be misleading. Stories of how he tied up a roomful of Chuck Norris black belts, or how he choked out kickboxer Ralph Algeria in less than three minutes, or how Navy SEALs come to him to hone their hand-to-hand combat skills can give you a mental picture of, well, , meeting Gracie is a bit of a jolt when you expect Rambo and are instead greeted with a warm smile and handshake by a man who, at least in terms of personality and education, has more in common with and articulate, Gracie could give diplomats lessons in charm and tact.

7 And if his friendly, personable manner runs contrary to the dis-tant, stoic manner we ve come to expect from many Asian masters of the fighting arts, or the tough-talking bravado often shown by many American fighters and competitors, that s not unusual. This is because Gracie and his family have been challenging and defeating a lot of traditions and beliefs for more than six decades in their quest to prove the effectiveness of the martial while the Gracie clan is renowned for challenging and defeating fighters of virtually every style, behind the public victories are teaching and training methods that also challenge many traditional beliefs. This departure from tradition begins at the Gracie student s first class. For the average judo or jujutsu student, as well as students of other martial arts, the bulk of the first lesson is usually devoted to learning to fall safely.

8 And the student s time with the instructor must often be shared with the rest of the class, usually also beginners who need the teacher s contrast, the Gracie JIU-JITSU student s first lesson is a private one, as are the next 35 lessons of the basic course. In that first class, the student will learn five simple and effective techniques: escapes from a head lock, collar grab, front choke, bear hug and one ground-fighting than spending at least half the class having the techniques practiced on him, the Gracie student spends the entire class practicing the techniques on the instructor, who provides constant feedback while the student perfects the moves through what about learning to fall? The student doesn t learn that until the 36th and final basic lesson.

9 And while this flies in the face of conventional wisdom and may raise more than a few eyebrows among those concerned about safety, it s important to remember that the Gracie student is not being 9 THE ULTIMATE GUIDE TO BRAZILIAN JIU-JITSUR orion Gracie (standing)10 BLACK BELT thrown in practice. In our system, the instructor takes the punishment, says Rorion, who believes it s more important that the student learn to fight effectively than to take it. While the average judo or jujutsu student goes home from his first class with his hands tingling from an hour or more spent slapping the mat dur-ing falling practice, the Gracie student goes home having practiced on five practical and effective self-defense techniques to the point at which they are almost a reflex.

10 In the next class, those techniques will be reviewed and a few new ones will be shown. Every time the student comes to class, he will review the previous techniques and learn new ones. This constant repetition is what makes the techniques become as the Gracie approach to beginners departs from tradition, so does their approach to conditioning. No less an authority on grappling than Gene LeBell has said that being in shape is more than half the battle when it comes to being an effective fighter. For most martial artists, being in shape involves not just countless sit-ups, push-ups and jumping jacks but also plenty of running, skipping rope and frequent visits to the weight room. We don t like to do a lot of running, Gracie says. We have some spe-cific exercises for JIU-JITSU , but these involve mostly stretching for what I like to call combative flexibility, like a cat. 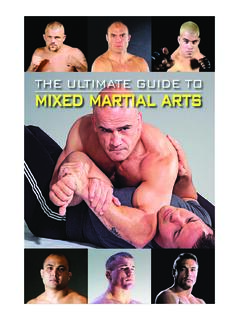 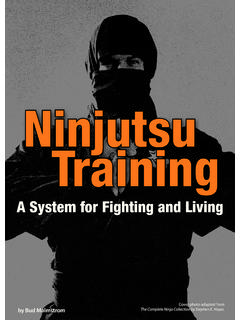 Ninjutsu Training Tips Anyone Can Use! ... Ninjutsu Training Myths: Does Ninjutsu Embody the Dark Side of Martial Arts? Stephen K. Hayes, Black Belt Hall of Fame member and author of six ninja books, offers his take on the public’s perception of ninjutsu vs. the history of its origins.