2 And an aluminium alloy. The variables involved in the process are examined and conclusions are reached regarding cyclic strain am-plitudes, cycle numbers, and frequency and fatigue effects. Introduction Vibratory Stress Relief ( ), as an alternative to natural ageing or thermal Stress Relief for reducing residual stresses in structures, has been debated for some 35 years. Investigations have ranged from tests on simple fatigue type specimens [1-3], with residual stresses induced by shot-peening or plastic bending, to vibration tests on castings and weldments [4-11].

3 Commercial processes normally involve clamping an ec-centric-mass electric motor to the work-piece and vibrating at various resonant frequencies for periods of the order of 15 minutes. Manufacturers claim to achieve greatly increased dimensional stability during machining and subsequent operation of castings and weldments, up to many tons in weight, as a result of applying the process. The evidence that the process does indeed produce increased dimensional stability is impossible to deny.

4 However, the various research investigations, aimed at assessing and ex- plaining the process, have arrived at a variety of conclusions ranging from open skepticism to guarded optimism. Early work by McGoldrick and Saunders [4] on castings and welded space frames, although giving no useful quan-titative data, concluded that vibrational Stress Relief depended upon the occurrence of plasticity at some time during the treatment, and that to achieve the necessary amplitudes, resonant vibration should be used.

5 These conclusions were supported by the findings of Moore [1] using shot-peened tapered cantilever beams. In the early 1960's, Buhler and Pfalzgraf contributed four papers [6 and 12-14] on the subject, describing tests on a variety of castings and weldments. Their conclusions were not encouraging, although they did achieve a 20 percent reduction in residual Stress when they increased the applied cyclic Stress to around the fatigue limit of the steel used. They were clearly restricted by their concern about potential fatigue failures, and hence never attained the Stress amplitudes that would be required for significant Stress Relief .

6 Adoyan, et al. [7 and 8] Contributed by the Materials Division for Publication in the JOURNAL OF ENGINEERING MATERIALS AND TECHNOLOGY. Manuscript received by the Materials Division, August 20, 1979. showed that long term stability of iron castings was much improved as a result of a vibration treatment although, like Buhler and Pfalzgraf, they were concerned about the possible failure of their castings during the vibration process. They proposed a combined annealling and vibration treatment to overcome this problem.

8 (76 x 19 x mm) thick subjected to cyclic bending between fixed strain limits. The value of their work was that they gave a plausible explanation of the behavior in terms of the cyclic softening characteristics of the material. According to the known monotonic tensile yield strength of the Almen strip, yielding would not have been anticipated during the application of cyclic loading. However, using a derived cyclic Stress -strain curve for the material they showed that, with a knowledge of the initial residual Stress magnitude, the applied cyclic Stress amplitude and the final strain condition, they could predict the residual Stress reduction.

9 Brogden [16] conducted a literature survey of the work prior to 1968. His conclusions as to the value of the process were largely pessimistic. He was not convinced that dimen- sional stability could be achieved without serious risk of fatigue failure during vibration. In 1972, Cheever [11] described an extensive investigation on the subject, conducted at the Battelle Memorial Institute. Initially, a series of small scale specimens including flame-hardened castings, welded rings, welded T-beams, welded boxes and welded plates were vibrated on a vibration table using a variety of gripping techniques. 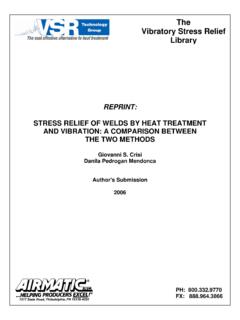 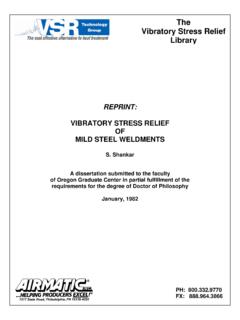 The dissertation "Vibratory Stress Relief of Mild Steel Weldments" by S. Shankar has been examined and approved by the following Examination Committee:

4. STRESS RELIEF BY HEAT TREATMENT Depending on the shape and size of the piece, heat treatment for residual stress relief can be carried out by heating the entire piece, or parts of it, in a furnace; or transforming it in a combustion