THE WALKING DEAD RISE OF THE GOVERNOR By …

THE WALKING DEAD. RISE OF THE GOVERNOR . By Robert Kirkman &. Jay Bonansinga PART ONE. THE HOLLOW MEN. There s nothing glorious in dying. Anyone can do it.. -- Johnny Rotten ONE. It occurs to Brian Blake as he huddles in the musty darkness, the terror constricting his chest, the pain throbbing in his knees: If only he possessed a second pair of hands, he could cover his own ears, and maybe block out the noise of human heads being demolished. Sadly, the only hands Brian currently owns are busy right now, covering the tiny ears of a little girl in the closet next to him. The seven-year-old keeps shuddering in his arms, jerking at the intermittent THWACK-GAHHHH-THUMP outside the closet.

1 THE WALKING DEAD. RISE OF THE GOVERNOR . By Robert Kirkman &. Jay Bonansinga PART ONE. THE HOLLOW MEN. There s nothing glorious in dying. Anyone can do it.. -- Johnny Rotten ONE. It occurs to Brian Blake as he huddles in the musty darkness, the terror constricting his chest, the pain throbbing in his knees: If only he possessed a second pair of hands, he could cover his own ears, and maybe block out the noise of human heads being demolished. Sadly, the only hands Brian currently owns are busy right now, covering the tiny ears of a little girl in the closet next to him. The seven-year-old keeps shuddering in his arms, jerking at the intermittent THWACK-GAHHHH-THUMP outside the closet.

2 Then comes the silence, broken only by the sticky sound of boot steps on bloody tile, and a flurry of angry whispers out in the vestibule. Brian starts coughing again. He can t help it. For days he has been fighting this god damned cold, a stubborn blight on his joints and sinuses that he cannot shake. It happens to him every fall, when the Georgia days start getting dank and gloomy. The dampness gets into his bones, saps his energy, and steals his breath. And now he feels the pounding stab of a fever with each cough. Doubling over in another hacking, wheezing fit, he keeps his hands pressed down on little Penny s ears as he coughs.

3 He knows the sound of his rasping is attracting all kinds of attention outside the closet door, out in the convolutions of the house, but there s nothing he can do about it. He sees tracings of light with each cough like tiny filigrees of fireworks across his blind pupils. The closet -- barely four feet wide, and maybe three feet deep -- is as dark as an inkwell, and it reeks of mothballs, mouse droppings, and old cedar. Plastic coat-bags hang down in the darkness, brushing the sides of Brian s face. Brian s younger brother Philip told him it was okay to cough in the closet. In fact, Brian was free to cough his fucking head off.

4 It would draw out the monsters but Brian better not give his goddamn cold to Philip s little girl. If he did, Philip would crack Brian's head open. The coughing fit passes. Moments later, another pair of lumbering footsteps disturb the silence outside the closet -- another dead thing entering the kill zone. Brian squeezes his hands tighter against Penny s ears, and the child flinches at another rendition of Skull Splitting in D-Minor. If asked to describe the racket outside the closet, Brian Blake would probably revert to his days as a failed music store entrepreneur and tell you that the head-cracking sounds are like a percussive symphony they might play in hell like some trippy outtake from Edgard Varese or a druggy drum solo from John Bonham -- with repeating verses and choruses: The heavy breathing of humans the shambling footsteps of another moving corpse the whistle of an axe the thunk of steel sinking into flesh.

5 And finally, the big finale, the splat of moist, dead weight on the slimy parquet. Another break in the action sends fever-chills down Brian s spine. The silence closes in again. Eyes now adjusted to the darkness, Brian sees the first shimmer of thick arterial blood seeping under the bottom of the door. It looks like motor oil. He gently yanks his niece away from the spreading puddle, pulling her back against the boots and umbrellas along the back wall. The hem of Penny Blake s little denim dress touches the blood. She quickly pulls the fabric away, and frantically rubs at the stain, as if the very absorption of the blood will infect her somehow.

6 Another convulsive coughing fit doubles Brian over. He fights it. He swallows the broken glass of a sore throat and pulls the little girl into a full-on embrace. He doesn t know what to do or say. He wants to help his niece. He wants to whisper something reassuring to her but cannot think of a single reassuring thing to whisper. The girl s father would know what to say. Philip would know. He always knows what to say. Philip Blake is the guy who says the things that everybody else wishes they had said. He says what needs to be said, and he does what needs to be done. Like right now. He s out there with Bobby and Nick, doing what needs to be done while Brian hunkers here in the dark like a scared rabbit, wishing he knew what to say to his niece.

7 Considering the fact that Brian Blake is the oldest of the two siblings, it s odd how Brian has always been the runt. Barely five feet seven in his boot heels, Brian Blake is a raw- boned scarecrow of a man scarcely able to fill out his black peg-leg jeans and torn Weezer t-shirt. A mousey goatee, macram . bracelets, and a thatch of dark Ichabod Crane hair complete the picture of a thirty-five year old Bohemian waif stuck in Peter Pan limbo, now kneeling in the mothball scented gloom. Brian sucks in a hoarse breath and looks down at the doe- eyed Penny, her mute, horrified face ghostly in the darkness of the closet. The child has always been a quiet little girl, with an almost porcelain complexion, like that of a China doll, which has given her face an almost ethereal cast.

8 But since her mother s death she has turned even further inward, becoming more wan and stoic, to the point of appearing almost translucent, with tendrils of raven black hair obscuring her huge eyes. For the last three days, she has hardly said a word. Of course, they have been three extraordinary days -- and trauma works differently on children than it does on adults -- but Brian is worried that Penny is perhaps slipping into some kind of shock. It s gonna be okay, Kiddo, Brian whispers to her with a lame little cough as punctuation. She says something without looking up at him. She mumbles it, staring down at the floor, a tear pearling on her dirty cheek.

9 What was that, Pen? Brian cradles her against him and wipes her tear. She says something again, and again, and again, but not exactly to Brian. She says it more like a mantra, or a prayer, or an incantation: It's never-ever going to be okay, never ever- ever-ever-ever. Sshhhhh. He holds her head, pressing it gently against the folds of his t-shirt. He feels the damp heat of her face against his ribs. He covers her ears again as he hears the THWACK of another axe blade outside the closet, smashing through the membrane of a scalp, into the hard shell of a skull, through the layers of dura, and into the pulpy gray gelatin of an Occipital lobe.

10 It makes a smacking noise like a baseball bat hitting a wet softball -- the ejaculate of blood like a mop head slapping the floor -- followed by a ghastly, wet thud. Oddly, that s the worse part for Brian: that hollow, moist, thump of a body landing on expensive ceramic tile. The tile is custom made for the house, with elaborate inlay and Aztec designs. It s a lovely house or at least, it once was. Again the noises cease. Again the horrible dripping silence follows. Brian stifles a cough, holding it in like a firecracker that s about to pop, so he can better hear the minute changes in breathing outside the closet, the greasy footsteps shuffling through gore. without pumping arsenic into her body. That is a fool’s way of killing. It is clumsy and childish and sure of discofery! See?” He turned away, as though to signify that the 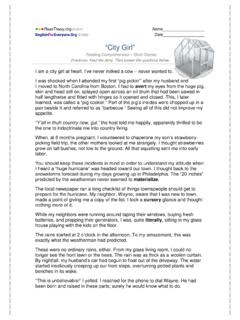 Answers and Explanations 1) A In paragraph 1, the narrator states, “I’m a city girl at heart.” The reader learns that she lived in Boston before she moved to North Carolina. 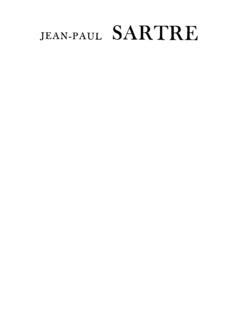 1 / Reading ter of a Catholic lawyer. She hated her wedding trip. He had carried her off before the end of the meal and rushed her into the train.

The Career-learning CAFÉ – www.hihohiho.com examples of storyboards page 1 quick start Three-scene storyboarding frames a process for reflecting on experience. It can be adapted to face-to-face, curriculum,

1 A Clean, Well-Lighted Place (1933) / Ernest Hemingway It was very late and everyone had left the café except an old man who sat in the shadow the leaves of the tree made against the electric light.