The Wall Street Journal December 9, 1992. How Africa Ruined Itself by George Ayittey Prompted by the horrific combination of After years of mismanagement, most African starvation and predatory violence, the West is now countries today are poorer than they were when they intervening in Somalia. But there are many African achieved their independence in the 1960s. This is leaders for whom nothing the West does is enough -- not a justification for colonialism but a statement of even a massive and dangerous humanitarian effort.

The Wall Street Journal December 9, 1992 2 bane of Africa 's development, suffocating and devouring its productive base. The centralization of economic power in Africa

1 The Wall Street Journal December 9, 1992. How Africa Ruined Itself by George Ayittey Prompted by the horrific combination of After years of mismanagement, most African starvation and predatory violence, the West is now countries today are poorer than they were when they intervening in Somalia. But there are many African achieved their independence in the 1960s. This is leaders for whom nothing the West does is enough -- not a justification for colonialism but a statement of even a massive and dangerous humanitarian effort.

2 Fact. Between 1965 and 1987, the average annual For such leaders the West, if it acts at all, acts badly growth rate of gross domestic product per capita was in Africa (or too late), and thereby bears a large for all of Africa and for sub-Saharan share of the responsibility for Africa 's problems. Africa -- if Nigeria is excluded. Between 1986. This view is demonstrably wrong. and 1991 real GDP fell by a year (including Arab North Africa , but not South Africa ). The rhetoric of victimization and blame was very much on display in late September, when The performance of sub-Saharan or black Africa President Abdou Diouf of Senegal addressed the has been the worst in the Third World.

3 Between General Assembly, before Somalia's condition 1980 and 1989, black Africa 's real GDP per capita had reached its current crisis point. Mr. Diouf, who contracted by an average of while East Asia is chairman of the Organization of African Unity, grew by and South Asia by 3%. chastised the West for ignoring Africa . He was echoing the sentiments of other African leaders, for According to Africa 's own elites, including such whom "marginalization" is the new term of abuse. veteran African leaders as Julius Nyerere and The abandonment of Africa by the West for Eastern Kenneth Kaunda, the causes of Africa 's problems Europe, they all warn, will vastly impede their are forever external: Western colonialism and efforts to alleviate Africa 's squalor.

4 The Clinton imperialism, the effects of the slave trade, administration should ignore these rantings. exploitation by multinational corporations, the injustice of the international economic system, It is true that the tribulations of Africa and the inadequate flows of foreign aid -- and now solicitations of its leaders have at times been greeted "marginalization.". with charitable indifference in world councils. But the constant whining of Africa 's leaders now draws But a new and angry generation of Africans cynicism and yawns in Africa itself.

5 The truth is: reject this claptrap and lay greater emphasis on Africa has been marginalized by African leaders internal factors: misguided leadership, systemic themselves. corruption, economic mismanagement, senseless civil wars, tyranny, flagrant violations of human While Eastern Europe, Latin America and rights and military vandalism. Southeast Asia have been steadfast in reforming These internal factors are themselves products of their economies, African leaders have remained defective economic and political systems established laggards, insisting on massive inflows of foreign aid and retained by many African leaders after to underwrite almost every reform.

6 Even the independence. Most of these systems are devastation of African war -- in Angola, Ethiopia, characterized by an extreme concentration of Mozambique, Namibia and now Somalia -- has not economic and political power in the hands of the been enough to prompt action within Africa itself. state -- and ultimately one individual. "People are dying in droves daily from bullets and starvation," laments Mahmoud Farra, a Somali In Africa , the state reserves for itself the right refugee in Britain, "yet African leaders are doing to intervene, plan and restructure almost every nothing to stop the war.

7 " How can the world take conceivable aspect of Africa 's economy and society. Africa seriously when its own leaders and elites are Socialism may be dead but statism lives in Africa . not serious about tackling its problems? State hegemony in the economy has now become the 1. The Wall Street Journal December 9, 1992. bane of Africa 's development, suffocating and By 1979, the economy was in tatters. Socialist devouring its productive base. policies had failed to engineer economic development, and foreign loans and credits only The centralization of economic power in Africa earned Somalia the title "The Graveyard of Aid.

8 ". has turned the state into a huge patronage machine For two decades, 1965-87, GDP per capita grew at a and bred elite cronyism. Lucrative state jobs have miserable annual rate, and food production per been parceled out to friends and government largess capita declined an average of 2% per year from 1975. doled out to loyal supporters. In Africa 's to 1985. pork-barrel politics, avaricious elites have absconded with the goods, leaving the people to An increasingly unpopular and corrupt Barre starve.

9 Regime resorted to brutal force to remain in power. Torture, mass executions and pillage were the order The labyrinth of controls and regulations of the day. Entire regions were devastated by a instituted by the state have provided ruling elites regime in combat with its own people. The with the chance for illicit enrichment. To help the "liberators" who drove Barre out in January 1991. unwary navigate the maze of regulations, ministers were little better, fighting among themselves and demand bribes and "commissions.

10 " In many African causing further carnage. countries, the World Bank and International Monetary Fund arrived too late. The state treasury Sadly, Somalia is not the exception. Angola, had already been "privatized" by the elites. Liberia, Mozambique, Sudan, Uganda and Zaire now lay in ruins. More distressing, many other By concentrating so much political power at the African countries are heading down the same path center, the state also became an irresistible prize for of corruption and self-destruction. 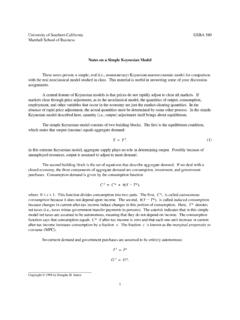 2 The statement that investment and government purchases are autonomous simply means that they are unaffected by changes in income in the current period. Notes on National Income and Balance of Payments Accounts Guide to Deal Structures Page 1 GUIDE TO DEAL STRUCTURES A. DEFINITIONS Financially, all that separates two films with identical revenues and costs is the deal with each WHAT WORKS ON WALL STREET - csinvesting

WHAT WORKS ON WALL STREET A Guide to the Best- ... O’Shaughnessy’s investment strategies have been featured in The Wall Street Journal, Barron’s, ... create happy kids? And what happens when they … 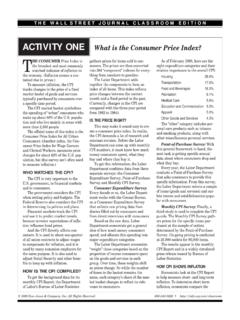 ACTIVITY ONE What is the Consumer Price Index?

THE WALL STREET JOURNAL CLASSROOM EDITION T HE CONSUMER Price Index is the broadest and most commonly watched indicator of inflation in the economy. (Inflation means a sus- 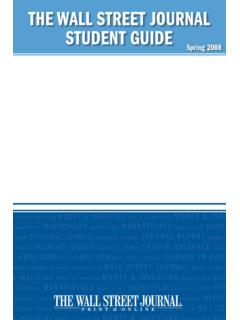 THE WALL STREET JOURNAL March 7, 2005; Page A18 The Case for the 'FairTax' By LAURENCE J. KOTLIKOFF Our tax code is a mess … March 2015 NBC News/Wall Street Journal Survey Q4 All in all, do you think that things in the nation are generally headed in the right direction, ... THE IIALI STREET JOURNAI ... Lost in Trarclation ... hero sat on the wall for the entire time he was meant to, it would be a different that the “toughness” of negotiators - The Wall …

role. Focusing the dialogue on this channel, rather than more substantive channels, such as automation, diverts the public debate to unproductive policy options. Can Tech Speed Up Emergency Room Care? A New York hospital system tests a new way to use telemedicine, where E.R. doctors examine patients without being in …