T he W orking P oor F amilies P roject P olicy B rief W inter 2014-2015. Low-Income Working Families : The Racial/Ethnic Divide Deborah Povich, Brandon Roberts and Mark Mather1. Introduction Key Findings for 2013 There is a large and growing economic divide among Among the million low- America's million Working Families ,2 with whites income Working Families and Asians at the top and other racial/ethnic groups in America, racial/ethnic falling behind. minorities constitute 58. percent, despite only making In 2013, Working Families headed by racial/ethnic up 40 percent of all Working minorities were twice as likely to be poor or low-income Families nationwide. (47 percent) compared with non-Hispanic whites (23.)

1 T he W orking P oor F amilies P roject P olicy B rief W inter 2014-2015. Low-Income Working Families : The Racial/Ethnic Divide Deborah Povich, Brandon Roberts and Mark Mather1. Introduction Key Findings for 2013 There is a large and growing economic divide among Among the million low- America's million Working Families ,2 with whites income Working Families and Asians at the top and other racial/ethnic groups in America, racial/ethnic falling behind. minorities constitute 58. percent, despite only making In 2013, Working Families headed by racial/ethnic up 40 percent of all Working minorities were twice as likely to be poor or low-income Families nationwide. (47 percent) compared with non-Hispanic whites (23.)

2 Percent) a gap that has increased since the onset of the The economic gap between Great Recession in 2007.* While low-income Working white and all minority Working Families comprise close to one-third of all Working Families Families is now 25 percentage points and has grown since the in America, the significant differences among racial/ethnic onset of the recession. groups present a critical challenge to ensuring economic growth and bringing opportunities to all workers, Families There are 24 million children and communities across the United States. in low-income Working Families and 14 million, well over half, In this brief, we highlight new Census Bureau data on are racial/ethnic minorities.

3 Low-income Working Families and differences across racial/. Over 50 percent of Latino, low- ethnic groups. Recognizing that public policy can play a income Working Families have critical role in our future prosperity by reversing these a parent without a high school conditions, we recommend state government policies equivalency degree, compared and actions that would improve conditions for millions with 16 percent of whites. of lower-income parents and their children, reduce Working Families headed by inequality and promote economic growth by ensuring a minorities have higher incomes well-qualified workforce and a sufficient number of jobs in the Mid-Atlantic region, with wages and benefits that support a family.

4 Alaska, Hawaii and parts of This research is supported by the Annie E. Casey, Ford, the Northeast, compared with Joyce and Kresge Foundations, as part of the Working minority Working Families Poor Families ProjecT (WPFP), a national initiative to in the upper Midwest and Mississippi Delta regions. strengthen state policies that can assist Families striving to work their way into the middle class and achieve economic security. * In this brief, white is used synonymously with non-Hispanic white.. Working Poor Families ProjecT | | | (301) 657-1480. In Nebraska, 72 percent of Working African American Families and 63 percent of Latino Families are low-income. One significant reason is that many people of color lack a high school diploma or equivalent.

5 One key to moving these Families out of poverty is for the state to get serious about investing in adult education and career pathways, so that all Families have the opportunity to acquire the skills needed to earn a decent wage and move ahead. James Goddard, Director of Economic Justice & Health Care Access, Nebraska Appleseed Divided Along Racial/Ethnic Lines Asian American Working Families were low-income, compared with nearly half of African American and Racial/ethnic minorities account for a large and American Indian Working Families and 55 percent growing share of the labor force. Between 2012 of Latino Working Families . About 34 percent of and 2022, the number of whites in the labor force Families headed by other race groups, which is projected to decline by 2 percent, compared with includes people identifying with multiple races, a 21 percent increase in racial/ethnic were low-income.

8 Increase JOB QUALITY HEALTH Care EDUCATION. and WAGES. Investments Extend MEDICAID. State to Low-Income Increase Need-Based Aid Increase EITC Working Families for Postsecondary Education Minimum Wage in ALL States Develop Career Pathways Provide Retirement Sick Leave Support English Language Benefits Learning As groups at the bottom of the income distribution mostly absent from the top income group (Figure make up a growing share of the labor force, the 2). More than a third of African American and total number of low-income Working Families is Latino Working Families are in the lowest income projected to increase even if the economic gaps bracket, which has an upper limit of around between different racial/ethnic groups remain $32,000, compared with just 13 percent of whites unchanged.

9 There are many signs that the and Asian Americans. Among racial/ethnic groups, economy is recovering, yet the number of low- Asian Working Families have the highest income;. income Working Families has continued to grow about 34 percent are in the top bracket (income of through the post-recession years, from million $126,000 or more). In recent decades, many Asians in 2009 to million in 2013. migrated to the United States to pursue college degrees and careers in high-paying science and Wealth inequality has also increased. Household engineering occupations. wealth or assets are important to low-income Families because they can provide a cushion to help Among Latinos, many of those at the bottom of the Families cover essential expenses, such as child economic ladder are recent immigrants.

10 In 2013, care, transportation and health care. But in 2013, 73 percent of low-income Working Families headed the median net worth of all white households was by Latinos included at least one immigrant parent. 13 times higher than that of African American Immigrant Families are more likely to have one or households, and 10 times higher than that of Latino more full-time Working parents, compared with households. The wealth gap between whites and But despite their high work blacks is currently at its highest level since effort, immigrant workers have lower earnings and A closer look at income disparities among Working fewer worker protections, on average, compared Families with children reveals gaps not only at the with workers. 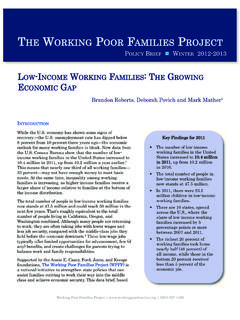 Working Poor Families Project | www.workingpoorfamilies.org 3 their needs. But in 2011, more than 7 in 10 low-income families and half of all poor families were 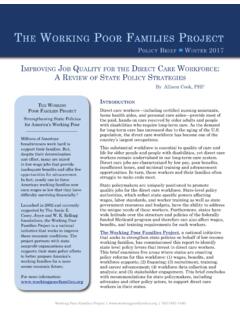 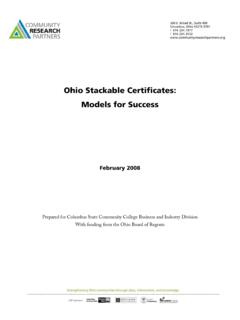 Tuberculosis (TB) in the Hispanic Population: An …

Evercare Study of Hispanic Family Caregiving in the …

Evercare® Study of Hispanic Family Caregiving in the U.S. Findings From a National Study November 2008 Evercare in collaboration with National Alliance for Caregiving

The Retail Trade Workforce in the United States - …

1 The Retail Trade Workforce in the United States Whether we realize or admit to it, most Americans spend a significant amount of time shopping.