1 1. Introduction The Worldwide Governance Indicators (WGI) are a long-standing research project to develop cross-country indicators of governance. The WGI consist of six composite indicators of broad dimensions of governance covering over 200 countries since 1996: Voice and Accountability, Political

2 We find that even after taking margins of error into account, the WGI permit meaningful cross-country and over-time comparisons. The aggregate Indicators , together with the disaggregated underlying source data, are available at _____. The findings, interpretations, and conclusions expressed in this paper are entirely those of the authors. They do not necessarily represent the views of the Brookings Institution, the International Bank for Reconstruction and Development/World Bank and its affiliated organizations, or those of the Executive Directors of the World Bank or the governments they represent. The Worldwide Governance Indicators (WGI) are not used by the World Bank for resource allocation. Financial support from the World Bank's Knowledge for Change trust fund, and the Hewlett Foundation is gratefully acknowledged. We would like to thank S. Rose, S. Radelet, C. Logan, M. Neumann, N. Meisel, J. Ould-Auodia, R. Fullenbaum, M. Seligson, F. Marzo, C. Walker, P. Wongwan, V. Hollingsworth, S.

4 This paper summarizes the methodology and key analytical issues relevant to the overall WGI. project. The updated data for the six Indicators , together with the underlying source data and the details of the 2010 update of the WGI, are not discussed in this paper but are available online at We also plan to release and document subsequent updates of the WGI purely online, with this paper serving as a guide to the overall methodological issues relevant to the WGI. project and future updates. In the WGI we draw together data on perceptions of Governance from a wide variety of sources, and organize them into six clusters corresponding to the six broad dimensions of Governance listed above. For each of these clusters we then use a statistical methodology known as an Unobserved Components Model to (i) standardize the data from these very diverse sources into comparable units, (ii) construct an aggregate indicator of Governance as a weighted average of the underlying source variables, and (iii) construct margins of error that reflect the unavoidable imprecision in measuring Governance .

5 We believe this to be a useful way of organizing and summarizing the very large and disparate set of individual perceptions-based Indicators of Governance that have become available since the late 1990s when we began this project. Moreover, by constructing and reporting explicit margins of error for the aggregate Indicators , we enable users to avoid over-interpreting small differences between countries and over time in the Indicators that are unlikely to be statistically or practically significant. 1. This emphasis on explicit reporting of uncertainty about estimates of Governance has been notably lacking in most other Governance While the six aggregate WGI measures are a useful summary of the underlying source data, we recognize that for many purposes, the individual underlying data sources are also of interest for users of the WGI data. Many of these Indicators provide highly specific and disaggregated information about particular dimensions of Governance that are of great independent interest.

6 For this reason we make the underlying source data available together with the six aggregate Indicators through the WGI. website. The rest of this paper is organized as follows. In the next section we discuss the definition of Governance that motivates the six broad Indicators that we construct. Section 3 describes the source data on Governance perceptions on which the WGI project is based. Section 4 provides details on the statistical methodology used to construct the aggregate Indicators , and Section 5 offers a guide to interpreting the data. Section 6 contains a review of some of the main analytic issues in the construction and use of the WGI, and Section 7 concludes. 2. Defining Governance Although the concept of Governance is widely discussed among policymakers and scholars, there is as yet no strong consensus around a single definition of Governance or institutional quality. Various authors and organizations have produced a wide array of definitions. Some are so broad that they cover almost anything, such as the definition of "rules, enforcement mechanisms, and organizations" offered by the World Bank's 2002 World Development Report "Building Institutions for Markets".

7 Others more narrowly focus on public sector management issues, including the definition proposed by the World Bank in 1992 as the manner in which power is exercised in the management of a country's economic and social resources for development". In specific areas of Governance such as the rule of law, there are extensive debates among scholars over thin versus thick definitions, where the former focus narrowly on whether existing rules and laws are enforced, while the latter emphasizes more the justice of the content of the laws. 1. The only exceptions we are aware of are that (a) the Transparency International Corruption Perceptions Index began reporting margins of error in the mid-2000s, and (b) more recently the Global Integrity Index has begun reporting measures of inter-respondent disagreement on their expert assessments of integrity mechanisms. 2. We draw on existing notions of Governance , and seek to navigate between overly broad and narrow definitions, to define Governance as the traditions and institutions by which authority in a country is exercised.

8 This includes (a) the process by which governments are selected, monitored and replaced; (b) the capacity of the government to effectively formulate and implement sound policies; and (c) the respect of citizens and the state for the institutions that govern economic and social interactions among them. We construct two measures of Governance corresponding to each of these three areas, resulting in a total of six dimensions of Governance : (a) The process by which governments are selected, monitored, and replaced: 1. Voice and Accountability (VA) capturing perceptions of the extent to which a country's citizens are able to participate in selecting their government, as well as freedom of expression, freedom of association, and a free media. 2. Political Stability and Absence of Violence/Terrorism (PV) capturing perceptions of the likelihood that the government will be destabilized or overthrown by unconstitutional or violent means, including politically-motivated violence and terrorism.

10 3. We believe that this definition provides a useful way of thinking about Governance issues as well as a useful way of organizing the available empirical measures of Governance as described below. Yet we recognize that for other purposes, other definitions of Governance may of course also be relevant. In this spirit we make the source data underlying our Indicators publicly available at , and encourage users with different objectives to combine the data in different ways more suited to their needs. In the next section of the paper we describe how we use our definitions to organize a large number of empirical proxies into the six categories mentioned above. We also note that these six dimensions of Governance should not be thought of as being somehow independent of one another. One might reasonably think for example that better accountability mechanisms lead to less corruption, or that a more effective government can provide a better regulatory environment, or that respect for the rule of law leads to fairer processes for selecting and replacing governments and less abuse of public office for private gain. 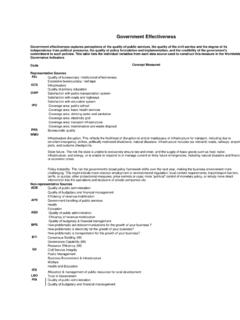 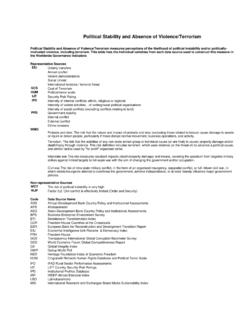 Political Stability and Absence of Violence/Terrorism 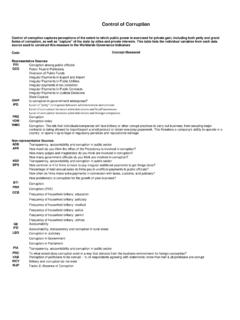 Control of Corruption Control of corruption captures perceptions of the extent to which public power is exercised for private gain, including both petty and grand 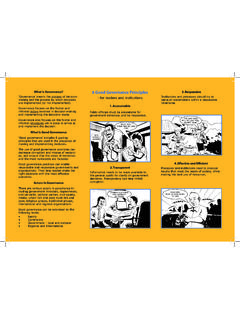 What is Good Governance ‘Good governance’ includes 8 guiding principles that are used in the processes of making and implementing decisions. The use of good governance principles can decrease corruption and misuse of resourc-es, and ensure that the views of minorities and the most vulnerable are included. Good governance practices can enable 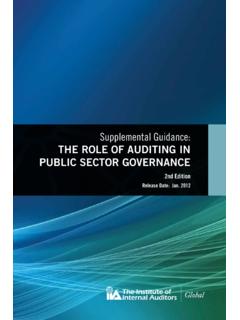 Public Sector Governance Governance is defined as the combination of processes and structures implemented by the board to inform, direct, manage, and monitor the organization’s activities toward the achievement of its objectives. In the public sector, governance relates to the means by which goals are established and accomplished. 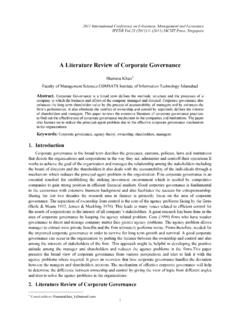 A Literature Review of Corporate Governance 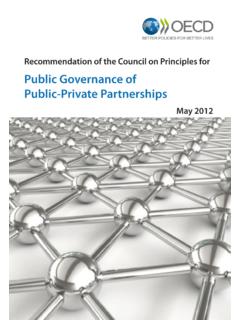 Public Governance of Public-Private Partnerships The Council, Having regard Articles 1, 2 a), 3 and 5 b) of the Convention on the Organisation for Economic Co-operation and Development of 14 December 1960; Having regard to the Recommendation of the Council for Improving the Quality of Government

Corporate governance: the board of directors and standing ...

governance standards are enshrined in law and are therefore mandatory. The best example of this is the US, where the Sarbanes-Oxley Act lays down detailed legal requirements. The role of the board of directors Nearly all companies are managed by a … 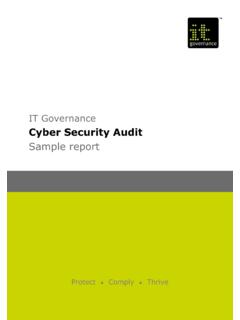 1.0 Executive summary IT Governance Ltd was invited to conduct a cyber security audit and review at Lannister’s Manchester offices on the 18 th June 2017 following a data breach that affected 50,000 customer accounts. The purpose of the audit was to assist the executive team in developing a strategy for managing cyber security. 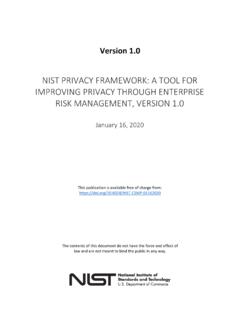 Jan 16, 2020 · Version 1.0 NIST PRIVACY FRAMEWORK: A TOOL FOR IMPROVING PRIVACY THROUGH ENTERPRISE RISK MANAGEMENT, VERSION 1.0 . January 16, 2020 . The contents of this document do not have the force and effect of law and are not meant to bind the public in any way.