94 thermomechanical , DYNAMIC MECHANICAL & dielectric methods Chapter 4. thermomechanical , DYNAMIC MECHANICAL AND dielectric . METHODS. D. M. Price INTRODUCTION AND PRINCIPLES. The dimensional and MECHANICAL stability of materials is of paramount importance to their use in the everyday world where they may encounter a wide variation in temperature through design or by accident. Many polymers are processed at elevated temperatures so as to enable them to flow and be more amenable to fabrication. Food items are cooked, pasteurised or otherwise heated or frozen. Ceramics are fired so as to consolidate their final structure. The relationship between a material's dimensional and MECHANICAL properties and its temperature is studied by the techniques described within this chapter and, due to common concepts, the effect of heat on the electrical properties of materials is also considered.

1 94 thermomechanical , DYNAMIC MECHANICAL & dielectric methods Chapter 4. thermomechanical , DYNAMIC MECHANICAL AND dielectric . METHODS. D. M. Price INTRODUCTION AND PRINCIPLES. The dimensional and MECHANICAL stability of materials is of paramount importance to their use in the everyday world where they may encounter a wide variation in temperature through design or by accident. Many polymers are processed at elevated temperatures so as to enable them to flow and be more amenable to fabrication. Food items are cooked, pasteurised or otherwise heated or frozen. Ceramics are fired so as to consolidate their final structure. The relationship between a material's dimensional and MECHANICAL properties and its temperature is studied by the techniques described within this chapter and, due to common concepts, the effect of heat on the electrical properties of materials is also considered.

2 thermomechanical Analysis and Thermodilatometry thermomechanical Analysis (TMA) can be defined as the measurement of a specimen's dimensions (length or volume) as a function of temperature whilst it is subjected to a constant MECHANICAL stress. In this way thermal expansion coefficients can be determined and changes in this property with temperature (and/or time) monitored. Many materials will deform under the applied stress at a particular temperature which is often connected with the material melting or undergoing a glass-rubber transition. Alternatively, the specimen may possess residual stresses which have been frozen-in . during preparation. On heating, dimensional changes will occur as a consequence of the relaxation of these stresses.

3 Stress ( ) is defined as the ratio of the MECHANICAL force applied (F) divided by the area over which it acts (A): = F/A (1). The stress is usually applied in compression or tension, but may also be applied in shear, torsion, or some other bending mode as shown in Figure 1. The units of stress are N m-2 or Pa. Principles of Thermal Analysis & Calorimetry 95. Figure 1. Common MECHANICAL deformation modes: compression, tension, shear, torsion, bending (single cantilever, dual cantilever, three point bending). If the applied stress is negligible then the technique becomes that of thermodilatometry. This technique is used to determine the coefficient of thermal expansion of the specimen from the relationship.

4 L0 = dl/dT (2). where is the coefficient of thermal expansion (ppm C-1 or m m-1 C-1), l0 is the original sample length (m) and dl/dT is the rate of change of sample length with temperature ( m C-1). DYNAMIC MECHANICAL Analysis DYNAMIC MECHANICAL Analysis (DMA) is concerned with the measurement of the MECHANICAL properties ( MECHANICAL modulus or stiffness and damping) of a specimen as a function of temperature. DMA is a sensitive probe of molecular mobility within materials and is most commonly used to measure the glass transition temperature and other transitions in macromolecules, or to follow changes in MECHANICAL properties brought about by chemical reactions. For this type of measurement the specimen is subjected to an oscillating stress, usually following a sinusoidal waveform: 96 thermomechanical , DYNAMIC MECHANICAL & dielectric methods (t) = maxsin t (3).

5 Where (t) is the stress at time t, max is the maximum stress and is the angular frequency of oscillation. Note that =2 where is the frequency in Hertz. The applied stress produces a corresponding deformation or strain ( ) defined by: = (change in dimension)/(original dimension) = l / lo (4). The strain is measured according to how the stress is applied ( compression, tension, bending, shear etc.). Strain is dimensionless, but often expressed in %. For an elastic material, Hooke's law applies and the strain is proportional to the applied stress according to the relationship: E = d /d (5). Where E is the elastic, or Young's modulus with units of N m-2 or Pa. Such measurements are normally carried out in tension or bending, when the sample is a soft material or a liquid then measurements are normally carried out in shear mode, thus a shear modulus (G) is measured.

6 The two moduli are related to one another by: G = E/(2 + 2v) (6). where v is known as the Poisson's ratio of the material. This normally lies between 0. and for most materials and represents a measure of the distortion which occurs ( the reduction in breadth accompanying an increase in length) during testing. If the material is viscous, Newton's law holds. The specimen possesses a resistance to deformation or viscosity, , proportional to the rate of application of strain, : = d /(d /dt) (7). The units of viscosity are Pa s. A coil spring is an example of a perfectly elastic material in which all of the energy of deformation is stored and can be recovered by releasing the stress. Conversely, a perfectly viscous material is exemplified by a dashpot, which resists extension with a force proportional to the strain rate but affords no restoring force once extended, all of the deformation energy being dissipated as heat during the loading process.

7 In reality, most materials exhibit behaviour intermediate between springs and dashpots . viscoelasticity. Principles of Thermal Analysis & Calorimetry 97. Figure 2. Relationship between stress ( ) and strain ( ) during a DYNAMIC MECHANICAL test. If, as in the case of DMA, a sinusoidal oscillating stress is applied to a specimen, a corresponding oscillating strain will be produced. Unless the material is perfectly elastic, the measured strain will lag behind the applied stress by a phase difference ( ). shown in Figure 2. The ratio of peak stress to peak strain gives the complex modulus (E*) which comprises an in-phase component or storage modulus (E') and a 90 . out-of-phase (quadrature) component or loss modulus (E ).

8 The storage modulus, being in-phase with the applied stress, represents the elastic component of the material's behaviour, whereas the loss modulus, deriving from the condition at which d /dt is a maximum, corresponds to the viscous nature of the material. The ratio between the loss and storage moduli (E /E') gives the useful quantity known as the MECHANICAL damping factor (tan ) which is a measure of the amount of deformational energy that is dissipated as heat during each cycle. The relationship between these quantities can be illustrated by means of an Argand diagram, commonly used to visualise complex numbers, which shows that the complex modulus 98 thermomechanical , DYNAMIC MECHANICAL & dielectric methods Figure 3.

9 Argand diagram to illustrate the relationship between complex modulus (E*) and its components. is a vector quantity characterised by magnitude (E*) and angle ( ) as shown in Figure 3. E' and E represent the real and imaginary components of this vector thus: E* = E' + iE" = (E'2 + E"2) (8). So that: E' = E* cos (9). and E" = E* sin (10). dielectric Techniques In a manner analogous to TMA and DMA, a specimen can be subjected to a constant or oscillating electric field rather than a MECHANICAL stress during measurements. Dipoles in the material will attempt to orient with the electric field, while ions, often present as impurities, will move toward the electrode of opposite polarity. The resulting current flow is similar in nature to the deformation brought about by MECHANICAL tests and represents a measure of the freedom of charge carriers to respond to the applied field.

10 The specimen is usually presented as a thin film between two metal electrodes so as to form a parallel plate capacitor. Two types of test can be performed: Principles of Thermal Analysis & Calorimetry 99. Thermally Stimulated Current Analysis (TSCA). In this technique the sample is subjected to a constant electric field and the current which flows through the sample is measured as a function of temperature. Often, the sample is heated to a high temperature under the applied field and then quenched to a low temperature. This process aligns dipoles within the specimen in much the same way that drawing a material under a MECHANICAL stress would bring about orientation of molecules in the sample. 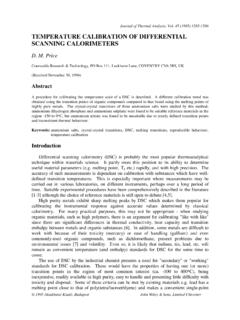 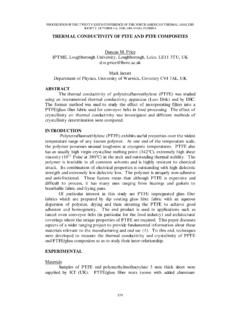 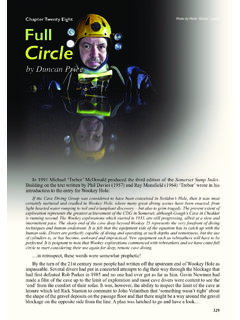 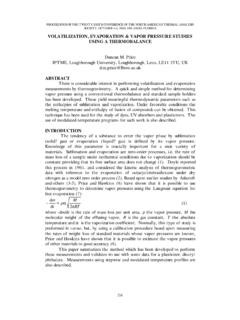 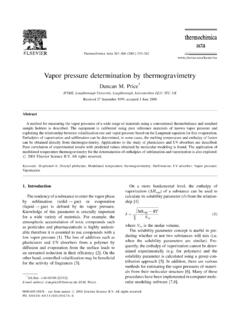 to obtain good vapor pressure data, Price et. al. [29] have shown that temperature-jump methods can be used to estimate DHsub and DHvap for substances which decompose on melting. 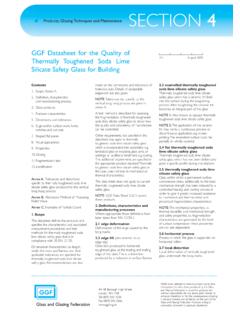 2.8 overall bow deformation of the whole pane of horizontally and vertically toughened glass caused by the heating and cooling process 2.9 roller wave distortion 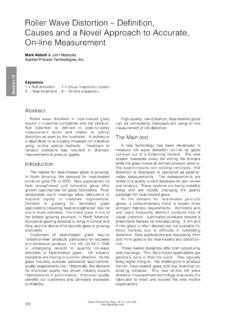 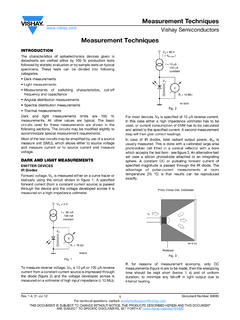 Measurement Techniques www.vishay.com Vishay Semiconductors For technical questions, contact: emittertechsupport@vishay.com) and ).) can be I 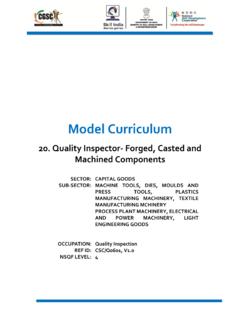 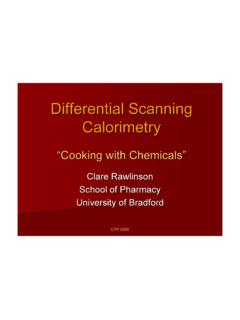 “Cooking with Chemicals” - Welcome to MMS … 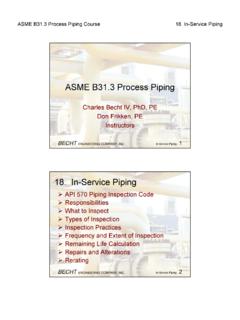