3 Motions Number: File original. Motions for extension of time to file briefs: see Notice to Attorneys and Parties . Envelopes: Include pre-addressed, stamped envelopes for all parties including the movant. Briefs Number: File original and three copies. Briefs should be securely bound on the left-hand side or upper left-hand corner and in a manner that will allow them to lie flat when opened. Certificate of Interested Persons: Not required. Docketing Statement: Not required. Rehearing Motion for Rehearing: File original. Motion for Rehearing En Banc: File original. FOR ADDITIONAL LOCAL RULES AND PROCEDURES, SEE THE FOLLOWING ATTACHED NOTICE TO ATTORNEY. AND PARTIES THE COURT SENDS TO COUNSEL DURING AN APPEAL . 1. THIRD DCA. IMPORTANT NOTICE. EFFECTIVE IMMEDIATELY. The docket of the THIRD COURT of APPEAL is available on-line at 2. THIRD DCA. 2005. THIRD DISTRICT COURT OF APPEAL .

6 Habeas Corpus or appeals therefrom do not require a filing fee. APPENDIX: Original and three copies, securely bound on the top or upper left hand corner AND SHOULD BE FILED SEPARATE. FROM THE BRIEFS. RESPONSE: ORIGINAL WRITS: Original and three copies. Motions: original only. MOTIONS FOR EXTENSION OF TIME FOR BRIEFS ONLY: Original and copies, for all parties in the certificate of service, including yourself. Include pre-addressed, stamped envelopes for all parties including yourself. BRIEF: Original and three copies, securely bound on the left hand side and in a manner that will allow them to lie flat when opened. No specific color folder is required. RECORD: When providing directions for inclusion of exhibits in the record on APPEAL , do not designate any tangible evidence without prior permission of the COURT . This applies especially to drugs, firearms, explosives, x-rays and heavy or bulky items such as large maps, photographs and graphs.

7 NOTICE TO INVOKE TO THE SUPREME COURT : Original with two copies and a copy of the opinion and order denying rehearing with $ filing fee payable to Clerk, Supreme COURT of florida . COPIES: Copies are made by COURT personnel only. Please call to be sure file is available for viewing. The copying fee is $ per page. We require exact cash or law firm check. We do not mail copies unless both copies and postage have been prepaid. We prefer that you come in the afternoon to make copies. MARY CAY BLANKS. Clerk DISTRICT COURT of APPEAL THIRD DISTRICT 3. THIRD DCA. 4. THIRD DCA. Inside the THIRD DISTRICT COURT of APPEAL The THIRD DCA1. Introduction History and Jurisdiction location on July 1, 1976. A new wing Known for its long standing of the THIRD DISTRICT was added to the building in 1990. custom of granting oral argument The THIRD DISTRICT COURT of While the COURT 's mailing in every APPEAL when it is APPEAL was one of the original three address is 117th Avenue, a short DISTRICT Courts created by the turn onto Thomas Barkdull Way requested, its liberality in granting florida Legislature in 1957.

8 The will take you into the COURT 's extensions of time, and its low-key parking lot. The THIRD DISTRICT is approach to enforcement of mere first judges on the COURT were Tillman Pearson, Mallory Horton, the only structure on Barkdull Way, procedural technicalities, the THIRD the intersection of which with 117th and the late Charles Carroll. The DISTRICT 's credo is that each case Avenue is marked by a traffic signal COURT convened in classroom should be decided on its merits facilities at the University of Miami and a distinctive street sign erected instead of by some gotcha device. while waiting for a new building the in celebration of Judge Barkdull's Practitioners before the THIRD original judges thought was to be 30th anniversary with the COURT . DISTRICT can be certain of three constructed with funds approved by Although the State's largest things: oral argument in any APPEAL the Legislature.

9 However, the early single metropolitan area of Greater (final and non-final) in which it is THIRD DISTRICT found itself caught Miami is within its jurisdiction, the in the cross fire between the faction THIRD DISTRICT comprises only two requested; adequate time to that wanted the Second DISTRICT to counties, Miami-Dade and Monroe, research the issues and to prepare the fewest of any of the five their briefs; and consideration of be located in Lakeland and the one that wanted the COURT to be districts. The COURT does not have the substance of their arguments, any permanent location other than headquartered in Orlando. Fears absent a jurisdictional impediment in Miami. However, cases arising in arose among the pro-Lakeland or flagrant or repeated procedural faction that unless the money Monroe County are sometimes set violations. This article will discuss that the Legislature had set aside for argument in Key West or at those characteristics of the THIRD for building an appellate Plantation Key and oral argument DISTRICT in greater detail, provide a courthouse was used for calendars are sometimes set at an glimpse of the COURT 's history, constructing the Second DISTRICT 's area law school.

10 Eleven full time provide practice pointers for building in Lakeland (instead of the judges now sit on the COURT . A brief THIRD DISTRICT 's building) sketch of the historical background attorneys who may appear before political pressures would result in of all the DISTRICT courts of APPEAL the COURT , and look ahead to some and the florida Supreme COURT areas of possible future concern for the Second DISTRICT being situated in Orlando. So the funds that the may be found on the internet at the COURT .. THIRD DISTRICT had expected to be This article was updated with the assistance of Joanne Sargent, available for its building were used for the Second DISTRICT instead, and whose title is COURT Counsel, but Practice Before the the THIRD DISTRICT convened in whose job description includes two distinct functions. As COURT borrowed quarters at the THIRD DISTRICT University of Miami until 1961. 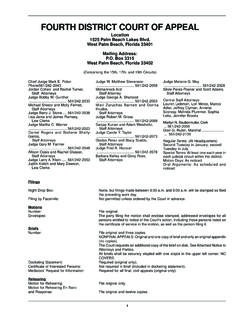 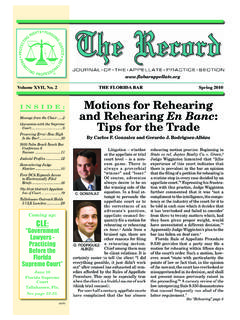 The Record - Appellate Practice Section of the …

3 continues, next page CHAIR’S MESSAGE from previous page D. Palmer of the Fifth District Court of Appeal, who serves as Chair of the Supreme Court Committee on 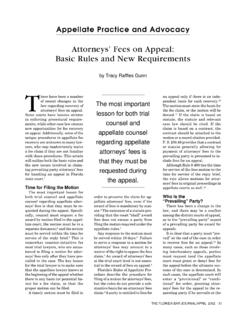 THE FLORIDA BAR JOURNAL/APRIL 2002 31 Attorneys’ Fees on Appeal: Basic Rules and New Requirements The most important lesson for both trial counsel and 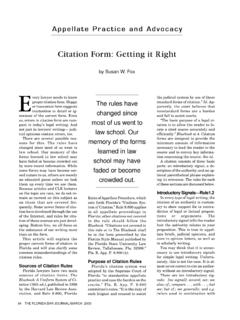 Citation Form: Getting it Right - The Florida Bar

84 THE FLORIDA BAR JOURNAL/MARCH 2000 Citation Form: Getting it Right The rules have changed since most of us went to law school. Our memory of the forms 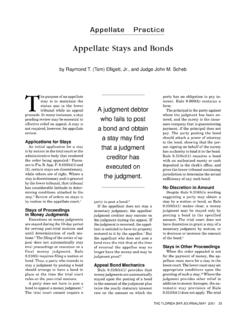 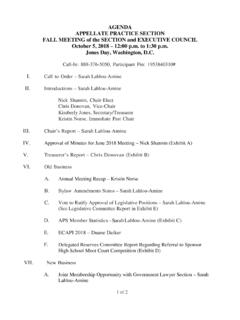 Appellate Practice Section can proudly note that it has had an appellate article in every issue with The Florida Bar Journal this year. As always, if people are interested in writing articles, contact 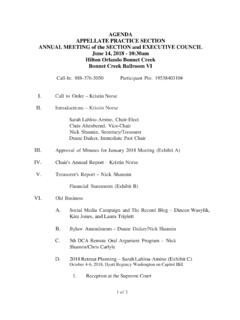 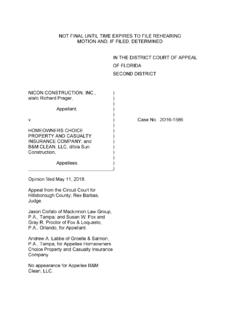 MOTION AND, IF FILED, DETERMINED IN THE …

not final until time expires to file rehearing motion and, if filed, determined in the district court of appeal of florida second district nicon construction, inc., )

District, Court, Appeal, Florida, In the, In the district court of appeal of florida 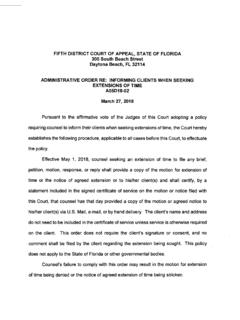 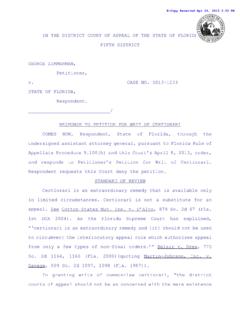 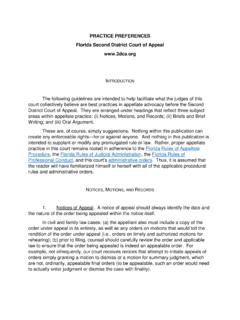 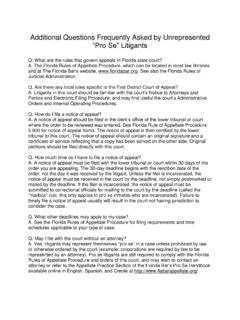