1 Tokyo Steel s Views to Global Warming revised on June 25, 2010 with the latest data 1. Introduction A worldwide movement to control global warming is under way. In 1997, the Kyoto Protocol became the world s first international agreement on the issue, producing commitments by principally European countries and Japan to reduce their CO2 emissions in 2012 by about 5% compared with 1990. Further discussions have been continued at the summits and international conferences, trying to determine additional and stricter targets, and to fashion a system in which all nations can participate. Taking action against global warming is the responsibility of current generations.

1 Tokyo Steel’s Views to Global Warming revised on June 25, 2010 with the latest data 1. Introduction A worldwide movement to control global warming is under way.

1 1 Tokyo Steel s Views to Global Warming revised on June 25, 2010 with the latest data 1. Introduction A worldwide movement to control global warming is under way. In 1997, the Kyoto Protocol became the world s first international agreement on the issue, producing commitments by principally European countries and Japan to reduce their CO2 emissions in 2012 by about 5% compared with 1990. Further discussions have been continued at the summits and international conferences, trying to determine additional and stricter targets, and to fashion a system in which all nations can participate. Taking action against global warming is the responsibility of current generations.

2 We must act now to reduce CO2 emissions and develop the alternatives for fossil fuels to preserve the Earth s environment. In Japan, we hope that fair and proper action is taken to determine how to reduce CO2 emissions and to cover the cost of developing alternative resources and how to decide such issues as who should bear the costs. According to Japan s Ministry of the Environment, Japan produced about billion tons of CO2 emissions from fuel combustion in 2007, equivalent to 4% of the world total. Of this amount, the CO2 emissions of the Japanese steel industry, after emissions from the electric power companies having been allotted to each electricity user based on its electricity consumption, account for 14% of the total (FY20081), the highest proportion among all the industries.

3 Since steel is essential for the society to achieve industrial development, there is a clear need to find a way to reduce CO2 emissions in manufacturing steel. There is a big difference in CO2 volume between two methods used to manufacture steel; making one ton of steel through a blast furnace method emits two tons of CO2 compared with less than tons by an electric furnace. For exactly the same type of steel, the CO2 emissions from an electric furnace mill are one fourth that of a blast furnace mill. As a supporter of industrial development, we have been recycling the valuable domestic resource of steel scrap into a wide range of steel products since Tokyo Steel s foundation in 1934, and as a company which plays an important role in establishing society where wastes are well managed through proper reusing or recycling, we have saved energy 1 Fiscal years are determined by the year in which they started, fiscal 2008 is the period from April 2008 to March 2009, the same holds hereafter.

4 2 and resources for the society. We have made uninterrupted efforts in our steel making processes as well to realize even more savings. Our efforts to promote effective recycling of steel scrap will result more reduction of CO2 and consequently contribute further prevention of global warming. And we agree to pay taxes based on emission volume of each tax payer, if it is necessary for the government to impose taxes for the purpose of researching and developing of the alternative energies, and realizing less carbon dioxide society. In the following chapters, we report on our past contributions and further contributions we are going to make and our views on the aspect of how the society, industries and individuals approach to reduce CO2 emissions.

5 3 2. A History of Our Contributions to Reducing Industry s Environmental Impact as a Scrap Recycler Steel scrap recycling has always been our main business. In the beginning, we produced so-called electric furnace products small size structural and reinforcing bars and supplied Japanese society as the fundamental materials needed for reconstructing its infrastructure after WW II. When demand grew for higher value-added materials, we entered the H beam and large-size structural markets, which were dominated by blast furnace mills. As we competed with the blast furnace mills, we also became the No. 1 electric furnace steel maker in Japan.

6 In 1990, the benchmark year of the Kyoto Protocol, we produced million tons of steel. Of this total, the traditional electric furnace products of reinforcing bars and small size structural like steel angles accounted down to and respectively, while in contrast, the share of products that compete with those of blast furnaces had risen to over half of our production, at In other words, through our supply of a growing share of traditional blast furnace products to the market at a far lower energy cost, we could contribute to reducing the environmental impact of our society as a whole. Since then, we have continued our active efforts to expand the variety of steel products that can be recycled from a valuable domestic resource, steel scrap, even to the area where had been thought difficult to be produced by electric furnace.

7 We started to produce hot rolled coil at our Okayama factory in October 1991. At the time, steel sheet product like hot rolled coil was in Japan regarded as a product that only blast furnaces could make, and its production was dominated by blast furnace mills. Steel sheets have broad application throughout industry, including automobiles, electric appliances, equipments and industrial machinery. According to a breakdown of steel production in Japan, steel sheets accounted for about of total, or 40 million tons, in FY2008. Although the technical specifications required by major customers, such as automobile, home appliance, and machinery companies, were very demanding, we improved our technology to ensure stable product quality whatever the quality of steel scrap used.

8 Working repeatedly with our customers on quality issues in the beginning, we have steadily built a base for electric-furnace-made steel sheet in the market. Redoubling our efforts, we stepped up to more products, including pickled and oiled (P & O) steel (1995) and galvanized steel (1997), expanding our presence in the steel sheet market. We also commenced production of jumbo H beams (March 1992) and sheet piles 4 (February 1994), both at Kyushu factory, and aiming to boost sales of H beams, we built the Utsunomiya factory (1995) in the Kanto area, Japan s biggest market. Notably, the Utsunomiya factory was Japan s first new steel works in ten years.

9 Among other new products, we began producing heavy plate in our Kyushu factory in February 2007. In fiscal 2008, total heavy plate production in Japan amounted to million tons, or of total steel production, and blast furnaces accounted for of that total. Heavy plate has application in civil engineering and construction and machinery and equipment manufacturing as well as shipbuilding which requires the same strict quality control as the automobile industry. As proof of that quality, Japanese shipyards started using our products in fiscal 2008. The success of our efforts to enter new markets and sell products hardly ever produced by electric furnaces is apparent in the shift in our product composition.

10 In FY2009, products competing with those of blast furnaces accounted for of our total production. FY1990 Product Composition 5 FY2009 Product Composition As shown above, we decreased the proportion of so-called electric furnace products, replacing them with products that had been dominated by blast furnace mills and other electric furnace mills found difficult to make. Throughout this process, we concentrated on achieving higher applications for Japan s valuable steel scrap resources. Since our CO2 emissions are one fourth that of blast furnaces that use iron ore and coal, it can be said that Tokyo Steel has a history of reducing the environmental impact of our industry. 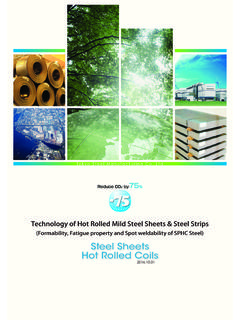 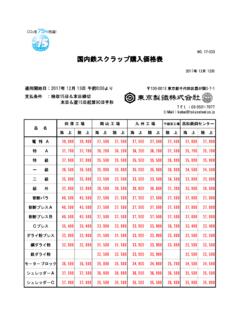 Name of Name of Prefecture, - CLAIR