2 www.tourism2025.org.nz THE ASPIRATIONAL GOAL HOW WE ARE GETTING THERE By improving the competitiveness of New Zealand tourism $41 billion total tourism revenue in 2025

2 VISITORS. IN 2013. $2300. AVERAGE. EXPENDITURE. BY INTERNATIONAL. VISITOR PER TRIP $ MILLION. DOMESTIC OVERNIGHT. BILLION. TRIPS TAKEN Tourism EXPORT. VALUE. 172,100. NUMBER OF. FULL-TIME EQUIVALENT. JOBS SUPPORTED. SOURCES INCLUDE Tourism SATELLITE ACCOUNT (2013), IVS YE MARCH 2013. BY Tourism . 2 GROWING VALUE TOGETHER. I saw a campervan the other day, with this message on the side: The glass is half full and the other half was TOTAL Tourism REVENUE. delicious. As New Zealand Tourism charts its course to $24 BILLION 2025, I took that as a very good omen. Tourism in New Zealand is a The first half was delicious. Ten years ago, Tourism was the $66 million per day industry toast of the New Zealand economy, growing at 6% a year and the country's number one export earner.

3 Recently, it's been a different story, the global financial crisis and the Christchurch earthquakes have knocked the industry back. But as we look up and out, all we see is opportunity. Globally, Tourism continues its exponential growth, driven in particular by the emerging middle classes of Asia. As a recent MBIE report put it, structural forces are very much in favour of New Zealand. The centre of the global DOMESTIC REVENUE. economy is moving closer and the long-term outlook is $ BILLION positive. Demand from these emerging markets for travel to New Zealand will soar . A shared vision and a INTERNATIONAL common framework . REVENUE. Tourism 2025 is the industry aligning for growth.

4 We can $ BILLION see the world has changed. We are excited by the new opportunities but we understand that as more and more countries enter the race for the global Tourism dollar, we will succeed only if we improve the competitiveness of New Zealand Tourism . This document presents a strategic framework for Australia $ billion achieving that. It is not a detailed plan but rather a shared vision and a common framework. In an industry as diverse China $ billion as Tourism , alignment is what matters. Tourism 2025 is an industry commitment to growing value by working UK $ billion together, for the long-term benefit of New USA $ billion Zealand Tourism and the wider economy. Japan $ billion MARTIN SNEDDEN.

5 CEO, Tourism Industry Association New Zealand Growing value together T O U R I S M 2 0 2 5 3. T H E PA S T T E N Y E A R S. IN NEW ZEALAND IN THE WORLD. OVER THE PAST TEN YEARS: OVER THE PAST TEN YEARS: Tourism 's relative contribution to GDP has Tourism has continued to grow, at an annual declined, and we are no longer New Zealand's rate of around 4%. top export earner. The growth has been strongest for emerging International visitor numbers to New Zealand destinations: Tourism to Myanmar, for have continued to grow since 2003, however the example, grew by 52% in 2012. Emerging average expenditure of those visitors has declined economies have increased their share of and so New Zealand's revenue from international international arrivals from 30% in 1980 to Tourism has declined over this period.

6 Around 50%. Domestic Tourism has grown, but not at the same rate as the rate at which New Zealanders travel Advanced economies have recognised the overseas. Over the past ten years, expenditure growth opportunity that Tourism represents by New Zealanders travelling overseas has grown and have begun competing more strongly. by 66% and is now worth over $ billion. Australia, for example, hopes to double its Tourism revenue by 2020. The number of visitors from New Zealand's largest Tourism market Australia have Most Tourism is close to home. 80% of increased. Now, 45% of international visitors are worldwide arrivals are travelling from the from across the Tasman. same region. China has emerged as New Zealand's second- China has become the world's largest nation largest Tourism market visitor numbers and value.

8 New Zealand Tourism 's aspiration is to return to the rates of growth of a decade ago and to play its part in the 12,000 growth of New Zealand's economy. 10,000 Which is why signs of recovery in some of our traditional markets are so welcome. At year-end 2013, arrivals from 8,000 the USA were up and from Germany up But $ (millions). the real news, strategically, is the growth of the emerging 6,000 Asian economies. Arrivals from China were up last year and are expected to nearly double over the next 4,000 five years. As we look ahead to 2025, therefore, there are horizons of opportunity for New Zealand Tourism : 2,000. domestically, across the Tasman, around the Pacific Rim, and beyond. 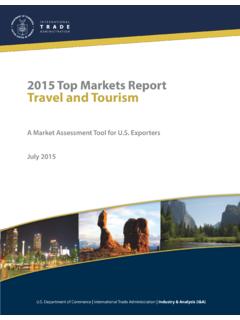