Toward a Feminist Politics? The Indian Women’s …

POLICY RESEARCH REPORT ON. GENDER AND DEVELOPMENT. Working Paper Series No. 9. Toward a Feminist politics ? Despite a longstanding and vigorous women 's movement The Indian women 's movement with patriarchy many achievements, remains deeply in historical perspective entrenched in India, influencing political and social institutions and determining opportunities available to women and men. To better understand the challenges Samita Sen facing the women 's movement , this paper explores two debates that have rocked the movement and Indian society more broadly- over the Uniform Civil Code and the proposed reservation for women of seats in legislative bodies. April 2000. The World Bank Development Research Group/. Poverty Reduction and Economic Management Network The PRR on Gender and Development Working Paper Series disseminates the findings of work in progress to encourage the exchange of ideas about the Policy Research Report. The papers carry the names of the authors and should be cited accordingly.

1 POLICY RESEARCH REPORT ON. GENDER AND DEVELOPMENT. Working Paper Series No. 9. Toward a Feminist politics ? Despite a longstanding and vigorous women 's movement The Indian women 's movement with patriarchy many achievements, remains deeply in historical perspective entrenched in India, influencing political and social institutions and determining opportunities available to women and men. To better understand the challenges Samita Sen facing the women 's movement , this paper explores two debates that have rocked the movement and Indian society more broadly- over the Uniform Civil Code and the proposed reservation for women of seats in legislative bodies. April 2000. The World Bank Development Research Group/. Poverty Reduction and Economic Management Network The PRR on Gender and Development Working Paper Series disseminates the findings of work in progress to encourage the exchange of ideas about the Policy Research Report. The papers carry the names of the authors and should be cited accordingly.

2 The findings, interpretations, and conclusions are the author's own and do not necessarily represent the view of the World Bank, its Board of Directors, or any of its member countries. Copies are available online at http: Toward a Feminist politics ? The Indian women 's movement in historical perspective Samita Sen Department of History Calcutta University Abstract The women 's movement in India took off in the 1920s, building on the 19th century social reform movement . The women 's movement progressed during the period of high nationalism and the freedom struggle, both of which shaped its contours. Among the many achievements of the movement , the most significant were the constitutional guarantees of equal rights for women and universal adult suffrage in independent India. However, these guarantees did little to bring about social and material change in the lives of most Indian women . A New women 's movement , articulated to mass and popular politics , emerged in the 1970s.

3 Despite the longstanding and vigorous women 's movement , patriarchy remains deeply entrenched in India, influencing the structure of its political and social institutions and determining the opportunities open to women and men. The negotiation and conflict between patriarchy and the women 's movement are central to the constitution of the nation-state. This paper explores these issues by examining two debates that have rocked the women 's movement and Indian society: over the Uniform Civil Code and the proposed reservation for women of seats in legislative bodies. These controversies have contributed to and bear the mark of deep cleavages within the women 's movement cleavages that reflect divisions of caste, class, and community among women . To understand the full implications of these controversies and their divisive consequences, it is essential to understand their long-term historical roots. The discussion here draws out various positions within the women 's movement and arguments advanced by the government, the media, and others.

4 The significance of a secular political constituency of women , as represented by the women 's movement , is also considered. For: The World Bank Policy Research Report on Gender and Development: Engendering Development Background paper on the women 's movement as a contribution to: Contesting Patriarchy women 's Organizations, Civil Society, and Grassroots Change in India. An Introduction to India's women 's movement The term Indian women 's movement is highly contested. The appellation of Indian , when used for the women 's movement , implies a political and cultural singularity that obscures the movement 's diversity, differences, and conflicts. The problem is not simply one of disunities but rather has to do with intractable conflicts involving the word women that derive from the central position of gender in post- colonial Indian culture and politics . Indeed, processes of gender the construction of identities, roles, and relations based on sexual differences played a key role in the historical formation of the Indian nation- state.

5 But gender cannot be separated from other, conflicting political identities, all of which play a crucial role in the life of the nation. The Emergence of Gender Issues Gender has been a central issue'in India since the colonial encounter. An overwhelming preoccupation with the woman's question arose from the 19th century social reform movement , crucially informed anti-colonial nationalism, and remains a point of crisis in India's cultural, social, and political space. The recognition of gender as an issue forms the basis for India's women 's movement . One prominent gender concern was status that is, the rewards and benefits that accrued to women on India's journey to self-determination, statehood, democracy, progress, modernity, and development. In 1974 the Indian government published a report, Towards Equality, that put status of women forcefully on the national agenda by arguing that the position of Indian women had declined, not improved, since 1911. (Committee on the Status of women 1974).

6 As a result development and progress became gender issues. Data on gender discrimination in employment, education, land distribution, inheritance, nutrition, and health became impossible to overlook. At the same time violence against women was on the rise and widely reported in the media. There were cases of rape in police custody, wife murder (usually called bride-burning or dowry deaths) on a large 1. scale, and sexual harassment in the workplace and on the street. women 's issues entered the fields of culture, religion, and law; of family and community structures; of the problems of and official responses to population, poverty, illiteracy, and labor; and of the new social movements of dalits, environmentalists, tribals, anti-dam activists, peasants, and trade unions. Rajeswari Sunder Rajan, taking stock of the 50th independence celebrations, comments that in all these discourses, disciplines and sites of action, gender began to figure as an issue'as well as a category of analysis (Rajan 1999: 3).

7 The Search for Cohesion The recognition of gender as an issue powered the post-colonial women 's movement , supported by Feminist critiques and women 's studies in academia. women mobilized to protest violence, legal discrimination, and rising prices and agitated for better living conditions through higher wages, the prohibition of liquor, and the provision of drinking water (Rajan 1999: 3). These women represented a wide range of castes, classes, and communities, rural and urban. But differences among these women grew, fracturing not only the category of women but also solidarities among them. In 1986 the developing tensions were exposed and fueled by the Shah Bano case. Discrimination against women in personal law had been on the women 's movement 's agenda since the 1920s, but the Shah Bano case catapulted the issue into a crisis of national proportions. The case intensified a process in which nationalist ideology, religious fundamentalism, communalism, and caste tensions were pitted on the site of gender.

8 Thus embattled, women and their movement lost the fragile unity and broad identity in which their differences and diversities were contained in the first phase of their active political engagement. Today the women 's movement in India is deeply cleaved. There is, nevertheless, a vigorous search for a viable Feminist politics . To succeed, feminists must develop transformative politics , managing and (hopefully) transcending class, caste, and community differences (Rajan 1999). 2. This paper addresses this critical challenge. It seeks, through historical analysis, to understand the cleavages in the women 's movement by examining the two most divisive issues before it: the Uniform Civil Code and the move to reserve for women one-third of the seats in legislative bodies. But it also mines the promise of a transformative ( Feminist ) politics . Today there is not one women 's movement in India, an overarching collective in which gender politics is articulated. Yet the multiplicity of sites, disciplines, and discourses makes for vibrant gender politics .

9 Although women often define and identify themselves through difference and conflict rather than through similarity or common belonging, this paper uses the term women 's movement . This approach is justified because analytical categories often must indulge in abstraction from the perceptions and definitions of social actors, so the term can be used to indicate a variety of campaigns around issues important to women (Kumar 1995). Moreover, I wish to affirm the possibility and even necessity for a women 's movement to exist, to offer women the possibility of a space outside the structures, if not also the identities, of community. Identity, Colonialism and Independence, and the Nation-State The primary identity of an Indian , male or female, is citizenship whose basic definition offers a promise of equality and justice within the nation's democratic constitutional framework. Repeatedly, however, this promise is undermined by the masculinity of nationalist ideology, the fiction of citizenship, and the malleability of law.

10 Instead of offering an alternative space, the nation often simply functions as an extension of family, caste, and community structures and defines women as belonging in the same way as their structures. This definition of belonging is contradictory, implying both affiliated with and owned by. The first interpretation connotes voluntary, participatory membership; the second a secondary, functionalist, and symbolic status (Rajan 1999). And both are constantly overlooked because social and political order is defined through women 's ownership by and place in structures of family and community. 3. This paper began by positing the problem of gender within the matrix of the post-colonial nation- state. The four elements of this term are significant. We have already considered the role of the nation in understanding gender and vice versa. In that story India's colonial past is also critical. The colonial period is considered a watershed in gender relations. During that period modernity was set in motion through colonial and indigenous initiative. 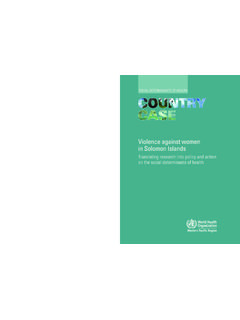 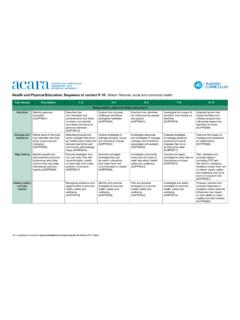 Health and Physical Education: Sequence of …

Community Engagement in Public Health Introduction The public health issues of the 21st century include chronic diseases (such as cancer, obesity and

4. THE ONTARIO CURRICULUM, GRADES 1 8 | Health and Physical Education. A variety of factors, known as the “determinants of health” (discussed in this document