Child ProteCtion inForMAtion Sheet Child trafficking affects children throughout the world, in both industrialized and developing coun-tries. trafficked children are subjected to prostitu-tion, forced into marriage or illegally adopted; they provide cheap or unpaid labour, work as house serv-ants or beggars, are recruited into armed groups and are used for sports. trafficking exposes children to violence, sexual abuse and hiV infection and violates their rights to be protected, grow up in a family environment and have access to child victim of trafficking is any person under 18 who is recruited, transported, transferred, har-boured or received for the purpose of exploitation, either within or outside a country.

1 Child ProteCtion inForMAtion Sheet Child trafficking affects children throughout the world, in both industrialized and developing coun-tries. trafficked children are subjected to prostitu-tion, forced into marriage or illegally adopted; they provide cheap or unpaid labour, work as house serv-ants or beggars, are recruited into armed groups and are used for sports. trafficking exposes children to violence, sexual abuse and hiV infection and violates their rights to be protected, grow up in a family environment and have access to child victim of trafficking is any person under 18 who is recruited, transported, transferred, har-boured or received for the purpose of exploitation, either within or outside a country.

2 The use of illicit means, including violence or fraud, is irrelevant. ending trafficking will require international, regional and national cooperation. root causes poverty, discrimination, exclusion and violence need to be addressed along with the demand and Figures the invisible and clandestine nature of traffick-ing and the lack of strong data collection make it difficult to know the global number of child vic-tims. however, according to the latest estimates available, some million children are trafficked worldwide every in east Asia and the Pacific, most trafficking is into child prostitution, though some children are also re-cruited for agricultural and industrial work.

3 In South Asia, trafficking is often related to debt in europe, children are mainly trafficked from east to west, reflecting the demand for cheap labour and child prostitution. BuiLding a PrOtectiVe enVirOnMent FOr chiLdren government commitment and capacityto protect child victims of trafficking , governments must ratify international legal standards that address all forms of exploitation, as well as de-velop bilateral agreements to facilitate cross-border cooperation. Poverty-alleviation policies are critical to a comprehensive anti- trafficking strategy. And non-discrimination, the best interest of the child and equitable participation are the core principles for establishing durable and enforcementFar too often, trafficked children are arrested and detained as illegal aliens, rather than recognized as the victims.

4 The prosecution of criminals needs to be complemented with legislation that focuses on protecting child victims. law enforcement needs to ensure that children in custody have access to their families and other support , customs and practicesinequality between men and women, boys and girls contributes to child trafficking . Abuse will also flour-ish if it is socially acceptable for men to purchase sex with children, for families to use children as domestic servants, or if sending children away from their families becomes a survival strategy in response to conflict and other rightsthe convention on the rights of the child (1989) asks States Parties to take all appropriate nation-al, bilateral and multilateral measures to prevent the abduction of, the sale of or traffic in children for any purpose or in any form (Article 35) and to promote physical and psychological recovery and reintegration of a child victim (Article 39).

5 Optional Protocol to the convention on the rights of the child (2002) on the sale of children, child prostitution and child pornography further defines these standards. the optional protocol to the un convention against transnational Organ-ized crime (2000), known as the Palermo Proto-col, for the first time defines trafficking in human beings. iLO convention 182 on the Worst Forms of child Labour (1999) includes child trafficking . Open discussionthe participation of media and civil society can in-form and educate communities about the dangers of trafficking . But the rights of the victims need to be ensured at all times, and sensational reporting should be avoided as counterproductive.

6 Children s life skills, knowledge and participationthe concept of child agency defines children as thinking individuals and decision-makers who have the right to express opinions regarding choices that affect them. While adolescents need to learn how to recognize false employment of-fers, they also need respect for their aspirations towards legitimate and safe of families and communitiesto protect and assist vulnerable children, parents, teachers, police, health and social workers need skills, capacity, knowledge, authority and motiva-tion. But increases in trafficking are most often as-sociated with the breakdown of families abilities to care for their children.

7 Strengthening existing wel-fare systems and improving reliable access to these services are the core of successful services, including prevention, recovery and reintegrationFull access to child welfare services, health and ed-ucation should be granted to children, regardless of their legal status. Specific services may range from the immediate appointment of a guardian for identified child victims to creating youth centres that help exploited children re-enter , reporting and oversight activitiesStates should create effective monitoring and oversight mechanisms to collect reliable data and information. these activities can be especially effective when community-based.

8 Once accurate information has been collected, procedures should be in place for sharing and analysis at the interna-tional OF UNICEF in actiOnUni CeF is part of the United nations inter-Agency Project on human trafficking in the greater Mekong subregion, established in June 2000 to facilitate a stronger and more coordinated response to hu-man trafficking in Cambodia, China, lao People s democratic republic, Myanmar, thailand and Viet nam. the project aims to strengthen the regional response to human trafficking through improved knowledge, effective collaboration and better tar-geted action. in 2005, Uni CeF and the united arab emirates signed an agreement to return children involved in camel racing, many of them victims of trafficking , back to their countries.

9 According to recent statis-tics, more than 1,000 child camel jockeys mostly from Bangladesh, Mauritania, Pakistan and Sudan have been sent home and many have been re-united with their families. Uni CeF provided techni-cal assistance and expertise. As follow-up to this initiative, in 2006, Uni CeF helped organize the first ever workshop on combating child trafficking in the arab world. nine countries were represented at the event: Bahrain, egypt, Jordan, Kuwait, lebanon, Qa-tar, Saudi Arabia, United Arab emirates and Yemen. notes1 i nternational labour organization, A Future without Child Labour, ilo, Geneva, 2002, p.

10 United nations Children s Fund, The State of the World s Children 2006: Excluded and invisible, Uni CeF, new York, 2005, p. further information please contact:the Child Protection SectionProgramme division UNICEF the United nations Children s Fund ( UNICEF ) May 2006 MiLLenniuM deVeLOPMent gOaLsAchieving MdG 1 to eradicate extreme poverty and hunger will eliminate the conditions that are a root cause of trafficking . Because this dan-gerous human rights violation prevents a child from going to school and can lead to infection with sexually transmitted diseases, protecting children from trafficking will support universal primary education (MdG 2) and help halt and reverse the spread of AidS (MdG 6). 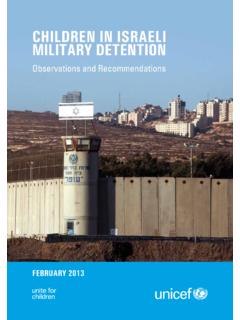 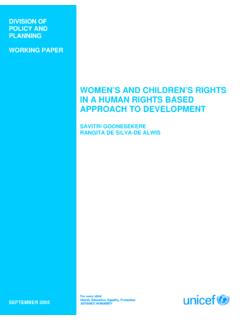 WOMEN’S AND CHILDREN’S RIGHTS IN A - UNICEF 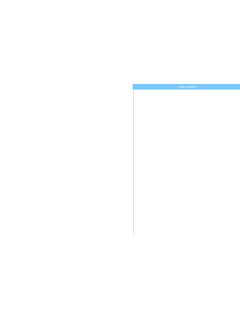 Implementation Handbook For The Convention On …

FACT SHEET: A summary of the rights under the Convention on the Rights of the Child Article 1 (Definition of the child): The Convention defines a 'child' as a person below the age of 18, 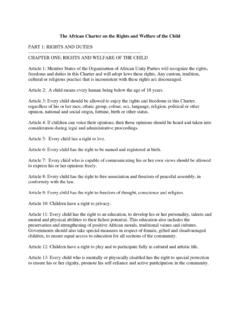 DECLARATION OF THE RIGHTS OF THE CHILD

- 164 - ' 2003 Steven T. Walther All rights reserved. DECLARATION OF THE RIGHTS OF THE CHILD [Proclaimed by General Assembly … 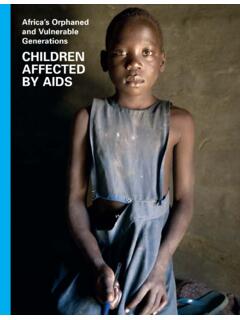 (ages 0–3) is at stake when their moth-ers are dying or have recently died. This is true whether the mother dies of AIDS or other causes. Children of this 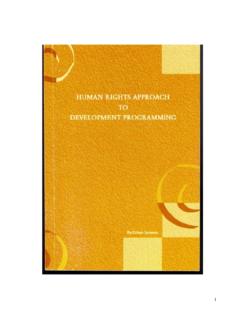 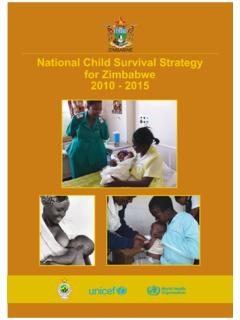 OTHER MODULES IN THIS COMPANION SERIES: …

Series, Other, This, Module, Companion, Other modules in this companion series 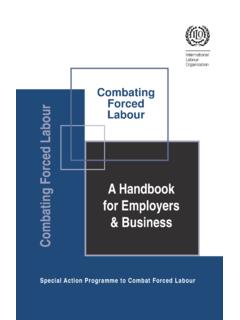 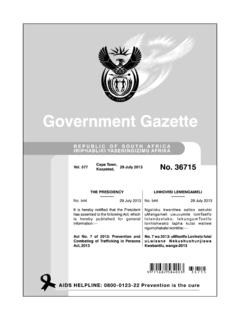 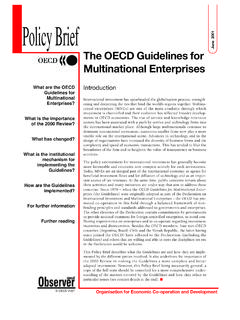 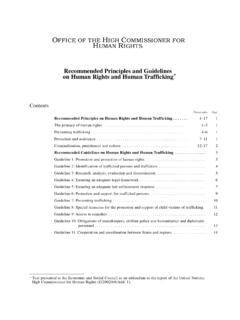